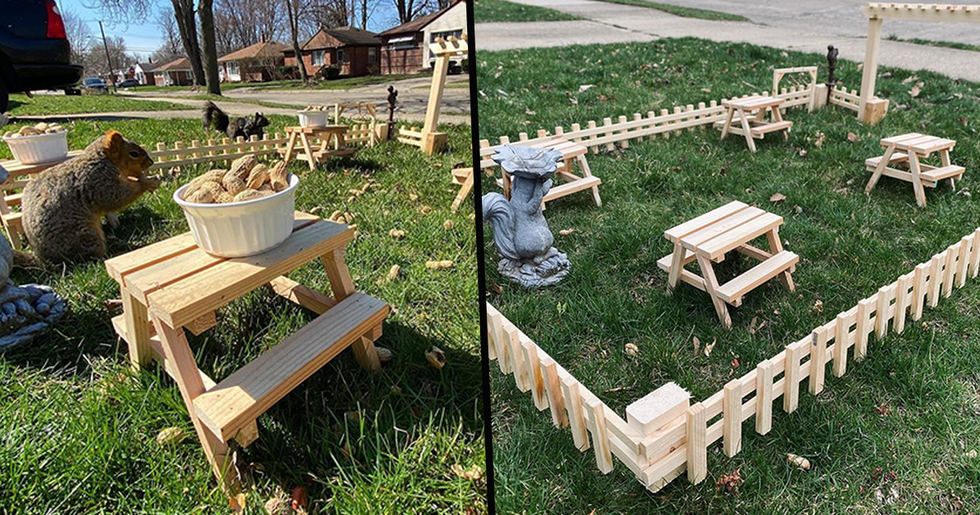 Man Builds Tiny Restaurant for Animals in His Yard During Lockdown

While bored in lockdown, a man in Detroit decided to lend a helping hand to his local squirrels by building them their very own miniature wooden restaurant in his backyard... And his finished result is simply incredible.

If there's one good thing to come out of this current pandemic...

It is that our natural planet is thriving.

It is one of the more unexpected side-effects of the medical crisis.

While humans have been forced to remain indoors in self-isolation, our planet has finally been given the chance to heal.

The sudden lockdown of major cities has resulted in some pretty remarkable changes.

Levels of toxic air pollutants and warming gases over major cities and regions have been showing significant drops as the pandemic impacts work and travel.

And, while our streets remain deserted...

Our animals have gradually been coming out of hiding.

The lack of human interference means that our animals can go about their lives undisturbed...

And they have been coming out in full force, including species that have been deemed as endangered as a result of our impact on the Earth.

Remarkable images from our healing planet have been emerging from all over the world...

The Venice canals, once polluted and overcrowded with gondolas full of tourists, are now clearer than ever before, meaning that their native wildlife can now return to where they belong.

And all the way in Wales, the mountain goats have made a comeback to the streets.

Residents have been reporting more sightings of their native mountain goats who, as a result of the lockdown, are feeling confident enough to roam the streets to graze once more.

And here in the States?

Spotted on the playground at the elementary school next door, which has been closed for several days ... wild turke… https://t.co/hMcW6LULy4
— Charlotte Simmonds (@Charlotte Simmonds)1584745768.0

But it is our squirrels, in particular, who are thriving.

All across America, high numbers of wild squirrels have been spotted in both our parks and our back yards.

Santa Monica has been completely overrun by the critters.

People have been taking to Twitter to share footage of the parks in the LA city, which are now dotted with snoozing and foraging squirrels.

It's heartbreaking to see the blatant impact we've had on the environments of these beautiful creatures, so it's great to see them finally thriving in their habitats.

It's devastating that it has taken a full-fledged medical pandemic for our animals to thrive...

So, while in lockdown, one man decided to extend a helping hand to his neighborhood critters.

James Vreeland classes himself as somewhat of a handyman...

And his Instagram page is full of pictures of his nifty little creations.

So, what better way to spend his lockdown...

Than dabbling with a little bit of craftwork?

James wanted to give his local wildlife a little something to enjoy while the humans are locked down...

And what's more enjoyable than a restaurant?

James decided to give the critters their own miniature restaurant...

And it looks incredible. Crafted with tiny pieces of wood, James managed to construct tables, chairs, and even an ornate entrance and fencing for the tiny little eatery. Oh, and he left out plenty of tasty and nutty snacks for the diners, of course.

The recently-opened restaurant was also given a fancy name - Maison du Noix - which translates to “The Nut House."

It looks fit for a Queen, doesn't it?

There's even an official menu.

“We’ve been offering an opening course of a seed medley, followed by peanuts on the full shell, house-cut breadsticks, and a dessert of counter-softened apples," James told local media.

And, so far, the restaurant has proven to be very popular with the locals...

Both the animals and the humans. “The squirrels and blue jays have been loving it," James explained. “The response from humans has been pretty great too with people stopping all the time to take a photo or watch the frenzy."

You can see a video of James' masterpiece here.

He really is paving the path for a future of wildlife fine dining. For more on how our animals are benefiting during this pandemic, keep scrolling...