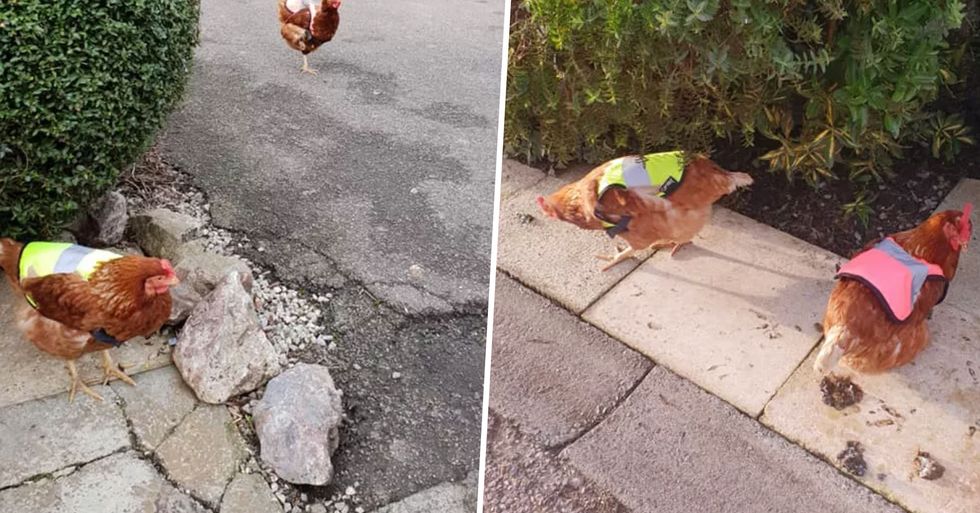 It's no secret that pet owners love to dress their pets in adorable outfits, and it's not just for special occasions.

One man has bought his chickens the cutest get up, and the internet loves it. Keep scrolling to see some impressive costumes...

Has our obsession with animal costumes got out of hand?

While there are many varieties of costumes for our beloved pets, some actually come in pretty handy to keep them safe.

One man has gone above and beyond for his chickens.

And the outcome is very cute. But first, let's take a look at some of the best pet outfits we've ever laid eyes on...

One hell of a good boy.

As you can see, this outfit clearly isn't related to any holiday, but I'm not complaining.

I'm not quite sure where he's going.

But I'd hire him.

You can see the disappointment in his eyes.

Beauty or the beast?

The only beast here is the owner of this poor pup.

That's me never breaking the law.

Put it all on red!

I wouldn't want to go against this guy at a poker game.

What can't cats do?

Think it's time to take a look at your life.

When you have a whole rack dedicated to animal bodysuits.

But it's not just cats and dogs getting dolled up.

This man has bought something pretty unique for his chickens and the internet loves it...

And the plan was to let the chickens roam freely around their yard.

But it didn't exactly go to plan.

The birds, who are named Davina and Deirdre, had different ideas.

They wanted to be allowed out to roam free, outside of the yard.

Williams soon gave in, and let them go beyond the confines of their garden.

The birds tend to stroll 5 miles every day.

That's something I could only dream about in lockdown.

But as the days started to get darker faster, he was worried about their safety.

Williams wanted drivers to be able to see the chickens should they venture into the road.

So the only obvious solution was buying them both high-visibility jackets to wear.

One yellow and one pink.

Williams bought them from Omlet, which specializes in clothing just for chickens.

Williams confirms the chickens have been in higher spirits since being able to forage for their own food.

They both lay an egg before they leave for the day.

And according to Williams, the eggs taste so much better.

Let's hope Davina and Deirdre stay safe out there!