Man Catches Phone Dropped by Another Person on Rollercoaster | 22 Words 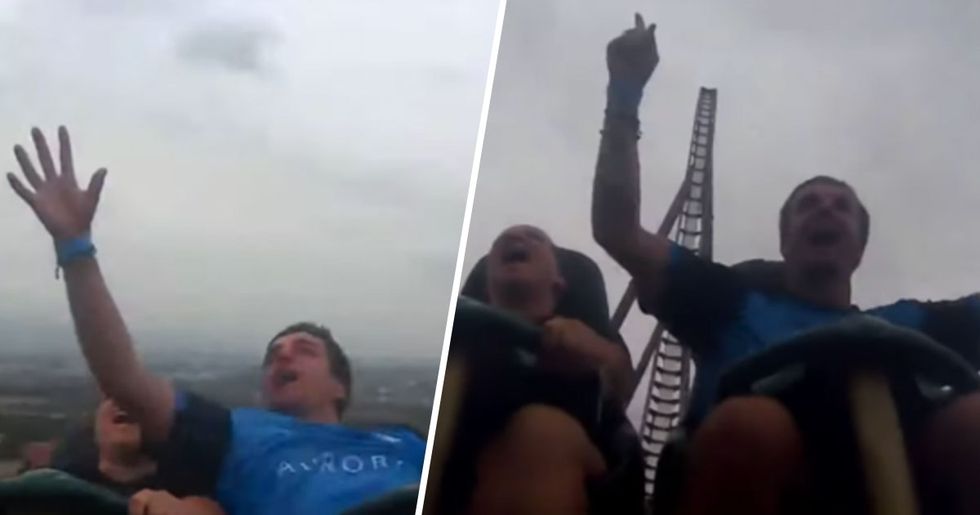 Man Catches Phone Dropped by Another Person on Rollercoaster

Depending on who you are, you might find rollercoasters either completely thrilling or absolutely terrifying.

One thing that's for sure, though... whoever you are, there is something really important to remember when riding a rollercoaster. When you're soaring high in the air at breakneck speeds, twisting this way and that, being thrown upside down and having your stomach do somersaults, you need to keep your possessions tightly secured.

One foolish rider on the Shambhala rollercoaster at the Spanish PortAventura Park did not follow this golden rule. Fortunately for them, when their iPhone X went flying through the air, a fellow rider did the unthinkable and caught it.

The footage of the impressive catch was caught on the Shambala ride dashcam and has since gone viral -  keep scrolling to watch the exciting footage!

There two kinds of rollercoaster riders...

First, there's those that find it totally terrifying and struggle to refrain from screaming the whole way around. These are the people that will tightly squeeze your hand and will more than likely keep their eyes shut throughout the whole ride. The other kid of riders are those that absolutely love it and will beam from ear to ear through the duration of the ride. They might even shout "woo," or even, "faster!"

Then there's those that consider themselves "Coaster Experts."

You know the sort, with an arm full of theme park wristbands - they might even be wearing a Disney World t-shirt. These guys will inevitably try to take the ride experience to the "next level." A good example of this is eating while riding. When they do this they're saying: "yeah that's right, I'm so unphased by this I'm just casually eating my lunch. I'm only riding for the views."

Admittedly, the views are a selling point.

One good thing about getting launched high into the sky by a rollercoaster is the impressive views. Obviously, if, like me, you keep your eyes shut the entire time, this isn't really a selling point.

There's something cinematic about rollercoaster views.

Everything goes by so quickly too, so it's little wonder that some people do take their phones aboard in an attempt to capture the sights.

I'm with Shania on this one...

Rollercoasters are terrifying enough without adding another element of risk. I mean, how can you even peel your fingers from the metal bar? How can you be sure that you are really secure? Holding on, in my opinion, is a necessary safety precaution.

So many movies, TV shows, and music videos use rollercoaster rides and the theme park aesthetic.

There's something romantic about rollercoaster rides...

I mean, what better way to show your date how stable you are in everyday life than riding on a terrifying rollercoaster and remaining totally chill? Also, getting close on a rollercoaster as a consequence of the sheer fear that you are experiencing is much more effective than the old arm-over-the-shoulder in the cinema move.

Not that everyone can pull off "rollercoaster-cute."

Frankly, when getting spun through the air at high speeds on a terrifying ride, I can't say I look my best.

If you do coaster as cute as these guys...

I can understand why you might want to document the experience by getting your phone out and taking a photo. I mean, getting a short vid for the Instagram story can't hurt, right?

Maybe if you're sure that you can keep a tight hold of your phone, it could be worth taking a few cheeky shots.

Sometimes rides have cameras built into the circuit so that you can commemorate the experience with a novelty keyring or such like.

The Shambhala rollercoaster was installed with a dashcam.

This meant that when YouTuber, "sirsammy15," and his lady friend went on the ride, the whole thing was recorded.

Fortunately, the rollercoaster did have a dashcam...

Otherwise, Sirsammy15's impressive moves would have gone unnoticed by the world. Surely, this must have one of the greatest moments of this guy's life. A bit like when I got a banana skin in a trashcan while riding my bike. Best day ever.

"Did you just see that?"

In the video, you can see the guy turn to his riding companion after catching the iPhone X to see whether she had witnessed his epic moves.

How did he even notice the phone?

This sure is one guy with amazing reflexes. If I had been on the rollercoaster, I certainly don't think that I would have noticed the phone flying past me.

Can he reach it?

For a second, it doesn't seem as though he'll manage it. Tightly secured in his seat, there's only so far he can lean out of the rollercoaster carriage to try to reach the phone.

Amazingly, as though he's some sort of superhero or professional baseball player or something, the guy catches the phone!

Imagine how good that must have felt!

It's no surprise that he decided to post the impressive footage on his Youtube channel. Alongside the video, he posted a short explanation, saying: "Long story short I caught it. This roller coaster is moving at over 130kms…was once Europe’s tallest and fastest coaster.. only recently beaten."

Whoever it was that dropped their phone on the ride probably thought that it would be lost forever.

Dropping your expensive iPhone X while riding on a rollercoaster, you're going to think one of two things. You will either accept that it's lost forever and there will be no way to recover it from the cornered off the land around the rollercoaster, or you might suppose that it is potentially retrievable, but that it will be totally smashed.

We're pretty sure that no one thought that there was a catching whizz on board...

Lucky for whoever dropped the phone, someone on board was a catching expert.

Since the video went viral, eagle-eyed viewers spotted something else...

Not only did the guy catch the iPhone X while traveling on a rollercoaster at speeds of 130kms - but they were riding during a lightning storm!

If there's one place to avoid during a lightning storm...

It's a giant metal contraption and the difference between life and death relies almost entirely on the electric mechanics working efficiently.

Check out the video here:

Keep a careful eye on the guy, the catch happens so fast that it's easy to miss!

What a hero, right?

Since the video went viral, the internet is in agreement that this guy is a true legend of our time. For another display of incredible catching-skills (this time they're literally life-saving), keep scrolling!