Man Caught Cheating After Being Exposed on Kiss Cam | 22 Words 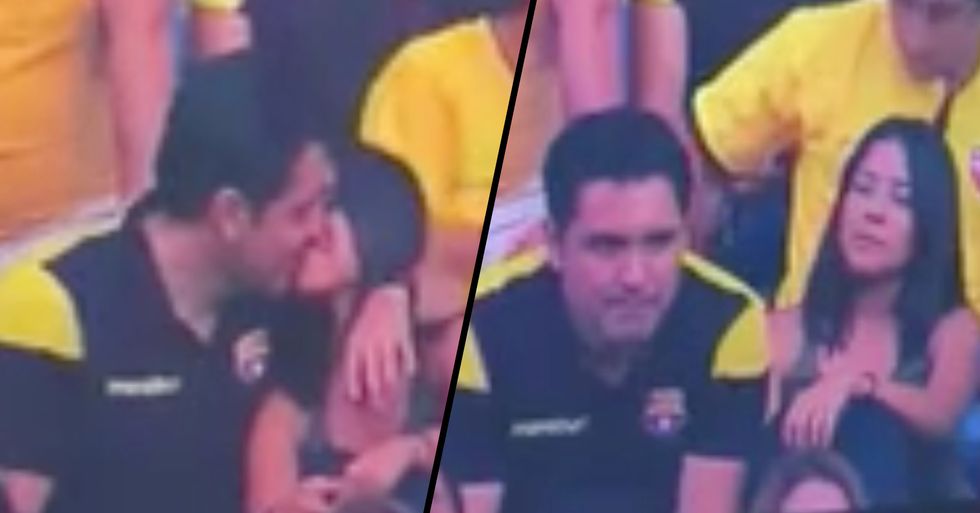 Man Caught Cheating After Being Exposed on Kiss Cam

Ah, the kiss cam. It's surely spanned some of sport's most awkward moments. But the latest cringe-worthy kiss cam moment might well be the worst yet.

At a soccer match in Ecuador, a man was spotted smooching a lady - until they realized they were being filmed, that is. And now the reason for their sheepish demeanor has been revealed - and it's just as weird and sketchy as you're expecting.

Watching your favorite team play live is a thrill that's not like any other.

There's a lot of fun to be had in the stands.

The atmosphere of being surrounded by fellow fans can lead to some extreme excitement.

And there's something else that heightens the fun.

Ths kiss cam is a notorious way for sports fans to get into some surprisingly awkward scenarios.

It's designed to be a cute way to spread the love.

But more often than not, it tends to err on the side of cringe.

But one kiss cam moment has gone viral this week.

But it's for all the wrong reasons.

Because at a soccer game in Ecuador this week ...

The camera panned the crowd to what looked to be a cute coouple.

But rather than going in for a sweet smooch?

Well, they just looked plain old awkward - and no one was sure why.

And, as for the kiss that followed...

Well, they looked basically like they were being forced into it. Weird stuff!

The internet had just one question.

Why were this couple so reluctant to be spotted smooching on camera?

Well, the internet immediately had a theory.

And it made the awkward moment make a lot more sense. Many believed the couple was actually in the midst of an affair.

Why else would this pair appear so sheepish about their kiss?

Other than the fact it was not supposed to be made public, that is.

The internet was exactly right. An affair, caught on camera - by a kiss cam, of all things.

And, amazingly, the man captured on film has spoken out.

Deyvi Andrade took to Twitter to confirm what was painfully obvious - and to defend his silly actions.

But rather than expressing any regret?

He was quick to jump into the victim role, claiming he'd been the injured party in all of this.

In fact, he claimed the reason people have been blaming him was because he's a man.

"If it was a woman was in my place what would you do? Various videos have been circulating of unfaithful women but they haven't been made fun of as much as me."

"I hope you never have to be in my position."

"I'm going to defend my honor and my pride as a man until the end... We all fail and we all repent, thank you to those who have invited me to church and if I go it is so I can heal my family."

"No one is going to be able to damage my image."

"God is big and strong and these women who are criticizing me, I know too have cheated but they still comment."

"You've already destroyed my relationship, what more do you want?"

"I hope this doesn't serve you in any way because you are only hurting a son of God."

"You don't know the psychological damage you have caused with your hatred directed at me."

"Everyone fails and we can forgive from our hearts. God give me strength!"

Although it seems the internet doesn't feel too bad about it...

The fact this man can't seem to accept even a small part of the fault makes us hope his poor wife kicks him to the kerb for good! Want to read about another bizarre way a man was caught in an affair? Keep on scrolling - it's a pretty hilarious story.