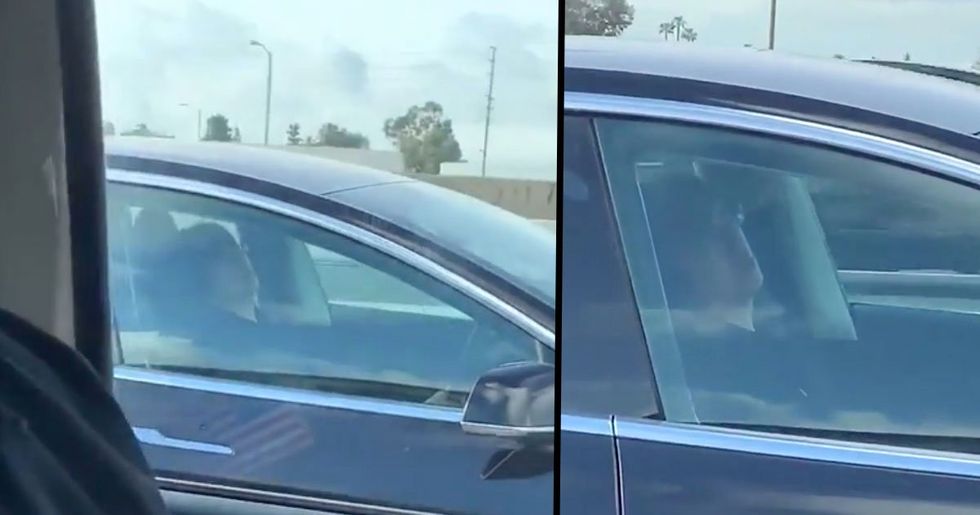 Man Caught Sleeping At The Wheel As Tesla Goes 75MPH

Sleepiness is the cross most of us have to bear. In exchange for such constant connection to the whole wide world, technology overtaking our brains, and the fast-paced nature of society in general, it's no surprise most of us crave an extra few hours in bed. But that's exactly where the extra hours of sleep should be happening - in a bed.

One man took things to the next level, though. He was spotted on Highway 101 in Palo Alto, California, catching some zs behind the wheel of his moving vehicle. To make matters even more terrifying, the car was going at around 75 miles per hour, or 120 kilometers per hour.

A video of the tired driver quickly went viral, although reactions have been mixed. Many view it as something frightening, while for others, it's an exciting indicator of the future of automated driving. Others weren't convinced by the video at all. We'll let you judge for yourselves.

Feeling a little sleepy is something we can all relate to.

Maybe it's the modern world, maybe it's just the human condition. Either way, no matter how many hours we get, it seems like we could always do with a little extra sleep.

And when it comes to our beds?

It's safe to say we're in a pretty committed relationship. They're hard to leave in the morning, but oh boy, does the moment we're reunited in the evening make up for it!

Sometimes it feels like the rest of the day is an uphill struggle.

Staying awake can be tricky, and for those having a particularly sleepy day, we can totally sympathize. Sleep is the best.

But there's one place which is really not suited to napping.

We can get on board with dozing off on the couch. We can even allow catching a few zs on a bus or a train. But if you're driving? That's a place you pretty much need to be awake.

Sleeping in your car is a pretty big no-no.

If you're driving, that's what you need to be focusing on. No matter how good you are at multitasking, there's no way you can sleep and drive at the same time.

In fact, tried driving is known for being quite dangerous.

Some tests have shown it to have as adverse an effect as driving under the influence of drugs. And that's when the participant is still awake! We dread to think what would happen if they were actually sleeping.

It can actually put those around you at a real risk, too. Imagine speeding down a highway, looking over, and seeing the driver next to you fully asleep behind the wheel.

Well, for this Twitter user, there's no need to imagine.

Seth Blake shared a terrifying video he'd taken while driving in Palo Alto, California. The man next to him appears to be fully asleep behind the wheel - in spite of the car moving at a pace of around 75 mph!

Technology has come a long way.

Self-driving cars are no longer just the stuff of futuristic science fiction - they're a reality. And they're something that's likely to become more and more prevalent.

Sure, a self-driving car still conjures up a rather cartoonish image.

But the leading models are a far cry from Lightning McQueen. They are real, and becoming more and more readily available - and many claim they're actually far safer than cars operated by human beings.

The cars operate using a complex system of sensors.

They can sense objects around them and, using interactive maps, can get you from A to B without you having to do much at all. They're far less capable of human error, too - such as falling asleep while in motion.

One of the leading innovators in the game is Tesla.

Owned by internet favorite Elon Musk, the brand has been a pioneer in terms of sustainability, alongside taking a distinct interest in self-driving technology.

Self-driving cars were once seen as something of a joke.

The idea of putting all our trust into something non-human did seem frightening in the past - but as technology expands, that's now basically something we do every day. Self-driving cars are set to become a big deal, and soon.

We can absolutely see the appeal.

Driving can be quite dull, so wouldn't it be great if you could get on with some other tasks while your car did all the hard work and thinking for you?

Think of the possibilities!

You could spend your usual driving time reading a good book, learning a new skill, or even chowing down on your favorite snacks.

But what about sleeping behind the wheel?

Something about that just seems a little bit too out of control. Technology seems fallible, and it seems like you should at least be present to take over, just in case.

Reactions to the crazy video were mixed.

Some found the whole thing super exciting, and a thrilling indicator of what amazing technological advances the future holds. The relaxed image of the sleeping guy made some pretty jealous.

Other's pointed out that the shock value of the clip was just that.

While it's viscerally quite frightening to see someone sleeping behind the wheel of a fast moving vehicle, it's actually not as unsafe as it seems. We're just so conditioned to think that driving requires our full attention - but things are changing.

In fact, self-driving cars could end up being safer.

@exfactorbass @SethWageWar @Tesla As a cyclist and someone who has been in an autonomous vehicle, I can tell you th… https://t.co/xcxDE6kVrE
— Jack Hon (@Jack Hon)1551764447.0

Humans are inclined to believe that we're better than machines - but in terms of reliability and attention span, this simply isn't the case.

Although some just couldn't quite get over their instincts.

It is hard to overcome the initial feels of panic that you immediately experience when seeing someone asleep at the wheel - even if your rational mind is aware that things might not be as dangerous as they seem.

Some pointed out the video shows more than one reckless driver.

The person who videoed the snoozing man was also not paying full attention to the road - and he didn't even have technology on his side to keep things safe!

However, the internet isn't sure whether to buy it.

Many think the whole thing may have been a stunt. Some think the man is just squinting, while resting his hands at the bottom of his wheel - and not fully asleep at the wheel, like the video suggests.

Some thought the video taker was simply mistaken.

It does initially look as though the driver's eyes are fully closed - but there's a good chance they may actually be slightly open. People aren't sure whether it's a hoax, a misunderstanding, or the genuine article.

It's believed Tesla does have the technology for fully self-driving vehicles.

But it seems the kind of technology that would be needed for safely undertaking a full snooze behind the wheel is not yet available to the public.

According the the Tesla site, the commercial autopilot is more of a helper than the boss.

"Your Tesla will match speed to traffic conditions, keep within a lane, automatically change lanes without requiring driver input, transition from one freeway to another, exit the freeway when your destination is near, self-park when near a parking spot and be summoned to and from your garage. Current Autopilot features require active driver supervision and do not make the vehicle autonomous," says the Tesla website.

This isn't the first time Tesla's self-driving vehicles have caused an uproar.

At the end of last year, a man was pulled over and found to be driving under the influence, and relying on his Tesla to safely transport him/ Musk was quick to denounce this, saying that isn't what the technology is designed to be used for.

In fact, there are even older examples of this.

This video, from 2016, is almost identical to the one which has just gone viral, and again shows what appears to be a Tesla driver snoozing behind the wheel. This video was also viewed with some skepticism.

The thing is, autopilot isn't actually that scary.

@SethWageWar @Tesla Autopilot is probably safer than human drivers, in which case this is nothing to freak out abou… https://t.co/ALpSD9S0Ub
— Morgan Donze (@Morgan Donze)1552072721.0

The technology is designed to make driving as safe as possible. It's just our human reactions that make it seem like some terrifying entity, possibly out of our fear of loss of control.

It's not what Tesla intends the autopilot to be used for - at least not yet. So our immediate reactions of fear and panic are (at least somewhat) justified for now.

But who knows what could happen in the future?

It seems like the autopilot technology is something Tesla is super interested in improving and expanding to the masses. In a few years, maybe we'll all be napping during the commute. But until then, let's try to stay awake.