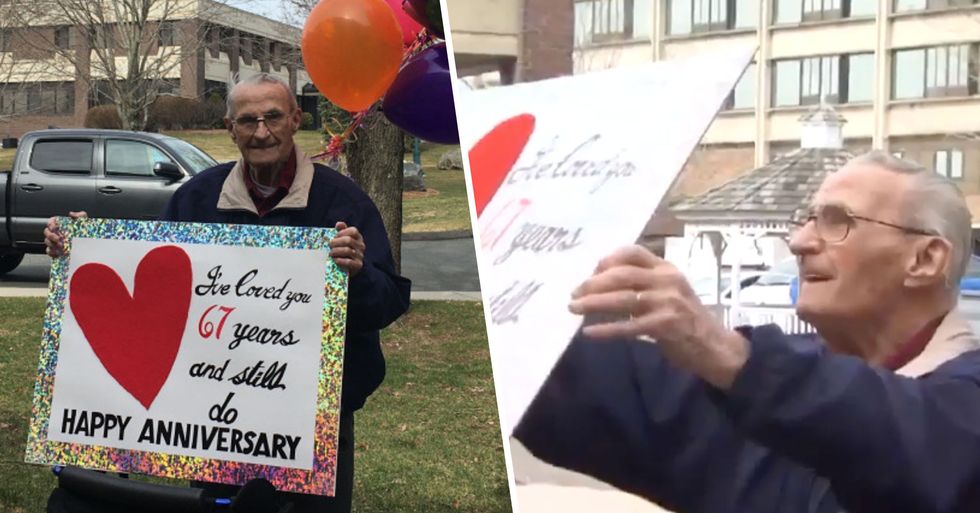 Elderly people are especially at risk - many looking staying in isolation for up to twelve weeks.

Well, one man, who was split up from his wife amid the outbreak, has been forced to celebrate their sixty-seventh anniversary in a different way...

183,852, to be precise. And, devastatingly, a staggering 7,182 more have been reported to have died from the illness.

Since the first COVID-19 patient in Washington, there have been over 4,000 more confirmed cases across the country and seventy-one deaths.

But there's another heartbreaking reality of this medical epidemic...

Many people in nursing homes are unable to have visitors, meaning they cannot see their loved ones.

And sadly, this was the case for Bob Shellard and his wife Nancy.

Bob isn't able to see Nancy as the Governor of New York, Andrew Cuomo. banned all nursing home visitors in a bid to prevent the spread of the virus.

And when the couple's 67th anniversary rolled around...

It didn't stop Bob going above and beyond to celebrate the special day with his wife - despite the pair being unable to spend the day together.

Bob turned up to the nursing home in Connecticut, US, with a homemade sign.

"I've loved your 67 years and still do. Happy anniversary," the sign read. Keep scrolling to watch the tear-jerking video for yourself.

He then held it up to his wife's window, along with some balloons.

In the clip, Nancy can then be seen waving and blowing kisses from her second-floor window.

This is the first anniversary Bob and Nancy have spent apart...

Speaking to NBC New York, Bob - who visited his wife every day before the ban came into action - said: "I wish I could be with her. It makes me feel bad because I want her down with me and I know she can't." "I wouldn't want anybody else. I don't think she could put up with anybody else besides me."

The couple have 4 kids together, who call them an "inspiration."

Their daughter Laura Mikolajczak explained to NBC: "It's just been an example for us, for all of us of kids." "So all four of us have really learned a lot from them and I can only hope that I have half as much as what they have shared over the years." "They have always been an inspiration to us and I think just seeing every year go by that they still express it in some way on their anniversary. There's just a sweetness to the two of them and what they share."

This is so wholesome! The virus has also been having a huge impact on the movie and TV industry. Keep scrolling to check out every film and TV show that has been canceled or delayed due to coronavirus… Is your fave on the list?