He “accidentally" uploaded his brain into a “VR server" and can’t come out. He's living in a different reality. | 22 Words 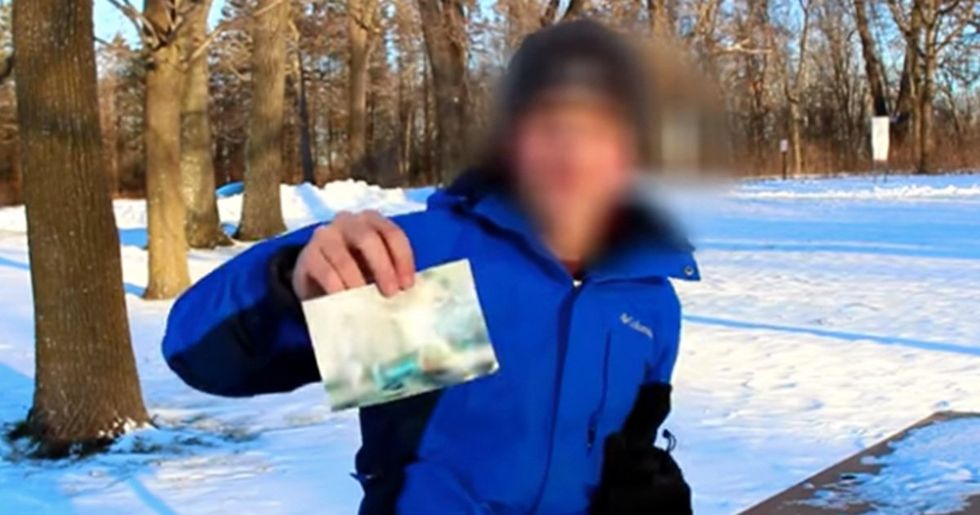 A man has gone viral on the internet after claiming that a photo he showed was taken in the year 6000. Not only that, but the unnamed man has a ton of other details about what life in the distant future looks like, and I must admit, it sounds awesome. But is it real? Can he be trusted? Our expert forensic scientists (AKA me and my internet skills) have done our research and have found our conclusion. But we'll lay the evidence out for you to decide.

Check out the info and the video down below of a man in snowy-middle-of-nowhere and decide for yourself if he's telling the truth or not. Because if he is, time travel might be coming to a Walmart near you sooner than you thought. Get your Christmas lists firing, because it won't be cheap, but it will be insanely cool.

Are you ready to dive into all the info the mystery man provided in the video? Because I am. Let's jump in.

Several people were chosen for the program, but he doesn't go into details about who they were. Are they military? Civilians? Scientists? No one knows, but honestly, the guy in the video looks and sounds like he is 19-years-old.

Time travel has already been invented.

Not everyone in the program traveled to the same year.

He doesn't give us any info on what years other time travelers went to, but he specifically went to the year 6000. Which seems rather arbitrary.

There are cures for everything! Including cancer that happened sometime in the 2000s. So that seems to be right around the corner! He, of course, couldn't give any details on what year or how, saying, "that's all I can say right now," but I believe him.

That was just a sidenote he threw in casually. I'm starting to sense some BS here.

Time travel is for everyone – but it will cost you.

So that's good news! Soon we'll all be able to destroy the economy with betting futures and stock market returns.

They have invisibility technology.

Which makes sense. If you're going to be traveling to the past, you need to stay hidden. He claims they make entire ships invisible so you can watch things like "the signing of the Declaration of Independence" from afar. Okay, but the Declaration was signed indoors. So, good luck? Maybe they have x-ray vision too.

We are no longer governed by people, but AI.

Why be governed by humans when we can all be beholden to a series of 0s and 1s. It makes perfect sense when you think about it. Stay with me on this point– we'll circle back.

This is because AI is smarter than humans and less emotional

Humans can't govern properly because we make our decisions based on emotions. We create laws based on how we feel. You know, using empathy, experience, and logic to make decisions. Is that so bad?

AI can predict things with 100% accuracy.

Can they predict that they'll eventually be overthrown by a scrappy group of humans fighting for a better life as every dystopian AI movie has taught me?

In the year 6000, humans are beginning to spread their consciousness across the universe.

Why would we want to EVER send stuff like this out there? This is for humans only, baby.

They also upload their brains to computers so they can live forever.

Oh, so like that terrible Johnny Depp movie that no one watched? If you're curious, keep scrolling to see the photo itself.

Is that even a picture? It looks like he ran it through the washing machine.

Here's the reason why it looks so bad.

Photos (and many other things) get distorted during time travel. No further explanation provided.

In fact, many things do, including limbs.

WHY DOES ANYONE SPEND MONEY ON TIME TRAVEL IF IT COULD DISTORT YOUR BODY?! I don't want to walk around the year 2028 looking like something out of a Cronenberg movie.

Time travel was first tested on dogs and cats.

Not rats, not chimps, not simple objects. Our little furry friends did the hard work. I bet this didn't ever go horribly wrong.

2028 is when time travel goes commercial.

Spoilers from earlier. The government is going to release all this tech to us in 10 years. So start saving up. Or maybe put time travel on your Christmas list this year.

But I thought you just said AI was the government. How have they not taken over humans if they literally govern over them?

Humans and computers are in the process of merging into one.

This ties into the whole uploaded consciousness thing. Humans in the year 6000 can effectively live forever this way.

He tells the story of losing his best friend who’s stuck in the utopia of the year 6000 and fake cries the whole time.

I feel for him. Especially because he doesn't name his friend, or give any real details about their relationship.

He “accidentally" uploaded his brain into a “VR server" and can’t come out. He's living in a different reality.

It's a classic story, really. Happens to everyone at least once. Honestly, if his friend really did upload his consciousness into a utopia VR reality, I would be pretty happy for him. This world sucks.

You can avoid death by becoming a computer person.

Because who needs arms, legs, lungs, sex, laughter, or any of the other things that make us human? We can be computers!

That's right. Since no one really dies anymore due to cure for diseases and the computer uploading, there was a bit of a real estate problem, solved by shrinking everyone into tiny little people. It is a weird thing to mention off hand at the end of the video, but okay.

Brains can get uploaded, so no one cares about their bodies.

This one kind of tracks. If death doesn't matter, why even go to the gym or eat kale? There's no point.

Computers are the size of atoms.

This is physically impossible. Does he know what an atom is? Thank you, next!

I thought he had invisibility technology? Why does he have to hide in the middle of nowhere?

He says goodbye and shakes hands with no one.

One of the funnier moments in the video. He first shakes with his right hand and then shakes hands with someone else with his left. That's the future of handshakes right there.

Here is the video so you can see for yourself.

It's worth a watch because of how funny it is.

So what did you think?

I'm leaning on this being UNTRUE.