Man Who Created the Momo Doll Has Destroyed It | 22 Words 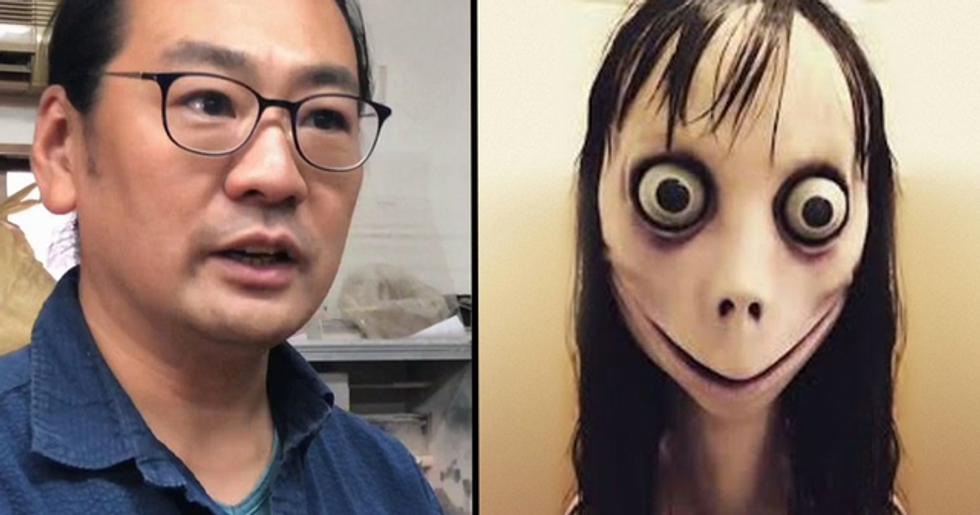 Man Who Created the Momo Doll Has Destroyed It

When it comes to children on the internet, parents have a right to be a little bit cautious. But that caution went into overdrive last week, as the whole world seemingly went mad over a creepy doll and an online "game."

Worried parents shared stories of the Japanese Momo doll being used as a part of internet challenge, encouraging young, impressionable kids to harm themselves or others. Many sources claimed the doll was appearing in online content intended for children, such as Peppa Pig videos on YouTube.

The internet is a pretty amazing place, but can also be terrifying as Momo has proved.

The fact the we all essentially have the entire knowledge of the world at our fingertips at all times is a pretty incredible thing.

But with so much ease of access comes some issues.

Because kids can find anything online, they can run the risk of stumbling across things that they'd be far better not seeing. It's only natural that parents can want to be protective over their children.

But sometimes, this can tip over into overprotective territory, coining the term "helicopter parents"

This term refers to mums and dads who can't leave their kids alone, and end up hovering over them and monitoring all they do. While it can feel like the only way to keep a kid safe, it can also cause them huge problems.

For protective parents, the internet represents many unknown dangers.

The amount of content which can be discovered online, alongside the assumption that most people in the world don't have a child's best interests at heart, can be a constant source of anxiety for parents.

Parents can want to just prevent their children finding anything they shouldn't.

But this type of censorship can feel more and more impossible, as kids become more tech-savvy and parents experience a loss of control.

One perfect example of this is the recent Momo story.

The way this issue quickly went viral online shows how out of control parents are feeling when it comes to the content their children are absorbing.

Stories of what was actually happening varied.

But they all centered around this (undeniably creepy-looking) doll. The bug-eyes female face was said to be a part of an online "game" or "challenge" designed to make kids hurt themselves and others.

In spite of the vague nature of the story, it quickly gained traction.

Parents were terrified of the unknown evil that may be effecting their precious children. The story went viral, with tons of parents sharing warning about the dangers of Momo.

Even celebs got in on the action.

Singer Kehlani urged parents to be cognisant of the dangers of this internet trend, linking to a now-deleted thread about the Momo challenge.

But the Momo hysteria was revealed to be totally unfounded.

Like eating Tide pods and snorting condoms, the Momo challenge is a viral hoax. Spreading these stories distracts f… https://t.co/tFCCnzHI4e
— The Atlantic (@The Atlantic)1551407744.0

The Atlantic broke the story that there was no real substance behind the Momo fears. In fact, the story stood as an exemplary tale of what happens when people become emotionally overwrought and caught up in the drama without properly knowing what is going on.

We want to clear something up regarding the Momo Challenge: We’ve seen no recent evidence of videos promoting the M… https://t.co/PL4gT4HC46
— YouTube (@YouTube)1551291151.0

The platform revealed that in spite of mass hysteria on the subject, there was no evidence of any Momo-related content on their site, and that kids were safe.

The story quickly became a source of laughs.

The way a story spun out of what seems to be no real evidence managed to whip the entire world up into a frenzy is pretty funny.

Some thought we were judging the doll based on appearances.

The trolls seemed to choose a face that the entire world would find frightening, then prey on our basest fears about children and the world of the internet.

Others pointed out the inherent humor of the name.

"Momo" is better known for referring to a type of Japanese dumpling. Now that's a viral challenge we could get on board with!

There is a more problematic side to the Momo story, though.

Parents seem to be pushing their anxieties onto these faraway, abstract concepts with no substance to them. Instead, perhaps we should focus on the very real dangers the kids of today are facing?

In spite of the lack of real danger, many wanted to take a stand against Momo.

In the Philippines, a large group of authority figures came together to burn an effigy of the scary doll, hoping to alleviate their fears about what it represented.

And it seems the original artist was inspired.

The Japanese sculptor responsible for the Momo doll (although not the Momo "challenge) has decided the best course of action is to get rid of his creation.

The doll was originally created as part of an exhibition.

The piece is titled "Mother Bird," and is based on a Japanese legend. It was part of a wider collection of pieces inspired by ghost stories, but was in no way supposed to become part of a viral hoax.

The artist's association with the online hysteria happened quite by accident.

It was a set of online trolls who originally discovered the scary sculpture and created the online urban legend which became so famous.

The sculptor's name is Keisuke Aiso.

His Momo sculpture, which has come to define him, was only a small part of his long career. It's clear Aiso has come to resent the doll.

Aiso claims the sculpture is no more.

Speaking to The Sun, he says, "It doesn’t exist anymore, it was never meant to last. It was rotten and I threw it away."

The artist hopes the destruction will alleviate any lingering fears.

"The children can be reassured Momo is dead - she doesn’t exist and the curse is gone." he has promised.

He's saddened by what his creation has been turned into.

"It was never meant to be used to make children harm themselves or cause any physical harm." he has said. "I have no regrets that it is gone."

He has mixed feelings about his newfound fame. "I guess I have to be grateful in that sense. I created this artwork three years ago and at the time when it was exhibited at the gallery it did not receive much attention, so at the time I was very disappointed. So when Momo first appeared, it was good in a way that it had received some attention. I was pleased. But the way that it has been used now is very unfortunate."

He says the model is intended to frighten - though not in the way it is now known for.

He goes on to say, “When I created the piece - I will be honest - I had every intention to scare people. It is a monster, that’s what I do I make scary things, either using make-up or models. It is a ghoul, about the death of a woman in childbirth, in a way its reason for being is to scare children but it wasn’t supposed to be used in the way it has."

Momo is really just a symptom of a far bigger internet problem.

If it hadn't been this scary doll, parents would have been equally hysterical over something else. The real fear, though, is losing control of our kids.

There's no denying that at first glance, the Momo doll is frightening.

The large bulging eyes, stringy hair, haunting expression and bird-like claws make it perfect fodder for nightmares. But what's far scarier is the unknown that the internet represents.

As technology advances, kids have unprecedented access to the world.

And this includes all the creepiness, weirdness, explicitness and cruelty that the internet represents. We're in uncharted territory, and it can feel totally impossible to offer protections to children.

Underneath the Momo hoax lies a bigger issue.

And it's not one that can be easily solved by simply destroying a doll. The true enemy is the unknown - and that's much harder to fight against.

There's no denying that keeping your children safe in the internet age can be a minefield. But one lesson we've learned is that becoming hysterical over unfounded hoaxes doesn't help anyone out.