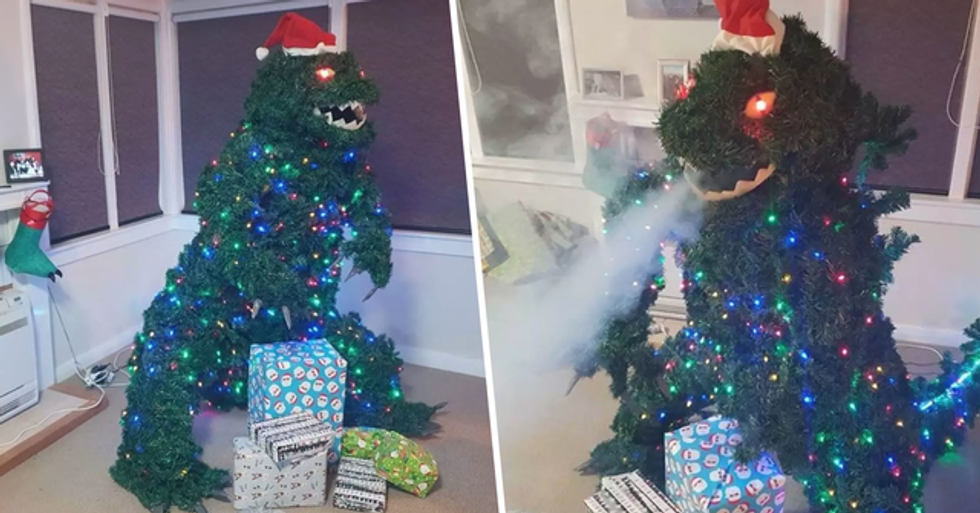 What comes to mind when you think of Christmas? Santa Claus? Presents? Fictional fire-breathing beasts?

Okay, it's probably not that last one... So this story may come as a little shock for you, because a man has created a man-size, smoke-breathing Godzilla Christmas tree, and it is all the festive fun we didn't know we needed.

Keep scrolling for the full story, and to see Treezilla in all her glory...

But there are some people who go the extra mile...

And, instead of splurging on expensive decorations, some people decide to turn their Christmas trees into giant monsters.

Steven Newland, from New Zealand, has made headlines after he auctioned off his Christmas tree... Which also happened to be a man-sized, slightly greener version of the fictional beast, Godzilla.

The thirty-six-year-old floatplane pilot from Rotorua, New Zealand, puts a tremendous amount of effort into the festive tradition every year.

He is incredibly inventive...

He always goes the extra mile to add a bit of fun into the staple Christmas decoration... Take this miniature airplane Christmas tree, for example.

He even made a Pac-Man tree one year...

Is there anything Christmassy that this man can't do?!

But last year, Steven decided to take inspiration from his nephew...

Who happens to love dinosaurs.

So what do you get if you mix a Christmas tree and a dinosaur?

You get the Treezilla, a hybrid that we never thought would grace our earth. “I got the idea from my 4-year-old nephew who loves dinosaurs," Steven told Bored Panda. “I thought I could do a dinosaur tree, but why stop there?  If it could also breathe smoke, it would make it amazing!"

Treezilla started its life as a simple pile of Christmas supplies...

Well, 4 fake Christmas trees, 10 meters of chicken wire, some weedmat, a fog machine, and plastic teeth and paper claws, to be precise.

Here we have a prepubescent Treezilla before he developed his green fur. How cute.

Treezilla started to take its shape, and it's 1.8-meter-high height.

Or chopped up plastic tree, whatever you'd like to call it.

Treezilla needed a stand to prop her up... But this wasn't anything a couple of presents couldn't disguise.

Only the head, rows of teeth, and smoke-breathing mouth to go!

But it isn't a real Christmas tree without fairy lights and presents, is it?

Here we have a completed, fully-grown Treezilla, in all her glory.

She breathes smoke like the real Godzilla! It's a Christmas miracle! Describing his invention, Steven wrote, "The fog machine works with a remote-control and comes with spare fog machine fluid. Lights can easily be removed, and the Christmas hat is not needed if you want to use the tree for something else."

Treezilla was auctioned off this year...

For a handsome $415 NZ (USD $273). And, heartwarmingly so, Steven donated all the money to the children's charity, Canteen. But what we all want to know is... What's in store for 2019's tree?! Speaking about any future projects he has planned, Steven said, "This year's tree is still under wraps (excuse the pun). I can tell you that it involves 5 meters of chain, a beer crate, and I had to buy a ceiling fan." This sounds far too exciting. For more Christmas tree content, keep scrolling to hear about trees made out of wine bottles...