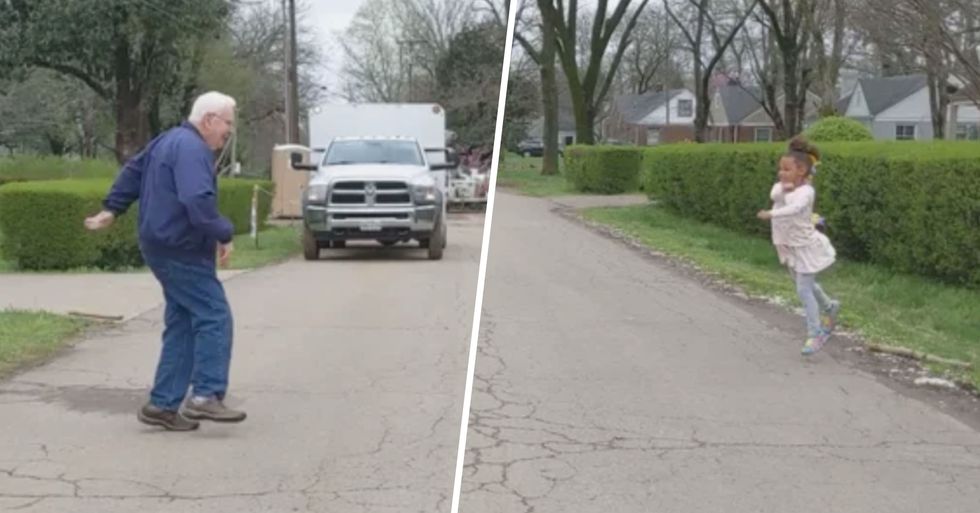 Millions of people around the world are currently practicing social distancing in a desperate bid to slow down the spread of COVID-19.

Of course, it is extremely difficult to be kept away from loved ones, but one man has figured out a way to spend time with his granddaughter in the best possible way.

Here in America, we are practicing the art of "social distancing."

These social distancing measures have been imposed to prevent the further spread of COVID-19.

Because, in case you haven't heard, we are currently in the midst of a global pandemic.

COVID-19 has been spreading across the globe at an alarming rate...

We can hopefully delay and prevent catching and spreading the potentially deadly virus.

Over the weekend, President Trump announced that the federal guidelines on social distancing have been extended for at least another thirty days.

People are already losing their minds having been cooped up in the house for days on end, so this news has come to the dismay of many.

The elderly are at the highest risk of contracting the virus...

Meaning that visits from family members is a strict no.

This is, of course, heartbreaking for many grandchildren around the world...

But one grandad recently came up with the best idea that allows him to still spend time with his granddaughter.

This is Sherrie Neely and her 6-year-old daughter, Kira...

And they have both been self-isolating away from Sherrie's dad, Marvin at their home in Tennessee.

So Marvin came up with the perfect solution in these difficult times.

Marvin and Kira decided to meet across the street...

And bust out some dance moves together to their favorite song, "ABC" by The Jackson 5 ... all whilst standing well apart from one another.

Sherrie shared an adorable video of the pair onto Facebook...

"I haven't posted on FB in forever...but I love this video so much! This is the street that separates my house from my parent's house, and is typically crossed multiple times throughout the day," she wrote. "Kira loves her 'Papa' so much and they've now started daily 'dance-offs' since the virus is keeping them separated."

Marvin has been dancing especially for his granddaughter...

"My Dad is turning 81 years old next month and I've never seen him dance, but he's really putting forth great effort and has some special moves!!!! I'm sure the workers think we're crazy!!" she went on to say.

Since Sherrie shared the video...

And remember that there are always ways to stay in touch and connected with your loved ones. Keep scrolling to learn about how the pollution in New York City has significantly dropped since people have been self-isolating...