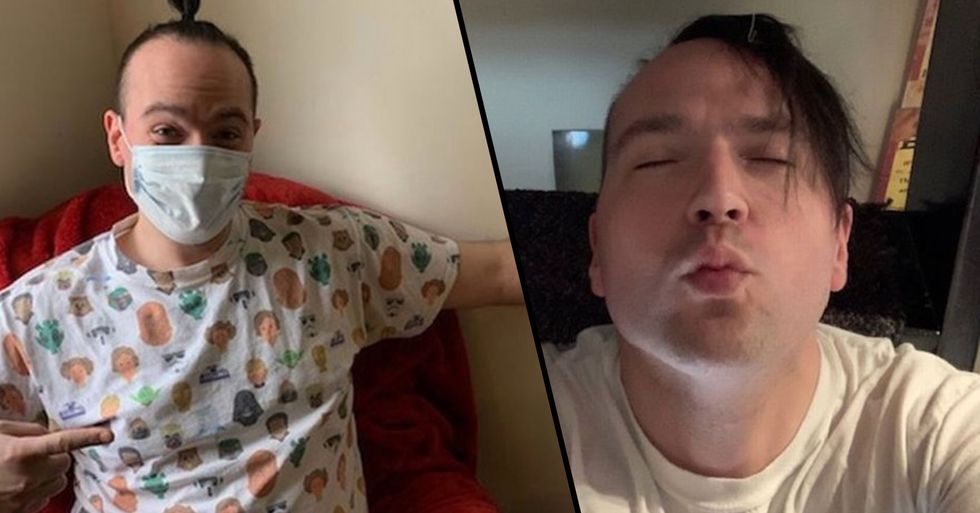 Man 'Dating Ghost' Fears She's Cheating on Him During Lockdown

Don't believe in ghosts? Well, it's time to keep reading!

A man who has been in a relationship with a ghost girlfriend has opened up about his worries over her cheating on him during the lockdown...

There are many people out there who believe in the paranormal world...

But one man perhaps believes in it a little bit too much.

This is Gary DeNoia.

He's a thirty-five-year-old man from New Jersey who claims he has been in a committed relationship with a ghost named Lisa.

Gary has been seeing Lisa, who is a paranormal spirit, for the past 2 years.

This man genuinely believes that he has a ghost girlfriend...

And it is highly unlikely that he is doing this for attention or publicity.

He has exposed some raunchy details about his intimate life with her in the past...

After previously telling us that he has not taken her to meet his parents as of yet, we thought that Gary might be feeling a little hesitant about their relationship.

“I’ll visit my parents over the holidays, but Lisa will stay at home. I’m not ready to introduce her to my parents yet. She understands, but it certainly has put a strain on our relationship. She wants to meet my parents..."

He then went on to say this...

“I just have a feeling they won't respond well to it if I do. Hopefully, in the new year I'll be able to feel comfortable enough to take that step. I am starting to introduce her to more and more of my friends, which has had mixed results."

It has clearly been difficult for him...

“Most people are initially confused, or they think I am joking. But once they see how happy she makes me they're totally cool with it."

He then went on to discuss his intimate life with Lisa...

He described his experiences with her as "amazing." “Our [private] life is ever-evolving. It gets better and better. There’s always new sensations. Different vibrations, which I guess is the best way to describe it.

He went even deeper...

“It’s like your whole body is having s*x. And since Lisa is a spirit, she is more flexible which allows us to experiment with all sorts of new positions."

And after Christmas, it was only normal that they started discussing their Valentine's Day plans...

And they're far from the usual.

He told the Daily Star Online this...

They plan on starting the night off with a nice Netflix and chill before opening up their relationship to another person.

“We both think that going out on Valentine’s Day is overpriced and overrated. We have a tradition. The night we make popcorn and ice cream sundaes."

He then went on to elaborate...

“Then we watch our favorite movie, which ironically is Ghost. I know… we’re so corny. We can’t help it. Afterward, we make love on a bed of roses. The roses stay on the bed when we go to sleep, so we wake up to the smell of flowers."

And here's when it gets a little bit weird...

"Lisa has recently befriended a female spirit and I thought it would be fun to bring her over and spice things up."

And they were super excited about it.

"I’ve never had one before. Not even with two living women. I’m a little nervous, so needless to say there will be a lot of wine involved to loosen me up."

They described it as "hitting a new milestone."

But you'll all be glad to read that Gary and Lisa are still together... but there have been a few bumps in the road since the global pandemic struck earlier this year.

He has been living in one of the hotspots for the pandemic...

Speaking to the Daily Star about the last few months, he said: "At first, we spent every day together for a month. Jersey City was an epicenter early on during this, especially where we live. And I’m by nature a very anxious person. On top of not being able to see my family or nieces, I was feeling very afraid."

"She’d help me cook and fold laundry. Watch loads of TV. And obviously have s*x. All the time. It was fun, but exhausting," he explained. "I’m not in great shape, so it was hard to keep up. Being on strict lockdown we had to find creative ways to be [intimately] adventurous."

But their fiery intimate life wasn't to last...

According to Gary, his ghostly other half has been breaking down the lockdown rules. "This past month she’s out all the time. Never tells me where she’s going. Just says she’s going ‘out with friends.' She could be anywhere with anyone. And I’ve always felt secure in our relationship, but lately, we haven’t been having much [intimacy]."

He's worried that she's cheating on him.

"I mean I’m not crazy, am I? It just doesn’t make any sense. I can understand wanting space, but something just feels off."

Gary has put his insecurities and paranoia down to cabin fever...

Which a lot of us can relate to right now.

Each to their own, right?

We wish Gary and Lisa the best of luck with their relationship! Make sure to keep scrolling to read about the woman who married a ghost pirate... and then divorced him...