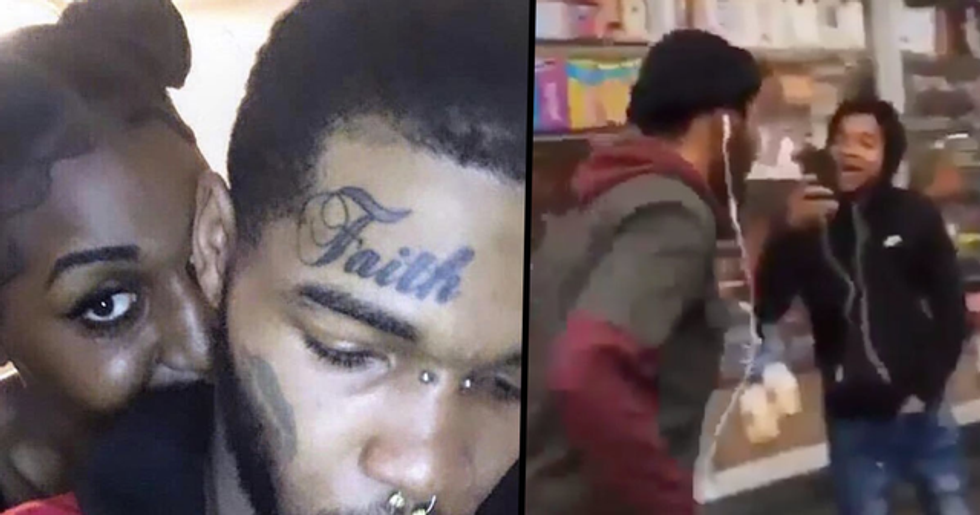 In some truly tragic news, a man from Philadelphia, Pennsylvania, has taken his own life this week. Reese Willoughby was in love with, and dating, a trans woman named Faith and was open about his relationship online. But, because people are trash, Reese was immediately subjected to a lot of online abuse for his open-mindedness - he was even verbally harassed in the street.

Unable to withstand the societal pressure and horrific bullying, Reese ended up taking his own life to escape the hatred. The internet has come out in support of both Reese and his girlfriend, Faith - but it seems like we have a long way to go in terms of understanding and respect.

Falling in love is truly a magical thing.

In the past, relationships were far more set in stone than they are today. But if you thought that the world was accepting, this story proves that we have a long way to go.

But, sometimes, a story will remind us that, even though we put up the facade of acceptance, violence against those who are different still runs rife in many communities.

It involves one heartbreakingly young, twenty-year-old man, for whom the prejudices, hatred, and violence of the world became too much to deal with.

This is Reese Willoughby with girlfriend, Faith.

Faith is a black trans-woman - arguably the most marginalized group in society. But Reese loved her anyway, and proudly showed off his girlfriend in a now-deleted Facebook live.

Reese was proud of his relationship...

No matter how controversial some people saw it to be, he bravely told the world about his feelings and even shared adorable images of the couple. Reese also had Faith's name tattooed on his forehead.

But not everyone was so loving.

In fact, after opening up about his relationship, Reese faced a lot of abuse, both online and off. Some of the horrific bullying was even recorded and posted.

And the amount of abuse that Reese faced became too much.

It was reported this week that, following the bullying, taunting, and threats, Reese couldn't take things any longer, and tragically ended his own life.

These sorts of tragedies are nothing new in the trans community.

In fact, black trans women have some of the lowest life expectancies on Earth. The cause of their deaths are almost always violence - typically by men.

There's speculation as to why this is.

Many believe that the reason that heterosexual men feel the need to attack trans women is the fear and shame that they feel about being attracted to them. They mistakenly believe that, by ending the woman's life, they eliminate their attraction to her. This type of attack happens all the time and is truly horrific and shameful.

And many believe that Reese's death is adjacent to this phenomenon.

The men who bullied, threatened, and taunted Reese didn't actually hate him - more so, they were afraid that they too could feel the way that he did for a trans woman, something that is, in their minds, unacceptable.

The video shows just one incident of many.

My heart breaks for Reese, for his girlfriend, and their loved ones. These men screaming at him are beyond fragile,… https://t.co/IqKTq9AdpZ
— Janet Mock (@Janet Mock)1566350062.0

"He was getting picked on and joked on all the time. Where we are from, if you like [a] trans woman and you [are] black, the streets will talk about you, fight you, even try to kill you. He was dealing with a lot," a source close to Reese revealed.

The fact that Reese wasn't ashamed of his relationship was incredible.

But, unfortunately, it's ultimately the reason that he took his own life, too. The pernicious stigmas surrounding dating trans women need to end before more lives are ruined.

And while it's unlikely that the bullying was Reese's only issue...

My condolences to Marcus "Reese" Willoughby of Philadelphia,PA. It is reported he committed suicide for being bulli… https://t.co/PjT7k2SHo9
— TS Candii (@TS Candii)1566307037.0

It's clear that the harassment that he was facing was the final straw. Many have taken to Twitter to offer condolences and remark on Reese's bravery.

In some ways, cis men who date trans women put themselves in the danger that trans women face every day.

Cisgendered men are being bullied, and in some cases committing suicide, because they love Trans women. The world n… https://t.co/MVmcQAsVda
— Steven Canals (@Steven Canals)1566354303.0

Which makes it even harder for trans women to find love. Alongside the social stigma, the men that they choose to date may also face some very real threats and harassment.

While this is clearly a tragedy for Reese, it goes deeper.

The victims of this story could be extended to all black trans women - as if life wasn't hard enough for this brave group already.

Many have offered words of condolence.

But among the most famous was model, activist, and all-around superstar, Munroe Bergdorf. Herself a trans woman of color, she took to Instagram to share a heartbreaking tribute.

She wrote a lengthy caption about the issues faced by the trans community.

"Needed to take a minute and gather myself before speaking about this story at length. Firstly I'm heartbroken, for Faith, Reese and their loved ones. I'm heartbroken for the black community, the trans community and ultimately humanity."

For Bergdorf, this story represents a wider social issue.

"Almost consistently since this year began, stories of black transgender women being attacked and murdered by cisgender men have been reported with such little urgency or concern for the fact that this situation is critical. Imagine if it were cisgender white women being hunted down and shot to death in parking lots, fished out of lakes, or found stabbed in hotel rooms, purely for the fact that they were cisgender and white. IMAGINE THE UPROAR, the public outcry. But a white woman's life will always be held with greater esteem in a society where whiteness reigns supreme."

She's also been open about her relationship on her social media.

"Black transgender lives are held with such little regard by wider society that our deaths are expected, our deaths are a statistic, our deaths seemingly do not matter. And that weighs so heavily on me and my sisters every single day. Now, Reese, a black cisgender male has taken his own life after being bullied by other black cisgender men for coming out as in a relationship with Faith, a black transgender woman on social media... But before you state your disgust at those men who pushed Reese to take his own life. Ask yourself, what would YOU feel if you found out your father, your brother, your ex, your lover or your son brought home a black transgender woman. Are you still down for black trans lives then when we're stitting opposite you at the dining room table next him?"

She also encouraged us all to do better.

"Every single day just seems to get darker and darker and every single time it gets worse for trans folk and queer folk in general, it falls on the shoulders of black trans women, the most the most marginalized members of the LGBT community to not only lift ourselves up, but also to educate others as to why our lives matter. Honestly, I'm tired of it. It feels like a large portion of the queer community got their rights and jumped ship and the rest of us are clambering for the life rafts. RIP Reese. Thinking of you Faith." Our hearts are with everyone affected by this tragedy - and we can only hope that it helps inspire much-needed social change.