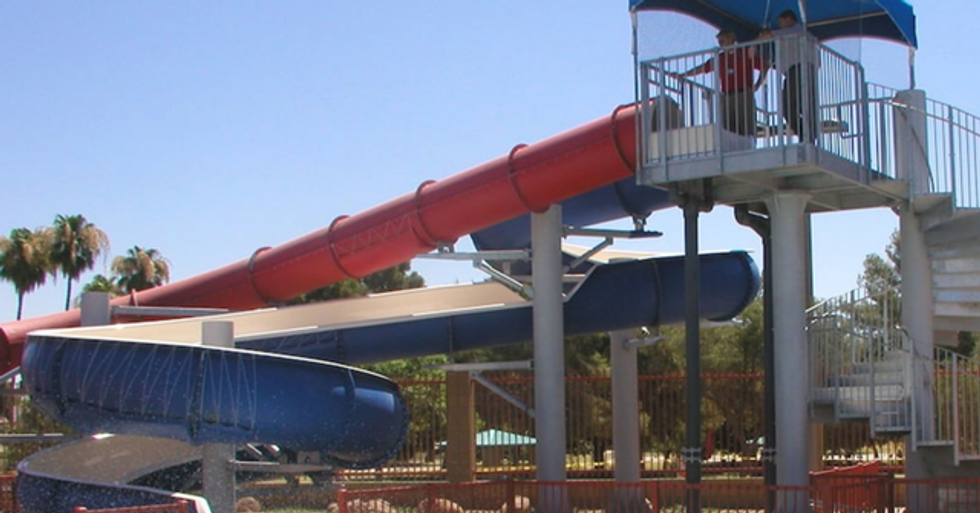 Man Dies After Getting Stuck in Water Park Support Pipe

22 Words Staff
And the swimming center will remain closed until further notice.

The news has come in today that a man has died in a freak accident at an Arizona swimming center.

The full story is as follows...

Arizona is in shock.

Just after midnight on Monday, August 17th, a man was discovered stuck inside a waterslide at the popular Scottsdale swimming center, Eldorado Aquatic & Fitness Center.

Initially, a passing police officer could hear a man crying for help...

But he couldn't quite work out where the muffled calls were coming from, AZ Family reported.

It took the officer a while to figure out where the sound was coming from...

But, at around 1 am, it dawned on him that the man was actually stuck up inside one of the slides.

The officer called for backup...

And, for the next 2 hours, rescuers and a medical team worked tirelessly at releasing the man.

5 officials were seen draining the back pool area - pictured below - in the early hours on Monday...

Some of which confirmed that the man was stuck about 4 feet down.

Sadly, their rescue mission had turned into a recovery mission.

The team continued to work until around 7 am when they were finally able to free the man.

Tragically, it was too late.

The man, who has only been identified as a thirty-two-year-old, was pronounced dead at the scene.

But, ever since the news of his death broke, there has been a hum of confusion in the air...

How on earth does someone get stuck in a water slide?

Anyone who has simply seen a water slide will know how spacious they are inside the tunnels...

So how could someone find themselves trapped?

Well, it turns out that the man wasn't actually in the slide.

It is believed that the unfortunate man had broken into the center by climbing over the fencing.

Further details as to why he had broken into the facility remain unclear...

But many are assuming that he was either homeless or on the run from the law.

Officer Kevin Watts, one of the police officers at the scene, was baffled as to how the man had managed to scale the fence, climb up onto a slide, and get inside the support pipe.

The whole situation is incredibly bizarre.

But it is widely believed that the man wound up being stuck as a result of trying to hide from a passerby.

It is a truly horrifying way to die...

And now, photos of the pipe in which he had wound up stuck inside of have emerged.

The narrow tube can be seen below...

Being slowly lifted from the center of the slide by a crane.

After being dismantled, it was then laid out on the ground.

The Maricopa County Medical Examiner will determine exactly how the man died...

Though it is widely assumed that he suffocated.

The incident is now under a full investigation...

And the swimming center will remain closed until further notice.

Sadly, this isn't the first time someone has died at an attraction.

Keep scrolling to read about the theme park whose malfunctioning rollercoaster killed 2 guests...