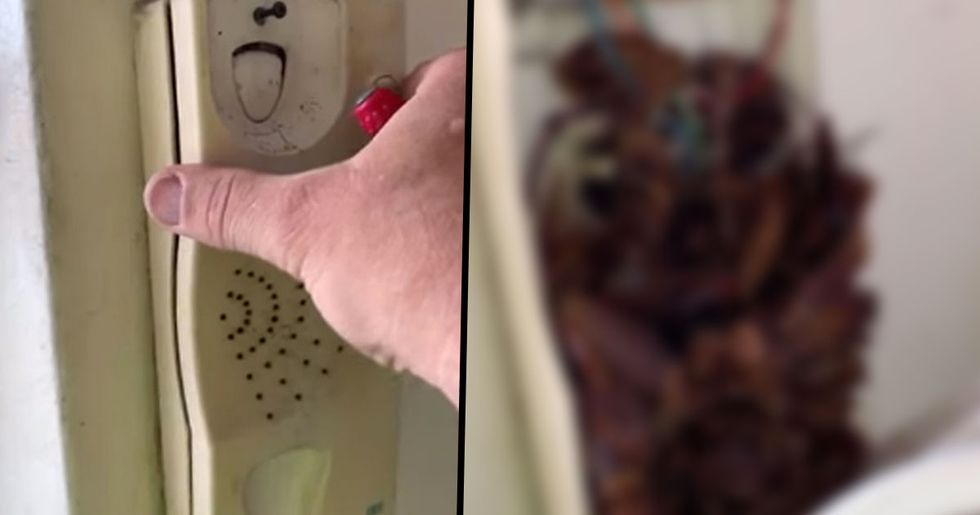 Is there nowhere these little buggers won't go?

If you've ever stayed in the wrong place, you'll know that cockroaches are champion explorers, but surely there must be some places they can't reach.

Less so for one man in Sydney, Australia, who pulled back the casing of the landline phone to find a host of dead roaches all clumped in there together.

Pretty bad real estate sign when you're looking round a house...

Cockroaches, aside from gartering a reputation as disgusting, germ-laden vermin, are actually quite impressive creatures. In this article we'll take a look how the roaches have got to be so hardy.

It started with a man from Sydney, Australia, inspecting a house.

Then the unnamed man came across something unexpected?

Here's the video of what he found.

It's little wonder the video went viral.  It's hard to watch it and not begin to distrust your own everyday appliances.

Secondly... What were they doing there?

Whatever drew them into that phone clearly killed them. So what was it?

This isn't the only appliance frequented by roaches, here are some more household places where they like to spend time.

Roaches are known to be attracted to fridges, they like the warmth and damp at the back.

Best not to think too much about that one.

Must be why they scurry so fast and get up so early.

Roach Margarita anyone?  With one of the little umbrellas? Yes sir.

Best not think too much about that one either.

So how can cockroaches deal with such hardy dwellings? It's thanks to an array of superpowers. Disgusting as they might be, roaches don't mess about.

Roaches have a gizzard, which means they have internal teeth, which allows them to digest almost anything.

Cockroaches naturally emit an oil-based substance which cleans the filth off them.

Cockroaches can hold their breath for an average of 40 minutes, which makes them very difficult to drown.

There's a lot of them

There are over 3,500 species of roaches in the world today.

They go back a long way.

Cockroaches go back 200 million years, making them older than some dinosaurs.

So how do we get rid of them?

There are a number of ways to deal with a cockroach invasion, many of which are simple and obvious measures to take.

Make sure there's no leaks.

Cockroaches are attracted to moisture so leaky pipes could be making the situation much worse than it needs to be.

Cockroaches can fit themselves through even the narrowest gaps.  So be sure to seal up cracks in countertops and baseboards.  You can use caulk and a caulking gun.

If it hasn't already occurred to you, clean up. Roaches eat food residue, so make sure they go hungry.

The hotter it is, the more active the invaders will be. So make sure to turn up the air con.

A good trap for killing cockroaches is two parts boric acid, one part sugar. The sugar attracts them, the acid kills them.

Last but not least, call the experts.

Let's face it, pest control know what they're doing. If your problem gets really bad, they may be your best bet.

Though they're not all bad...

Cockroaches, actually have medicinal qualities.  One cockroach farm (I know...) in Xichang, China, uses them to create a medicine for stomach aches.

One drug called Kangfuxin, made from liquidised cockroach powder, has been shown to relieve chronic gastric conditions.

Yeah, it sounds disgusting. But studies have shown that it's a dense source of calories and nutrients. Some scientists are saying it could be the next superfood.

Let's not fear the roaches.

Yes they are disgusting. And yes, they have a habit of finding their way into the most unwelcoming of crannies. But roaches aren't too difficult to get rid of. And, as it turns out, could reap all sorts of rewards for mankind.