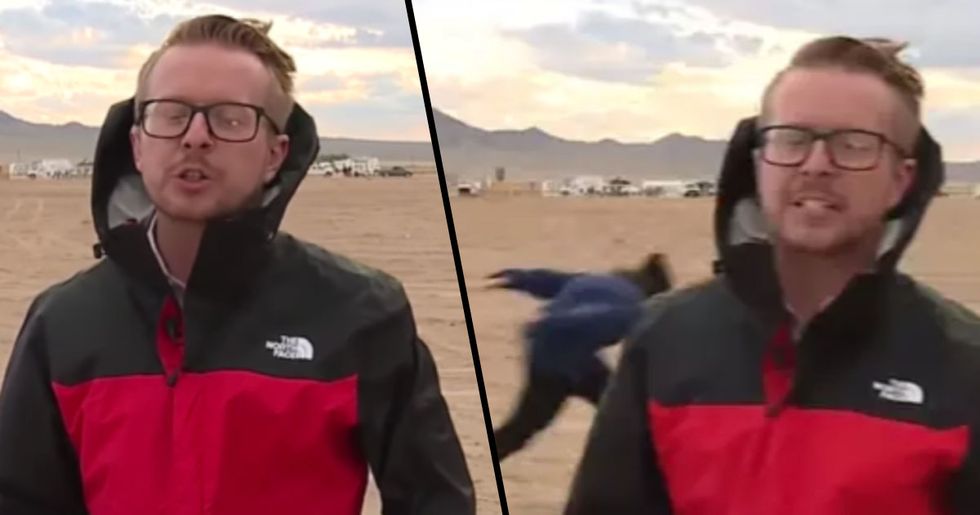 The popularity of the notoriously secretive Area 51 military compound has peaked in the last couple of months after the "Let's storm Area 51" Facebook group got way out of hand, with millions of people signing up to the pledge to "see them aliens."

And now, the day we've all been waiting for has finally arrived.

It is estimated that around 30,000 avid alien hunters are going to arrive at the compound today, and the news stations have pitched up in preparation for some high-quality alien content. But, as a KTNV reporter, Joe Bartels, was signing off his segment, one man expertly Naruto ran through the shot. Amazing.

Keep scrolling to see the hilarious video, and to hear a little bit more about the Area 51 frenzy that has engulfed the internet.

Area 51 has, for years now, been an alien-enthusiast hot spot.

And what exactly goes on inside the compound has lead to decades of wild speculation from UFO fans all across the world.

And now, more people are attempting to access the facility than ever before.

And one person took things to a whole new level...

Clearly bored of discussing alien conspiracy theories over the internet in their basement, one extraterrestrial enthusiast formulated an actual, real-life plan to find out the truth once and for all.

It all started back in June with a simple Facebook group.

At the end of his post in the Facebook group, Matty wrote: "P.S. Hello US government, this is a joke, and I do not actually intend to go ahead with this plan. I just thought it would be funny and get me some thumbsy uppies on the internet. I'm not responsible if people decide to actually storm area 51."

This is not a joke to some, and people are actually planning on going ahead with the alien hunt!

Though whether all of them will turn up has remained a mystery...

Because today's the day, folks! September 20th is upon us, and we will now see whether all of the alien hunters will actually turn up or not.

There's going to be a festival...

In early September, the group's creator, Matty Roberts, disassociated himself from the event that is today descending upon Nevada, saying that it was poorly organized and that he was afraid that it may turn into a public safety crisis. Instead, he organized a 3-day-festival, dubbed "Alienstock" in the neighboring town of Rachel, and encouraged people to attend this rather than storm the facility. The festival will see thousands of alien hunters revel in live music, alien-themed activities, and plenty of booze.

Though the festival is predicted to be a roaring success...

It still hasn't stopped people from turning up to the military compound.

Some people are just too damn keen on seeing those aliens.

And people have flown in from all over the world to attend the raid. You have to admire their dedication, at least.

The press has descended upon the area.

And so have the first wave of Naruto runners, apparently.

Naruto Uzumaki is the eponymous protagonist of Naruto, a Japanese manga and anime series. He is a ninja, and he has an odd and distinctive running style... Arms pointed back, chest pointed forward.

Naruto running has become the main joke of the full Area 51 fiasco...

"If we Naruto run fast enough we can dodge the bullets," as the original group so famously stated.

And our first keen Naruto runner has now been spotted!

Joe Bartels was reporting live from Rachel to cover the final preparations for Alienstock, where he covered general updates on the 3-day festival.

And it was caught beautifully on live TV.

It is truly an excellent piece of television. You're welcome. Now, let's go see them aliens!