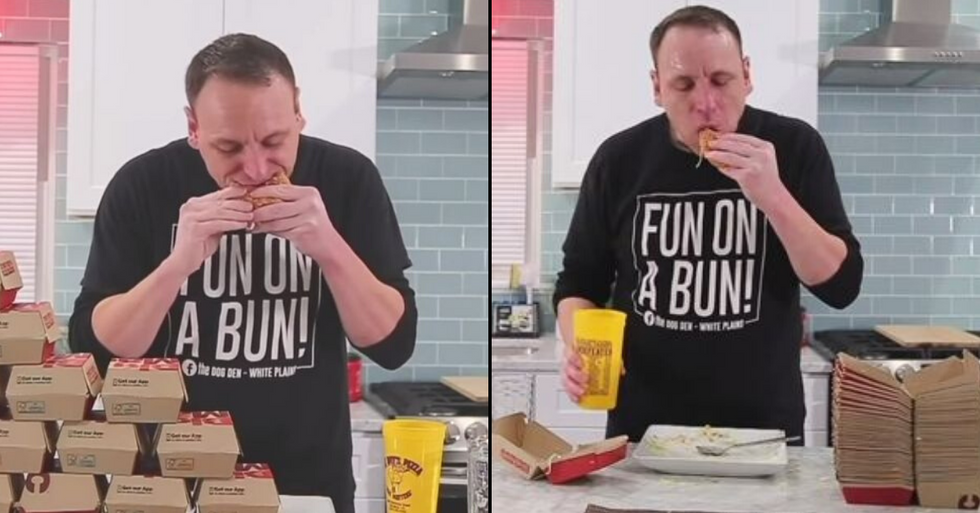 Everyone loves a takeaway now and then.

Whether your favorite is a McDonald's, Taco Bell or Chipotle.

But how much of it could you eat in just one sitting? Perhaps some McDonald's fries and a cheeseburger, or more?

Well, one man challenged himself to eat 32 McDonald's Big Macs in one sitting, and he now claims to have broken the world record.

Keep reading to find out more...

How many burgers could you eat in one sitting?

With people taking to YouTube to record themselves or friends taking on a food challenge.

Where they then took on a pre-existing eating challenge at a local restaurant.

And only sometimes came out on top.

Since the start of the program, we've seen an increase in the challenges and YouTube accounts dedicated to taking them on.

The likes of BeardMeatsFood and Randy Santel have paved the way for food challenges.

And there's another YouTuber who has got involved with the challenges.

Joey Chestnut- one of the world's competitive eaters.

The most recent video on his channel sees Joey undertaking 32 McDonalds Big Macs in just 38 minutes.

The 36-year-old from Kentucky completed the challenge in exactly 38 minutes and 15 seconds.

The 32 burgers he consumed in that time equaled to 15.36lbs of burger.

A total that is over a man's recommended weekly calorie intake, which is 17,000.

But he begins to struggle.

By 5 minutes in Joey is beginning to sweat.

And at 16 minutes he admits his throat is 'tired'.

In the end, Joey looked very relieved to have finished.

And it keeps rising.

If you need to see this yourself in order to believe it, you can check out the video here...

In the description, Joey wrote an explanation saying, "Since being a kid, I've dreamt about eating as many Big Macs as I could. As the ultimate cheat day event, I ordered 32 Big Mac sandwiches from Uber Eats and recorded the experience."

"According to McDonald’s, the Big Mac features 2 100 percent pure beef patties and Big Mac sauce sandwiched between a sesame seed bun. It’s topped off with pickles, crisp lettuce, onions and American cheese for a 100 percent beef burger with a taste like no other".

He continued writing, "I remember being a little kid and they would sell two Big Macs for $4 and me and my grandpa would get four of them. I’d end up eating three."

"And this is bringing me back to being a kid. Me and my grandpa would go back to the same McDonald’s every time. And it’s crazy, when I drive by that McDonald’s I still kinda just think about it."

"I think about all the times I was there with my grandpa and it’s weird the way that food takes you back and helps you remember things. With Big Macs, I definitely remember my grandpa."

In the description, Joey also explained how it was possible for him.

He added, "I’m still amazed at how good the Big Macs tasted. It’s so much easier to eat a food that you’re familiar with and your body just already knows".

As he finished in 38 minutes, some people are claiming it to be a world record, although it has not been confirmed yet. If it was a record it would not be Joey's first, as he currently holds a record for eating 74 hot dogs in 10 minutes.

So do you think you'll be giving this challenge a go?