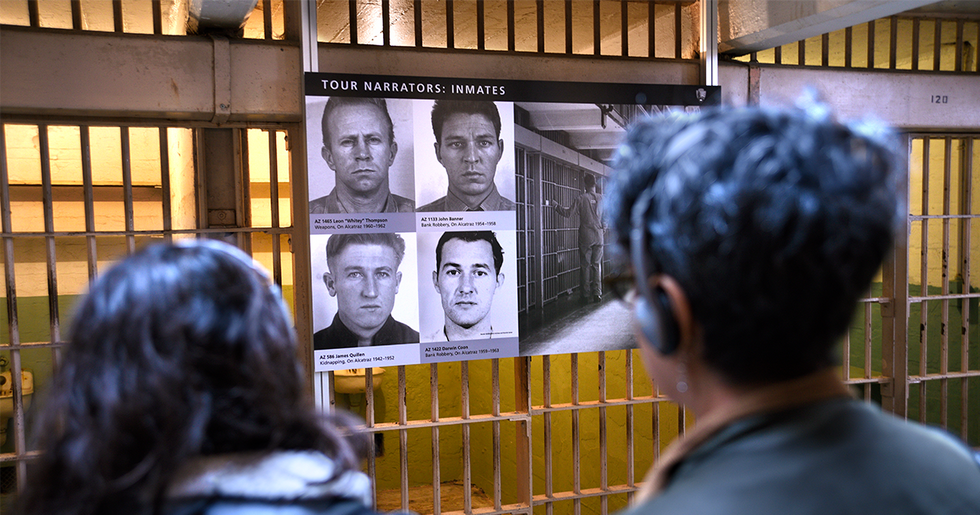 Alcatraz is a place of legend, the inescapable prison that housed the most dangerous criminals in America.

For years we all believed that no one had ever succeeded at breaking out of Alcatraz, although dozens have tried. But new evidence has come to light and it's giving us some tingly feels because this just may be the evidence that proves three men not only escaped but survived for years afterward.

The wildest part? One of the escapees supposedly sent a letter to the FBI. Read on to find out why.

The Island of Gannets

Alcatraz, a name that means "Island of Gannets" in reference to the birds that flock there, became a penitentiary in 1934, and was notorious for holding particularly difficult inmates.

Surprise: Alcatraz was not a nice place.

With three stories, this prison was a vicious place to live. The cells were bare, the staff was brutal, and the inmates were not much kinder.

The island was supposed to be inescapable

Thanks to the fact that the penitentiary sits on Alcatraz Island in San Francisco Bay, escape was nearly impossible. The water around the prison is freezing cold, and contains strong currents that make reaching the shoreline difficult.

As bad as it was, people were willing to risk death to escape.

Despite these challenges, over 30 people have tried to escape from Alcatraz. Until now, none were thought to have succeeded. Basically, this place is Azkaban in the real world.

If you want more proof of how hard it was to get out of Alcatraz alive just look at the other men who tried to escape. There were 14 others attempts during the 29 years that Alcatraz was in operation.

Most of these attempts were...not good.

Out of the 36 people who tried to escape, 23 were caught, eight died during the attempt, and five are missing (but most people think they drowned. That water is no joke).

The most intricate escape attempt ever devised

The attempt made by three men in 1962 was a little bit different. Frank Morris, John Anglin, and Clarence Anglin created an elaborate plan that began a year before it was actually put into motion. And let me tell you...it was seriously intricate.

So intricate it was actually ridiculous?

This absurd plan required stolen spoons and saw blades, an improvised drill, accordions, dummy heads, a raft made out of fifty raincoats, and an escape through the vents. Don't worry: you'll hear all the dirty details soon enough.

Who was Frank Morris?

Before we tell you all about how they escaped, we need to meet the criminals. Frank Morris was a criminal from the age of 13, and was arrested for everything from narcotics possession to armed robbery.

Frank was a wily man.

He was only moved to Alcatraz after escaping from Louisiana State Penitentiary and then getting recaptured. So it's no surprise that he tried to escape again. But who were his compatriots?

Who were the Anglin brothers?

Together with Frank Morris, John and Clarence Anglin created the plan. These brothers were inseparable, but not exactly what you'd call upstanding.

They were first caught breaking and entering when Clarence was 14, then went on to rob banks.

One thing we can say for these crooks: they typically did not use weapons and tried not to injure anyone.

Ok here's where it gets juicy. Morris was the ringleader and created a fairly ridiculous plan to escape. Each inmate widened the ventilation ducts in their walls with a variety of weird implements. How did they cover the noise? Well obviously with Morris' accordion music.

From these vents the escapees made it to the roof, where they created a raft out of fifty raincoats they stitched together and inflated with another accordion (who knew that was the go-to object for prison escapes).

Papier-mache: the most important part of any escape plan.

But the final and most important piece of the plan was that they created papier-mache heads to stick in their beds and fool the guards. Ingenius.

How did they make it to shore?

After escaping their cells, the inmates slid down a vent pipe, climbed barbed wire fences, slipped past the searchlights and gun towers, and took off on their raincoat raft.

But did they escape?

This is where we lose track of the details. The FBI at the time said no raft was ever found, and closed the case in 1979.

The investigation as it stands today

Are you ready for things to get weird? This case is about to reopen, because a letter sent in 2018, over 50 years after this escape, claims to be from the one and only John Anglin. You'll never believe what it says.

While law enforcement is quite suspicious that any of the three are still alive, things have gotten a bit muddy. In January of 2018, TV station in California received a letter claiming to be from John Anglin. What's even more wild is that he offered to give himself up in exchange for one simple thing.

What the letter says

“My name is John Anglin. I escaped from Alcatraz in June 1962 with my brother Clarence and Frank Morris...Yes we all made it that night but barely!"  These words come directly from the letter sent to KPIX 5. And the letter isn't the only source that claims the men survived.

Where have they been all this time?

It turns out that some of the Anglins' relatives have said for years that John and Clarence were alive. This photo even surfaced in 2015, supposedly showing the brothers in Brazil in 1975. The supposedly solid story of the FBI may have a few holes.

Here's where it gets tricky

BUT on the other hand, the FBI did fingerprint the new letter, matched it for DNA and for the handwriting, and found no evidence that it was from Anglin. So we're all left asking...is the letter real or a fake?

But why did he write the letter?

Let's assume for a moment that John Anglin is the author of this mysterious letter. What motivation could a man have for writing to the authorities 50 years after he escapes from prison? We'll let him tell you in his own words.

Here's what John Anglin said in his letter:" I have cancer. If you announce on TV that I will be promised to first go to jail for no more than a year and get medical attention, I will write back to let you know exactly where I am. This is no joke."

You read that right. This man is ballsy enough to offer to serve a single year of his remaining time in jail in exchange for cancer treatment. Let's be honest: I'd spend a year in jail if I got all my medical expenses too and I didn't even rob a bank.

But now we're all revisiting that night when they may have escaped.

And wondering how they did it.

If the men did escape from Alcatraz, they supposedly had a bit of help. Whitey Bulger wrote a letter to a nephew of the brothers, saying he had given them advice on how to stay hidden after escaping. He was in Alcatraz at the same time as the trio. High profile coach indeed.

Need a refresher on Whitey?

James Joseph "Whitey" Bulger Jr. was a leader of the Winter Hill Gang, and one of the FBI's ten most wanted fugitives.

Why was he such a high profile criminal?

It turns out Whitey Bulger was not the only famous fellow to spend time in Alcatraz, and names like his are why we're still obsessed with the prison today.

You've probably heard of at least one of the other high-profile inmates.

As one of the most famous inmates at "The Rock" as Alcatraz was called, Al Capone was a source of public fascination. The press were interested in what jobs he held while he was there, pestering the warden.

You may know Al Capone a bit better by his nickname Scarface.

Why is Al Capone so famous?

He made his name as an Italian gang member in New York and Chicago. He reveled in attention, and was famous for his massive amount of control in Chicago.

Specifically, Capone loved to make charitable donations and took on a role as a "Robin Hood".

On the other hand, he was part of the Saint Valentine's Day Massacre, which made him Public Enemy Number 1, and eventually led to his imprisonment.

But his legacy has continued in movies and other media.

The media and Alcatraz

Capone wasn't the only source of intrigue at Alcatraz. Robert Stroud even earned a public nickname thanks to his odd behaviors.

The Birdman of Alcatraz

Robert Stroud was not a nice guy. He murdered a John who refused to pay the prostitute he was pimping, then went on to murder a guard in front of the entire mess hall.

Those delightful behaviors are what got him sent to Alcatraz, where he found a love for canaries. He ended up writing two books about them, and there was even a movie made about his life. What a weirdly happy turn for a terrifying man.

These days Alcatraz is not what it used to be. It closed as a penitentiary in 1963, and now it's run by the National Park Service.

Instead of holding people in, now it welcomes folks.

Visitors can go on tours to see the facilities that held inmates. It continues to hold a deep sway over tourists, with some even claiming to see ghosts.

If you want to get even more up close and personal with the experience of trying to escape from Alcatraz, there are now monthly swims in the San Francisco Bay. Why not take a little jaunt through the choppy water? Sounds easy.

If you're not a "get in the water" type, all you have to do is take a 15 minute ferry ride to get to the island. It's certainly a different experience from the wild ride on a raincoat raft that Frank Morris, John Anglin, and Clarence Anglin took 50 years ago.

Check out some fan theories

If this story wasn't wild enough for you, there are plenty of myths and conspiracy theories about Alcatraz.

The ghost stories of Alcatraz

People report seeing ghosts in forms as wild as a large yellow cat or purple faces. They hear gunshots, banjo, or harmonica. There are legends that there are tunnels and dungeons honeycombing the island. If nothing else it's a great place for a ghost story.

So what about this amazing escape? Will we ever know if the three survived or not? The public is certainly interested, with dozens of articles, a History Channel story, and a CBS special.

I'm sure inclined to head to Alcatraz on my next visit to the Bay. Who wouldn't want to take a look at the vents they escaped through, the waters they rowed through, the fences they climbed over? The wild ongoing saga continues to capture attention.

Even though the FBI gave up, we're still curious

So even though this case is closed by the FBI and the only people still investigating are the U.S. Marshals, the Twenty Two Words detectives are on the case (by which we mean doing a lot of internet searching and creating elaborate theories to explain what happened).

If you think you know what happened to these three men, you better let us know in the comments. Did they make it to Brazil? Were they secretly in contact with their families? Or did they die on the crossing to the mainland? We'll never know.

A wilder theory yet

Of course, it's possible that we were all wrong and this Twitter user has the solution: the men were rescued by Amelia Earhart, zooming over them in a biplane. Ok. We'll check the Bermuda Triangle next.