Man Falls Asleep During Stream, Wakes Up To Find 200 People Watching Him | 22 Words 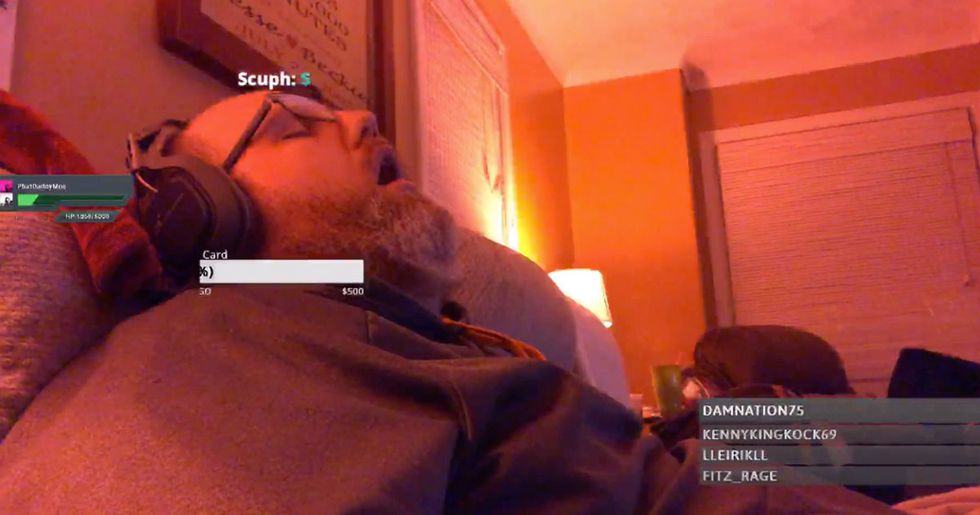 Man Falls Asleep During Stream, Wakes Up To Find 200 People Watching Him

Tabatha Fabray
JessieDStreams fell asleep during his 6 hour live stream on Twitch and woke up to find lots of people were watching him.

A Twitch streamer who fell asleep during a 6 hour live stream, woke up to find that his usual few followers had somehow multiplied into hundreds.

Twitch virality is sought after by hundreds in the gaming industry and is achieved by even fewer. So, if you're looking for that viral fame take a leaf out of this gamer's book and just sleep. We can't give you better advice than that.

What made this clip, which has been viewed over 2 million times, even better was JessseDStreams' reaction to his new found fame. It was priceless.

It can be all too easy to fall asleep in places other than your bed.

As this pooch knows only too well. Sometimes when you have to nap, you just have to drop where you are.

You just need to find some sort of shelter or blanket.

my kitten jumped into my parents big bath tub yesterday but accidentally dragged a towel hanging on the side in wit… https://t.co/dXElXfdQhp
— kenz (@kenz)1527564764.0

This kitten has the right idea. He looks like a little burrito all wrapped up. It's making us sleepy just looking at him.

Little snooze on the subway. Standard.

Who hasn't fallen asleep on the way to or from work? It's the motion that does it. The only downsides are drooling or falling asleep on someone else's shoulder. #Embarrasing.

Yes we know this is a prank but it definitely happens for real too. Not acceptable. Invest in a neck pillow please.

Every man loves a bro nap.

Ross and Joey may have felt guilty at this secret liaison but they also both admitted it was the best nap they had ever had. Worth it? Totally.

Sleeping in the office is never a wise move.

If you do then you must accept the consequences, even if that means relocating to Tulsa.

Is he really asleep on national TV?

Although this sleepy worker is just hilarious!

Either these ladies have been burning the candle at both ends or they have been mixing some cough mixture and sleeping tablets. Either way not ideal when you have to deal with members of the public.

To be fair a Brexit debate would send us to asleep too.

One MP had a right little snoozed in the UK's House of Commons during a Brexit discussion. Maybe he had a late night. Or more likely he was just bored sh*tless.

And even a little montage for your viewing pleasure.

We feel a little bad for these sleeping beauties who have no idea they've been snapped while they sleep. Great for us though.

When you get woken up unexpectedly.

Where the f*ck am I? What is going on? What day is it? All perfectly valid questions after an unplanned siesta.

JessieDStreams fell asleep during his 6 hour live stream on Twitch and woke up to find lots of people were watching him.

You know, hardcore gamers who stay up all night and watch other people play video games. Not that we're judging.

When he woke up 200 people were watching him.

Most of them had probably spent the last 2 hours screaming wake the f*ck up at their screens.

Some people even gave him money while he slept.

Yes, you heard correctly. This man received money donations for napping. That's the dream isn't it? We are definitely in the wrong job.

His reaction was priceless.

Fancy seeing you here. He didn't seem noticeably perturbed that he'd been asleep or that people were watching him. Just an everyday occurrence for this dude.

Huh, I must have fallen asleep. Good nap though. Feeling very rested now. So where were we?

As if nothing out of the ordinary had happened. Business as usual. Now where are my chips?

Sleeping on the job again.

Very naughty. Even if your job mainly involves doing very little. It's the principle of the thing.

In fact his job seemed to entail mostly just eating.

JesseDStreams streams on the 'Just Chatting' category of Twitch where, ironically, he does very little chatting. He mostly eats and watches TV.

The video has since had two million views and is the third most viewed video on Twitch. Check out below to see what's beaten it to the top spot.

No, we couldn't believe it either. Are we missing something? The guy was just sleeping right?

He should definitely consider changing it. He is officially now more dreamer than streamer.

Although he may be in trouble as apparently napping is frowned upon by the Twitch community.

Not napping in general. Napping while streaming. Although due to the massive reaction from the public towards this post and the free publicity for Twitch, we doubt they will be pressing charges.

The video has, somewhat surprisingly, made it into the top 10 Most Viewed Twitch clips of all time.

In fact it currently stands at number 3. What ever could have beaten this fascinating clip I hear you ask? Well...

In at number one is Docs house gets shot at.

A streamer abruptly stopped his live show after a passer-by fired a shot at his house and broke a window. His reaction needs to be seen to be believed.

Another massively popular one: Streamer's daughter walks in oh him playing a scary game.

Babies can be scary but possibly a slight over reaction to your own flesh and blood. His high pitched screams will have us chuckling for a long time.

At No. 4, Vive user finds a female in Star Trek VR.

The video sparked a huge debate on YouTube with some calling it offensive.

S1mple FPL 1V5 comes in at number 5 with just over 2 million views.

A bit gory for us but whatever floats your boat. He looked like he was enjoying himself at least.

Blow up Tuesday of course made the top 10.

Mark Zuckerberg being grilled about his personal life. Somewhat unsurprisingly he did not enjoy the questioning. Maybe he really did have something to hide.

Fortnite is literally taken over the gaming world so we weren't surprised to see it feature in the too 10 most viewed Twitch streams. We wonder how may of the 1.6 million viewers were 13 year old boys?

Tune in next week to see 200 people watch paint dry for 4 hours!