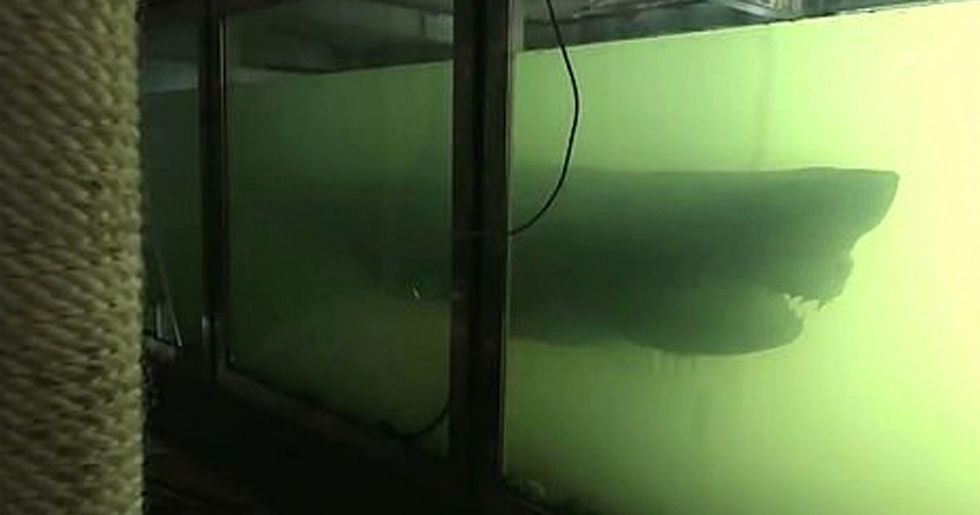 What most haunts your nightmares? Fear of failure? Unfaltering hordes of undead brain-eaters? Translucent ghosts reflected in the bathroom mirror? Cats? Clowns wielding bloods-stained machetes? Sex? Nakedness? Waking up? The sound of saliva being moved from one side of the mouth to the other? Enclosed spaces? Wide open spaces? Swarms of cockroaches sweeping over the kitchen floor like some kind of living carpet?

How about breaking into a derelict wildlife sanctuary to find, in the basement, the darkened silhouette of a decaying shark, suspended, unmoving, in a green tank of formaldehyde? No, seriously, this is real...

In a disused wildlife park in Victoria, Australia, below the many rooms covered in broken glass, litter and human waste, some unfortunate urban explorers stumbled upon something too creepy to seem real. It honestly looks like something out of a Wes Craven film.

I should come clean

Right, I should come clean here, since I was very young, I've had this indelible fear of sharks. Let me explain.

It comes from movies. Well, specifically one movie - Jaws. My best friend's brother forced me to watch it when I was six, and I never got over it.

After I watched Jaws, I found it impossible to face open water without the incessant feeling that a monster was going to come up from the deep.

It's almost a feeling of vertigo, that I don't know what's underneath me - I get nauseous whenever I can't see the bottom.

Things got worse when I watched 'Deep Blue Sea' when I was eight. Particularly the scene where Sam Jackson gets chomped.

In an effort to cure myself, I tried to laugh at my fear by indulging in the vast array of ridiculous shark films that have come out over the past two decades. Such as...

Sharknado is a film about - you guessed it - a tornado of sharks. I can't remember how this came to be in, but I don't think it's important.

This film's great, and contains the wonderful scene where the mega shark jumps out of the sea to eat a plane.

Then there's the immortal 'Sharktopus'. I'll let the gif speak for itself.

'Ghost Shark' is among the best of them. It's a about a ghost shark that can get you anywhere you are. I can't remember how they got rid of it - possibly a shark-based exorcism?

But, the films never really cured me. I'm still connected to my own ghost shark, lurking somewhere beneath the blue.

Of all the films my subconscious conjures up when I think of sharks, this one, taken in Australia, is amongst the worst.

It begins with two urban explorers breaking into an abandoned wildlife park.

Left behind, are some odd remnants from its lived past. Like this cake.

Over the course of the video they begin to press deeper into the complex, finding scattered litter and broken glass.

Then they find the basement, and that's where it all gets freaky. Never go into the basement. Haven't they seen a horror film?

And then... Well I'd spoil it for you. You're going to have to watch the video.

Here's the video, watch it all the way through to get a feel for the suspense, it really is amazingly filmic.

How creepy is that?! I'm not sure if it's the green of the formaldehyde, or the way that the shark seems to float in mid-air. But I just find it terrifying.

But why was it closed?

Watching the video raises a lot of questions. Why was it closed in the first place? Well, I'll tell you.

Not closed, but shut down, in 2012 by the Department of Sustainability and Environment. For not holding a license to display animals in public.

Don't worry about the animals.

Don't worry about the animals. They were all taken by the RSPCA, who I'll assume looked after them. Not the shark though.

The man behind all this is called Dom Krapski, an urban explorer, who left to find the abandoned park in January.

Now the video's gone viral, with over 9 million views and an extra 50,000 subscribers to the channel.

Check out his uploads.

You should look at the rest of the uploads. The urban explorers trespass on some pretty interesting places like...

An abandoned mansion complete with water damage and an overgrown balcony.

A derelict Chinese restaurant complete with fire damage and graffiti.

As if the horror flop, The Nun, didn't knock it on the head. Here's an abandoned catholic school.

It's a shame the urban explorers didn't sell the tank to a gallery. They could've become leading conceptual artists.