Man Finds His Dog's Stuffed Toy, Nurses It Back to Health With Tiny Homemade Hospital | 22 Words 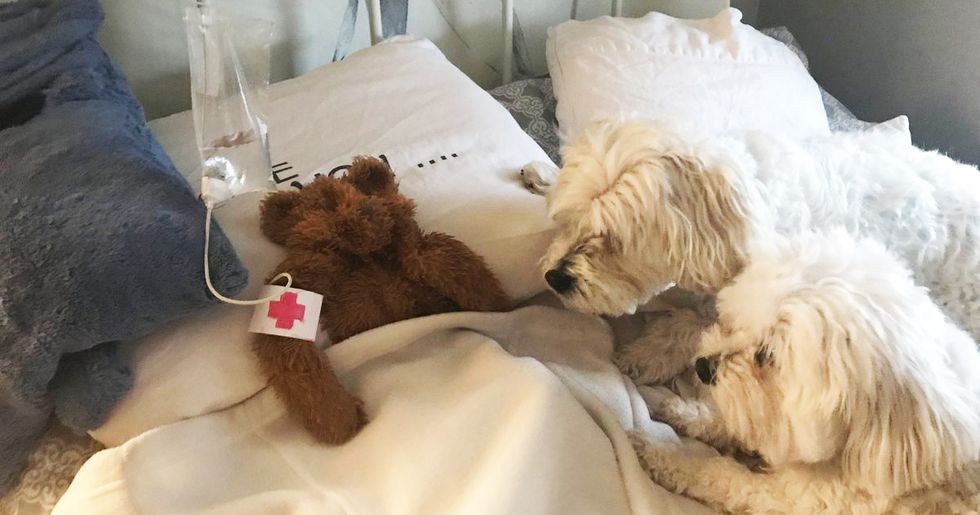 Man Finds His Dog's Stuffed Toy, Nurses It Back to Health With Tiny Homemade Hospital

It's official. We've found the cutest story of 2019 and it's still only January. Transport yourself back to a time when you still had stuffed animals. Chances are you had one or two that were your "top dogs." All other stuffed animals bowed down to the power you bestowed upon your weird clown doll with a missing eye or that pig with the voice box that hurt real bad if you hurled it at your sister just right. Just me?

But what happens when those toys do lose an eye or get their squeaker ripped out? Well, instead of throwing them out, maybe we should all do this:

It's like an episode of CSI. A dead stuffed animal... or so we thought. One suburban dad wasn't convinced.

But it doesn't look good.

He'll need to be rushed in for treatment ASAP. That's the only way he'll make it.

You're looking at the face of one of America's top stuffed animal doctors.

I know it doesn't look like much, but under that goofy dad-ish exterior is a hardened surgeon who's seen it all.

He found a pulse!

Not sure what a pulse is in this instance, but let's roll with it.

Well, it's not quite flowers, but it's always nice to see the family in support.

These poor pups look like they're expecting the worst. But this story has a happy ending as the little guy was sown back to life. Congrats, dad!

Modern medicine at its finest, folks. I also love that the dad rigged this beautiful scene for authenticity.

And the internet is loving it too.

As of writing this, the story has over 100k retweets, and 400k likes. I wish I could go that viral.

And apparently, this isn't uncommon!

People chimed in with their miraculous "recovery stories."

Is that a fake fur squirrel on a real fur rug?

It's definitely a squirrel.

Does anyone else think this looks like something out of a Tim Burton movie?

Get ready for the sequel to Frankenweenie, which is: Frankensquirrel. Coming this summer.

But seriously, at least the pup looks happy.

Maybe this time he won't viciously murder that squirrel.

Eh, who are we kidding? It'll probably happen again.

But as long as there are good, hard-working surgeons, like this Twitter user's mom, we'll all be okay.

Can we talk about those other two cuties for a sec?

God, it was like they were having to say goodbye to a loved one that they spent their whole lives chewing up and throwing it aside. Sometimes it's really difficult to face your past like that. Sorry, I'm drowning in existential crisis right now.

See Sparky, this is why we don't try to kill our friends. Your actions have consequences!

Hey, I have a question. What does Snoop think about all this?

Oh, thank goodness he had something to say. I agree, Snoop! I agree!

This is like the most upper-middle-class image I've ever seen.

Stockings, fireplace, cozy slippers, and sewing needles. Who transported us inside of this Martha Stewart Living magazine? I would know, my mom was friggin obsessed before she, you know went to jail and everything. Plus, I couldn't bring up Snoop Dogg without bringing up Martha Stewart.

You thought I was joking, but I would literally never write a joke on this website. Everything I say is rooted in fact. Like all that stuff up there about me and my sister. It's all real. (It's not.)

Are you happy now? Now that this has gone in the direction of super sad? You asked for this dear reader.

I'm not crying, you're crying.

Every time I write about dogs, I'm reminded that we are not worthy. The only thing that makes us superior to dogs is our opposable thumbs, and even then, I'm still not sure.

Can we see something less sad and more cute?

@oohhhkayyy The cutest part of this is the dogs on the bed keeping watching over him. This entire family is preciou… https://t.co/Eimr9wl6gh
— G.C. Fernandes (@G.C. Fernandes)1548461278.0

Yes! This is my current mood.

Apparently Dads have been making this joke since the dawn of time.

Are we sure all dads aren't just the same dad and that's why they tell all the same jokes?

This poor lil guy got left in the rain.

@oohhhkayyy @catalishus2 My dog left one of her babies outside in the rain. He is currently drying out in a broom r… https://t.co/C1ouAR82v2
— lauraincognito (@lauraincognito)1548463563.0

But honestly, this looks more like some kind of medieval torture device.

Nope, I take it back. It's definitely scary.

This one is less Tim Burton-esque and more reminiscent of those creepy toys from 'Toy Story.'

But hey, they all deserve a chance at a happy life.

I agree. My dad would never do this. He would just try to talk to our dog like he was a human and calmly explain "well if you can't treat your toys with respect, you don't deserve them" and then my dog would cry in its room for two hours and dye its hair. Wait, that was me again.

Someone needs to do a 10-year challenge on this stuffed animal, and I'd assume the results would be baadddddddd.

So next time you get mad at your dog for ruining their favorite toy...

Just remember that dogs are beings too, and we all make mistakes.

And hit us up with your cute dog stories!

Seriously, I'm a sucker for this kind of thing. Dogs are the only thing keeping me sane in 2019. I'm about to adopt but my roommates are against it. Can dogs pay rent?