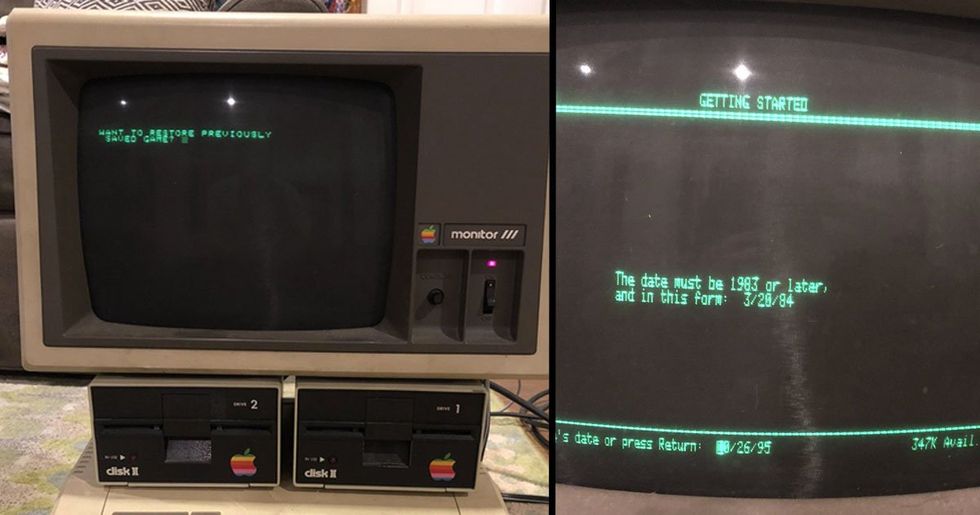 Personal computers have been around for over forty years, but current computers are almost unrecognisable from the originals. With the amount of updates we are constantly going through, it would be easy to think that nothing from the past could still work. But one man has just proven us wrong.

A man has just found his 30-year old Apple computer, still working just fine. And what he found is incredible.

These days, people barely use a computer outside of the office.

Computers are clunky, solid machines that we use when we want to do some proper work, or maybe for gaming. But how often do you see them outside of work?

Most people these days prefer something that folds.

Laptops are light, slick, and best of all, portable. In a world when we are constantly on the move, why would we want to be fixed in one place?

And that's if they bother sitting down at all.

With the arrival of smart phones, even laptops seem somewhat redundant. Everything can be done from anywhere in the world.

But one guy just made an amazing discovery.

In a time of everything getting newer and quicker, John Pfaff has gone the other way. He's found something far bigger and slower, but so much fun.

He's not known for his discoveries.

In fact, John isn't known in the computer world at all. Or at least he wasn't. John is a Professor of Law at Fordham Law School, New York City, who specialises in prisons and the criminal justice system.

John could not have been more surprised with this discovery.

After sitting unused for thirty years, John found his old Apple IIe computer. And it even has his old game! Lucky he saved his work back in the day.

John tried to recapture his youth.

This is tricky, because three decades later I can’t quite remember where I left off this round of Adventureland. https://t.co/Eoj7EqkHtb
— John Pfaff (@John Pfaff)1550373957.0

We all like to think we haven't changed that much as we've become grown-ups, but how well do you remember your ten year old self? This was really putting it to the test.

You know they want you to move on when they discontinue the accessories.

Back in the day before games consoles, computers where you had to play your games. You even needed special joysticks to direct, unless you wanted to just try to type.

How times have changed.

John shows his age here by thinking that his computer will look retro. It's not retro, it's just plain old-fashioned.

My dad typed up labels for all my floppies, which is really sweet to remember. He was so thorough that he even in… https://t.co/PdHEWzRYlh
— John Pfaff (@John Pfaff)1550375331.0

In the days before internet and Wikipedia, it could be hard to find information. It was much easier to just write down the bits you wanted to remember.

Remember the days of Reagan?

The days when film stars used to go into politics and the cold war with Russia made international events super tense. Okay, so maybe not everything has changed.

When flashing lights were the height of satisfaction.

Back in the day, computers were fairly limited with how much they could achieve. This game used the disk-drive light to make it feel more interactive.

Everything had more parts.

In order to use certain disks, you needed other disks to read them. There was a lot less built into the actual computers.

Are people running any faster now?

In 1984 Daley Thompson, potentially the world's greatest ever decathlete, ran a time of 10.44 in the Los Angeles Olympics. Last year, Kevin Mayer was the quickest decathlete with 10.64. Maybe not everything has improved.

The running might not have changed, but the music is in a different league.

The Rolling Stones, Michael Jackson, Prince, Madonna, The Clash, Joan Jett, and David Bowie. These are all people with hits in the early 80s. There's no way the game's inventors can claim that music just wasn't as important back then.

The computers were huge back then, and still they didn't have hard-drives. Imagine if you could show someone in the 80s just how small technology would become.

Are you old enough to remember the millennium bug?

For some reason, last century all the grown-ups started freaking out that computer systems wouldn't be able to handle the new year. Huge teams were even employed to make sure they prepared. Obviously it was all fine, but John decided to be careful, just in case.

A time when 'Mercurial' was a common English expression.

It's hard to believe that this is how sheets of text were presented. Microsoft Word might be clunky, but it is far clearer than these old screens.

Do you remember floppy disks?

Floppy disks, which soon became not so floppy, were used as a saving device. But even those could go wrong, so you had to back-up your back-ups. Makes you glad to be alive now instead.

It was worth going through everything for this real treasure.

John's father sadly died a year ago. Luckily this computer held a letter from him to John's eleven year old self. It might not be current, but it must be wonderful to hear from his father again in this way.

Even William Gibson, the man who first coined the term 'cyberspace' has taken notice. It's a little different to John's usual audience when he discusses the criminal justice system.

Dear Millennials: Generation X will not be available today. We're all going on a trip down memory lane. https://t.co/oxgRQFff7E
— Toni Panetta (@Toni Panetta)1550418989.0

This computer is so much of its time that it's a true blast from the past. It reminds people of a simpler time, when you had to look things up by hand, everyone had to wear suits to work, and only white, straight men had any power.

In some ways it sounds like the start of a new sci-fi film.

Similarly to how Jumanji got re-booted by children finding a dusty, old version of it, it seems almost like the same thing could happen here. Maybe it already has happened and we haven't realised. (Probably not though.)

Some fun could be had with this computer.

I bet the kids at the Genius bar have never seen anything like this. It's amazing that this computer is still running, and shows us that making Apple products only last for two years is a new trick.

Not everyone is convinced by this computer.

Absolutely true! But there’s something abt the solid click of the same keyboard I used 35+ years ago that playing U… https://t.co/rJXEWBglIC
— John Pfaff (@John Pfaff)1550377900.0

Some people feel that old games can still be enjoyed on consoles and computers that are fast, user-friendly, and modern. John claims that it feels better on such an old computer, but most of us will just have to take his word for it.

Even back then, Apple were all about branding.

Sure the computer is big, but is it really big enough to warrant four apple signs? And they're just the ones we can see. On the other hand, it did look pretty cool when it was in rainbow colours. Why can't Apple bring that back?

It used to be easier to make mistakes.

Computers were a wonder at the time, but they seem incredibly basic in comparison with the machines that we have now. Having said that, it looks like the same jokes remain funny.

But was it really worth the hype?

Big old computers went out of style for a reason. They were slow, clunky and used to break down all the time. They were incredibly infuriating.

Okay, maybe I'm being a bit harsh. These computers were incredible at the time. They could do things that had never been done before, they were available to the public for the first time, and they paved the way for every technological advance since then.

It's been one hell of a discovery.

It's true that it can seem hard to understand something that is so irrelevant to your own life. But this discovery has reminded everyone of a different time. Hopefully it can also remind everyone of all the lessons we have learned since then too.
20%

$33.95 $27.16
Buy Now
See More Deals
We hope you find these deals as awesome as we do! Just an FYI: we may receive a share of sales from links on this page