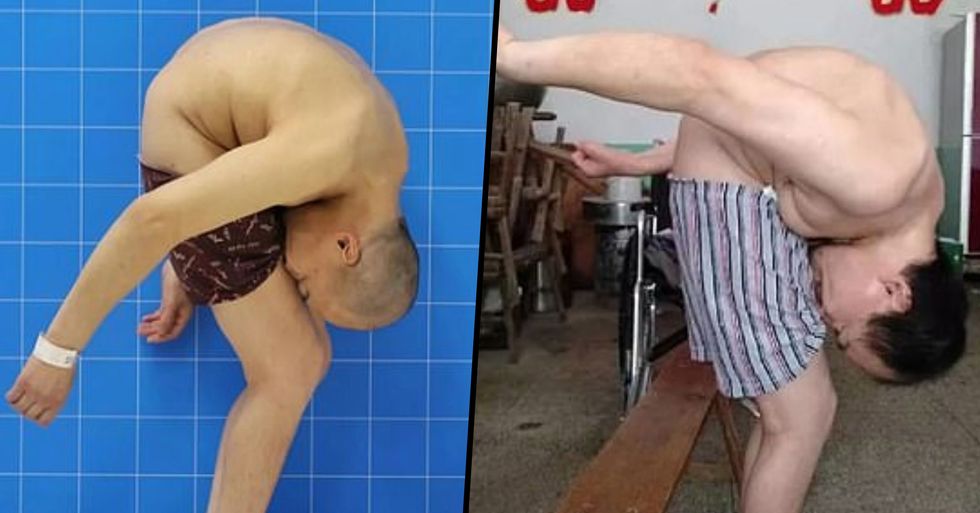 A man known as "the folded man" has recently undergone a surgery that has changed his life. The pictures are incredible so read on to find out how this change has impacted his life.

A Chinese farmer has undergone a life-changing surgery.

After being diagnosed with a rare disease that "folds" his body, Li Hua from China can finally stand upright.

It all started when he was nineteen-years-old.

That's how old he was when he was diagnosed with a disease known as ankylosing spondylitis, a rare type of arthritis that means his body started folding in on itself.

But his family was too poor to be able to afford the surgery to try and fix it.

So he has been living this way for over twenty-five years.

So, what is ankylosing spondylitis?

This disease is hardly ever talked about as it is very rare. It involves inflammation in the spine, making the back, rib cage and neck stiff and painful.

This painful inflammation causes the bones to wear away.

The body then starts producing lots of extra calcium in order to try and repair the damaged bones but this also occurs in a lot of the wrong places.

And of course, the bones then start conjoining with other areas.

This means that each individual bone in the spine starts fusing together which loses its overall flexibility causing the extreme shift in the posture known as kyphosis.

However, it can only be fully identified when the spine has curved over 45 degrees.

And there are several other causes for the illness including bad posture and abnormal development during birth.

Symptoms usually start when you're young and gradually get worse...

And in extreme cases like Li Hua's, it can last an entire lifetime. This then has a dramatic knock-on effect on other areas in life, like eating, sleeping and of course, social aspects.

The inflammation causes a lot of discomfort and can also spread to other parts of the body, which is why it is an extremely dangerous illness to have.

In terms of the United States, approximately 1.6 million people have ankylosing spondylitis.

There are things one can do in order to reduce the effects, such as physiotherapy and surgery, but the latter is only for very extreme cases.

The former farmer has been living with this painful condition for twenty-seven years but it has been particularly bad for the last decade as his face ended up pressing itself to his thighs due to the curving of his spine.

He was forced to rely on his elderly mother to take care of him.

Li Hua's mother, who is currently seventy-one, has looked after her son for almost 2 full decades as his condition got progressively worse.

But this surgery has been life-changing.

The forty-six-year-old underwent 4 separate high-risk surgeries last year and has spent the past 6 months in recovery.

And miraculously, it has given him a new lease of life.

Surgeons performed the procedures from June to December last year, hoping they could straighten out his spine, or at least bring back some more flexibility to it and they were successful.

And now the recovery process is going to help him walk again.

The professionals had to remove all the dead sections of his spine and waist, before breaking up the areas that needed to be uncurved.

And for the first time in a decade, Li Hua was able to lie down flat on his back and look at his mother.

The surgery ended with a full hip-replacement so he could learn to walk again by himself.

Recent clips of the man show him walking with a Zimmer frame.

They also show him doing some gentle exercises as part of the recovery process.

And even better news, he has now returned to his home town.

He's opened up his own little shop and continuing his recovery alongside his business.

This is the best news ever.

We wish him a speedy recovery.

If you want to see another heartwarming story, then keep scrolling...

This little child has a heart defect but still managed to survive the coronavirus... Amazing!