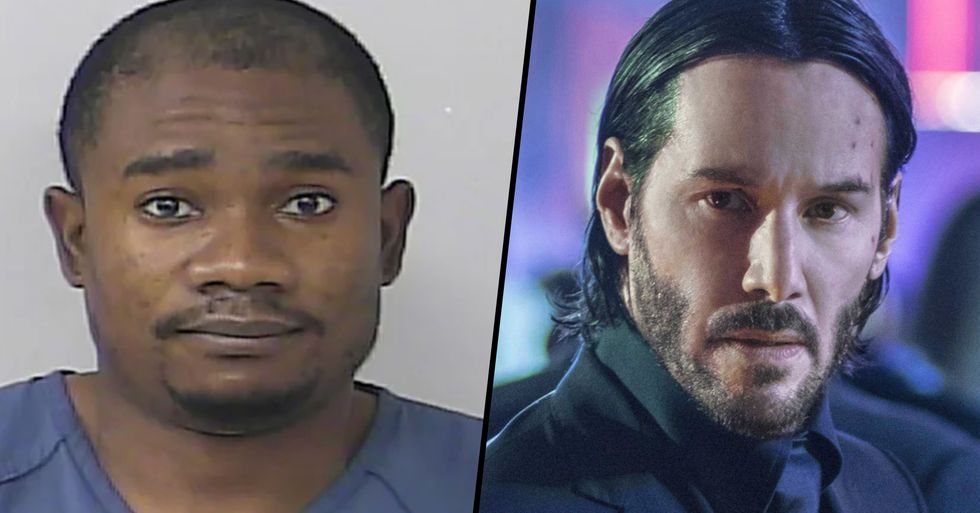 We know the John Wick series has many fans out there. The combination of pure action-packed films and of course, Keanu Reeves is too epic to deny... However, we were not expecting one man to use his name as a cover-up for a crime...

Read on to find out what heinous crime he had committed right before getting "John Wick's" guns involved...

As much as we love Keanu Reeves...

And believe me, we really do, we've never thought about making him an accomplice in a crime.

But this one man from Florida thought he could get away with it...

Little did he know his excuse was only going to get him into more trouble later on.

I mean, I kind of get it? There's something about him as John Wick that just has us mesmerized.

Is it the mean look in his eyes? The "I've got nothing to lose" attitude? Whatever it is it seems to have many of his fans utterly captivated.

Obviously, we loved the first John Wick movie, which was released in 2014.

But it was massively successful for a reason.

It's packed full of drama.

So, the Russians follow him to his home later that night.

They knock him unconscious, kill his dog, Daisy, and steal his car.

We'll forever have the epic scene in which Wick single-handedly murders a twelve-man hit squad imprinted on our minds. It's no wonder why this criminal decided to pick him as his literal partner in crime. Read on to find out what he was later jailed for.

Director, Chad Stahelski, and producer, David Leitch, were heavily influenced by anime and martial arts films when they made this flick and they used both fight choreographers and gun-fu techniques when shooting the fight scenes.

All-in-all, there's a fair bit of ambushing, a little bit of capturing, and more killing, as you would expect from an action-thriller.

But we never doubted John, not for a moment. I mean, I'd want him to have my back if I was going to try and lie to the police too but there's one reason why it just wouldn't work...

I just wish someone would have told this criminal...

Getro Gelin, originally from Port St. Lucie was stopped by the police who had permission to search his Porsche.

While conducting a thorough run-down on the vehicle, they found some weapons...

The police found a Glock 21 pistol, a semi-automatic rifle, and a bulletproof vest. Now, tell me what you'd need those for unless you were going to engage in a stand-off with someone.

But this man clearly thought he was in a John Wick movie...

Rather than owning up to the possession of an illegal firearm, he decided to blame his cousin for the entire thing.

His cousin being John Wick, of course.

This could just be an unnatural coincidence that his real cousin also shared the same exact name with a popular fictional assassin...

But he later confessed to having lied about his excuse.

He explained how he didn't want to give away the name of his real cousin so he said the first name that came into his head and it just happened to be a vengeful assassin.

However, this story takes a twist when we found out what he was actually arrested for.

It wasn't just the possession of a firearm. The police had been alerted to a domestic violence incident where a man had thrown a woman to the ground and threatened her with a gun before fleeing.

She told officers that he was hiding the suspected weapon in his car.

According to The New York Post, Gelin was arrested for aggravated assault with a deadly weapon and domestic battery and is being held in the county jail with a $3,500 bond.

So the lesson we learned here is...

Have a better excuse than a movie character accomplice when you've got a trunk full of weapons. I guess we can somehow make that relatable? No? Probably not. If you want to read more funny stories about criminals, then keep scrolling...