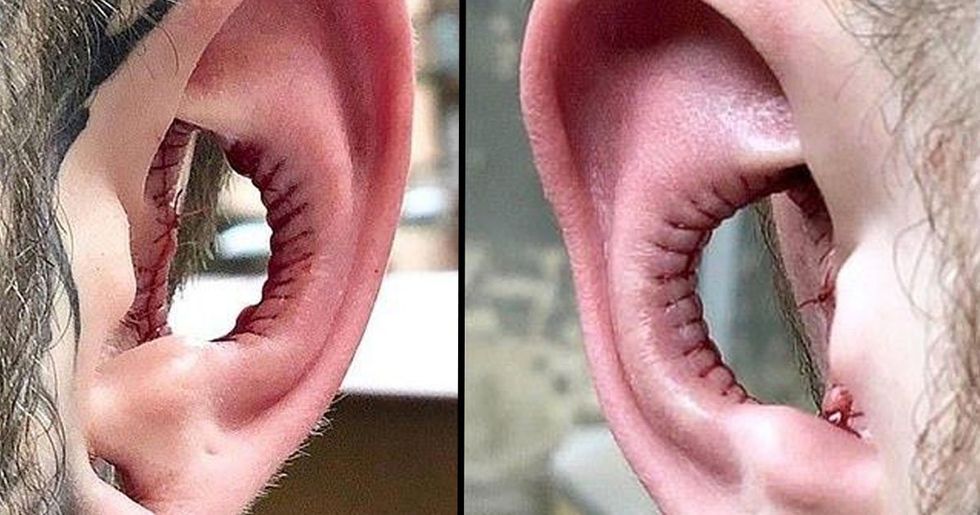 You know that moment when your stretched ears and tunnel piercings just aren't exciting anymore so you decide to get another big hole in your ear?

If you answered yes, you're not alone.

A new trend has recently emerged in the body modification sphere.

Not many people would choose to have half of their ear cut out, but one Australian decided that a unique appearance was worth the cost. He traveled across the globe to Sweden to get his conches removed.

The body modification artist responsible for his procedure explained that conch removal does not affect your hearing. But even his fans believed that that was just a marketing trick.

Some medical professionals were horrified to learn about the new trend and social media users didn't hold back their critical comments.

However, some people still think conch removal is an awesome new trend and can't wait to get it done themselves.

Charles Bentley took his body modifications to another level.

He had the insides of his both ears removed to make them look more unique, claims Daily Mail.

The conch removal was done by piercing and body modification artist, Chai Maibert.

When Bentley shared the "after" photo on Instagram, the world went crazy - some in a good way, most in a bad way.

The procedure is called "conch removal" because it literally removes a piece of the conch part of the ear.

That's the central part of the ear. It's also known as the "auricle" or the "pinna".

"Fresh #conchremoval on @charlesvbentley who traveled around the world from Australia to have this procedure performed by me at @calmbodymodification," Maibert wrote on Instagram.

"Truly humbled!" he added, and continued to answer the main question he knew everyone would have.

"To get some facts straight note that this procedure doesn’t make you deaf."

"It might impair your ability to hear the direction of sound for the first week or two until your mind has adjusted to your new ears."

He says your hearing should actually improve.

"Our ears don’t 'catch' sound as it did eons of years ago when our ears were bigger hence why we have to create a bigger 'ear' by cupping our hand around our ear to hear better."

Maibert is the owner of the popular Stockholm studio CALM Body Modification.

He's also received plenty of praise for his work. But Facebook users were far from impressed, Daily Mail says.

"I bet his ears whistle when he rides his vegan bicycle," one wrote.

"Ah, I see you’ve ordered the attention seeking package, how may I guide your unemployment experience today?" another one said.

Someone also added, "On behalf of all white people I would like to apologize for Chad. He knows not what he does."

Although Maibert had explained that conch removal doesn't affect your hearing, most people believed it to be untrue.

That includes some medical professionals.

According to Daily Mail, the concha is responsible for collecting the sound around you and sending it down the auditory canal to the eardrum.

It's also important if you like to know where the sound is coming from, rather than just hearing it.

This is the thing that most of the users were concerned about.

Medical experts who work with hearing specifically agreed with them.

One of them was Maryam Ghaderi, head of audiology at the hearing center House of Hearing in Toronto, says CTV News.

According to her, the outer ear is responsible for how well we hear.

"If you have that part missing, I would guess a bit of your hearing would be affected—probably your sense of localizing sound," she said.

"To say how much in terms of a percentage of hearing loss is hard to say."

Even Maibert's own followers doubted that he was telling the truth, says Daily Star.

One wrote, "The pinna (the outer ear) collects sound and helps us know where sound is coming from."

"Anyone who gets this done will have diminished hearing after. I'm a hearing doctor so I know a few things about the ear."

"It absolutely does impact your hearing, and unless you're looking to lose some hearing ability, that impact is negative."

According to the guide prices published on CALM's website, a regular piercing costs $50.

It might be offensive to people who were born deaf.

Jzeds wrote, "As a person who was born deaf without eardrums and ear canals and had to have 15+ surgeries since I was 2.5 years old, this is the dumbest and most misleading information ever posted on the internet."

"The only way to truly amplify your hearing from behind your ear, which is called BONE CONDUCTION, is through SURGERY."

"By implanting a screw that is literally drilled into your bone and then attaching a hearing device through it. How stupid are people?!"

eric w joked, "Handy for tying a rope through, making it very easy to drag him off to a mental institution."

Dee, Nelson: "Didn't someone get arrested in Australia for doing similar so called 'body work.'"

ThatsIt: "Okay. Did he not realize ears are there for a reason?! One being to protect the inner ear canal. What an idiot."

D-H-G: "Everybody is unique until they start following trends like body modification or tattoos and end up more alike than before they started..."

Rocksey: "Why? Just why?? Still, if he gets soaked in the rain, at least he can be hung up on hooks to dry off now I suppose!"

Josh Chavis replied, "Technically, gauging and ear conch removal started (and still continues in) Tribal Africa... Apparently, we just thought it was a good idea to bring this back."

But not everyone hates the new trend.

User ATOMICjohns8 said, "Conch removal is so rad, I want it."

Colin The Graham: "I like to start weird journeys on the internet."

"Like this morning," he continued, "I was startled by a picture taken after a cosmetic surgery to remove part of an ear. Now I've been through a few hashtags about body mods and #conchremoval and although it's not for me I feel like I kinda get it."

The hermit: "Anyone know where I can get a conch removal?"

Dave_ghost: "Conch removal and coin slots are the coolest things you can do to modify your ears. I love body mod stuff ugh."

Her.hell.boy, "He can't hear us, he got airpods in, oh wait they fell through his ears ?? jk I fuckin love it."

Botanicallabelia: "Very neat, very beautiful and it’s what Australians have to do now to get serious mods and well travel with a purpose puts the fun into it, people do medical travel all the time overseas and why should boobs, teeth, and organs be any different than mods!!"

"I went to Canada from Aus for mods and I’m willing to go ANYWHERE!"

Meanwhile, ReadBeforeCommenting pointed out to the haters, "Oh please. If this was done by some 'exotic' tribesman in Papua New Guinea you would have written some equally sheepish comment about how wonderful you think it looks."