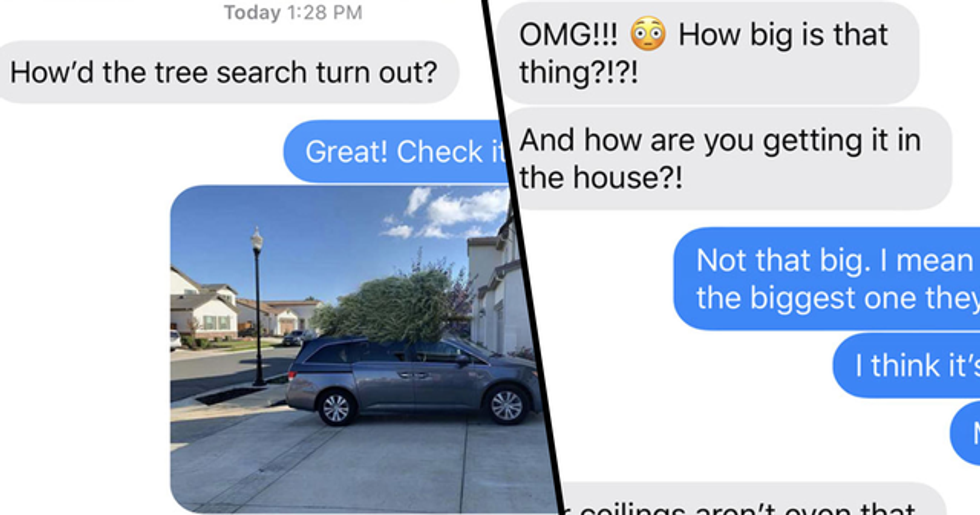 A man has gone viral after he hilariously pranked his wife after going Christmas tree shopping alone.

I mean, any woman who trusts her husband with single-handedly picking a Christmas tree is completely crackers in my opinion... Anyway, the man uploaded his prank to Imgur, which quickly went viral for his wife's rather amusing reaction.

The Christmas tree is the ultimate festive tradition.

Originating from the symbolic use of evergreens in ancient Egypt and Rome, our faithful Christmas tree has come a long way throughout the years.

Germany is typically credited with starting the Christmas tree tradition as we now know and love it, and they are ultimately the ones who introduced us to the festive ritual all those years ago.

Fast forward a couple of thousand of years...

And the Christmas tree is bigger and more popular than ever before.

Every year, millions of American families enjoy the festive tradition...

Gathering together as a family and decorating the Christmas tree has become a staple part of Christmas for most of us.

The Christmas tree process is supposed to be full of fun and laughter...

But some get a little more stressed than others.

And most people don't trust their other halves enough to choose just the right tree by themselves.

But one woman decided to put all her trust within her husband...

And sent him off alone to pick the family Christmas tree.

And her husband, who is clearly quite the prankster...

Decided to have a little bit of fun with his task.

He spectacularly pranked his wife...

And, luckily for all of us, he uploaded the results to his Imgur profile.

Though the man hasn't been identified...

And is only known by his username of eeplesandbaneenees85, his post went viral, with thousands of people sharing and laughing at his prank.

He started off by sending his wife, only known as Lisa, a photo of his chosen tree strapped to the roof of their car.

It's a pretty monstrous plant, I have to admit, and Lisa clearly thought the same, replying with: "OMG!!!! How big is that thing?!?!?! And how are you getting it in the house?!"

He replied by telling her that the tree was "maybe" fourteen feet high...

In which his clearly flustered wife responded: "Our ceilings aren't even that tall!!!"

He continued to reassure Lisa that all would be fine...

Only to send a photograph of a very large and very squashed Christmas tree squeezed into their living room, noting: "OK. It's not fine."

After Lisa told him that he was never again to shop for a Christmas tree alone, he then dropped the price bombshell on her... Because the salesman clearly didn't expect anyone to buy such a monstrous tree, he had secured a "deal" of $190. Apparently.

It all proved to be a little too much for Lisa...

And when he joked about needing a bigger stand for the oversized plant, she responded: "Legitimately trying not to lose my s**t. That's way too big for our house."

And when he revealed that he was pranking her with photoshop all along...

She responded with a swift, "I HATE YOU!!!!", in which he sent a photo of the version he was going to send...

A closer look at the masterpiece...

Brilliant. I, for one, would definitely squeeze that monster into my living room.

What a way to get into the festive spirit!

Luckily for Lisa, the giant tree was simply a photoshop prank... But for some, it was a reality.

And noted that they have genuinely had to squeeze oversized Christmas trees into their homes in the past. One user wrote, "My dad actually got one like this once. It was about a foot taller than our ceiling. Scraped the s**t out of it." While another commented, "My dad got a tree that was too big for our ceiling AND CUT THE TOP OFF IT TO FIT. My mom was p****d." Noticing a pattern with dads here...

Pick your own tree. Trust no one this festive season! For more festive stories, keep scrolling to hear one mom's ingenious life hack when it comes to Christmas shopping with children...