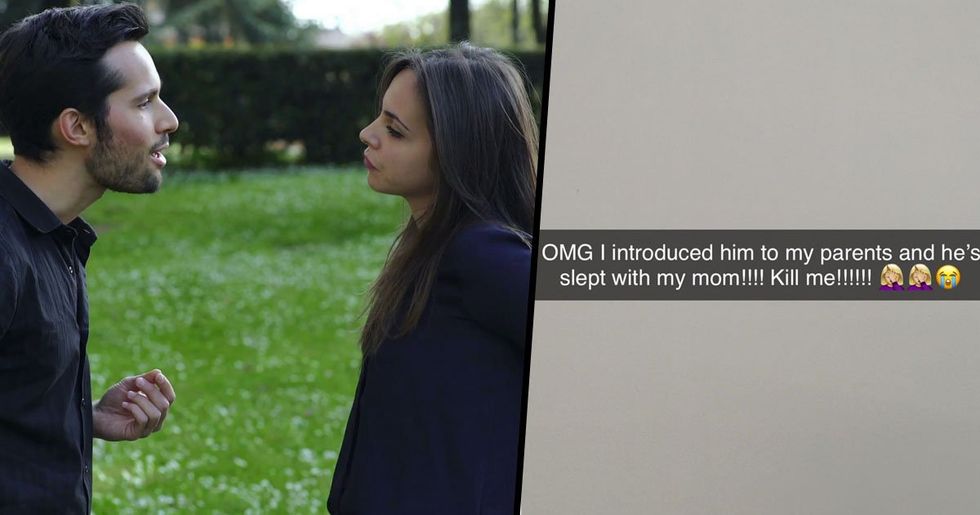 Meeting the in-laws is always a nerve-wracking experience, but for one young man, his worst nightmare came true when he realized he'd slept with his girlfriend's mom...

The anonymous twenty-one-year-old took to the "Today I F****d Up" (TIFU) section of Reddit to tell his unfortunate tale. He had met his nineteen-year-old girlfriend on the dating app, Tinder, and a few dates later, the couple had really hit it off with the honeymoon phase in full swing. What could possibly go wrong?

One night stands are usually very quickly forgotten about and moved on from.

A few months prior to meeting his new beau, the young man embarked on a wild night out in his small hometown at the local rock bar. He explained how living in a small town with only around three decent nightclubs means that you often bump into the same people in the same places.

On a night out in the rock bar, he spotted an attractive, older woman and plucked up the courage to talk to her.

The same thing happened a few weeks later in the same bar, and, this time, she took him home with her. He figured that he would "learn a thing or two" from an older woman, so why not?

After the drunken and lustful evening, the young man made his way home and never saw the older woman again. Not being too torn up over it, a few months later, he began seeing a girl a little closer to his age after meeting her on the dating app, Tinder.

All seemed to be going pretty well.

His new relationship was blossoming and he was invited round to her parents' house for dinner. Little did he know what was to come...

The realization hit him pretty quickly after getting to the house...

The poor young man recalled the moment of horror when he realized where it was that his new girlfriend lived - the place at which the one night stand occurred. Walking down the street, everything was becoming awfully more and more familiar, until she stopped at that very same door and said, brightly, "this is me!".

One cannot imagine his pain after realizing that the door that he had stumbled through for a cheap, one night stand, was the door of his new girlfriend's family home. Desperately grasping at straws, the young man recalled how he, in a panic, had complimented her family home and even asked how long she had lived there!

She told him how she'd lived in her not-so-family home "pretty much her whole life".

She lived there with her parents, her little sister and the family dog. Little did she know the antics that went on there a mere few months ago - involving her mom...

The moment of truth...

With her entire family on the other side of that fateful door, he knew that he couldn't just walk in and pretend that nothing had happened. He had to come clean.

The tried to find the right words.

How, exactly, would one go about telling their new partner that they had enjoyed a steamy night of drunken passion with their mother? It's not even worth thinking about, but this poor guy had to think exactly this. And he didn't have long to come up with an answer.

The saying "I F****d Up" barely does this moment justice. His poor girlfriend was initially shocked, but the real shock kicked in when she realized the sad reality that he wasn't joking...

Our thoughts and prayers go to the poor girl in this vomit-inducing situation.

Not a regular mom...

This clearly isn't a regular mom; this is a cool mom...

The final nail in the coffin.

The poor girl knew that her boyfriend wasn't joking when he got her mom's full name right; it was something that she hadn't yet told him. Extremely shocked doesn't quite describe how she must have felt after this bizarre situation had taken place.

We have to give it to his girlfriend, she managed to keep her cool. The honest young man said "I knew she was level-headed from our first few dates so thankfully she understood and didn't attack me. We do agree we can't keep seeing each other (duh) but I really did like her which can be rare for me, so it f*****g sucks".

It was truly a series of unfortunate events.

The fact that his girlfriend said that she lived with "her parents," kind of hints that there's a dad in the equation. "She didn't mention her parents marriage and I didn't ask. I also don't know how the house was free them a couple of months ago when I was last there," he explained. "All I know is that I f****d up".

It has to be said, this young man deserves a pat on the back for his shameless honesty. Despite the horribly awkward situation, his fellow posters agreed that the young man did the right thing by coming clean and, at the end of the day, he wasn't to know.

Nods of approval all round...

One user went on to say, "Props man for telling the truth. You're a gem and any girl would be lucky to have you. Sorry about your rotten luck though".

Making the best of a bad situation...

Despite this guy's "rotten bad luck," he's made the best out of a bad situation. Rather than keeping it quiet and complicating the situation further, his honesty made people really respect him. What a guy! Anybody got his number?...

It isn't known what went down between the girlfriend and her raunchy mom, but it's pretty obvious that she's no longer in the good books and she isn't the only one in the doghouse. One man found out that he was in serious trouble with his wife-to-be when she read his affair texts, rather than her vows, at their wedding. Yikes. Read on to learn more about the cringe-inducing tale...