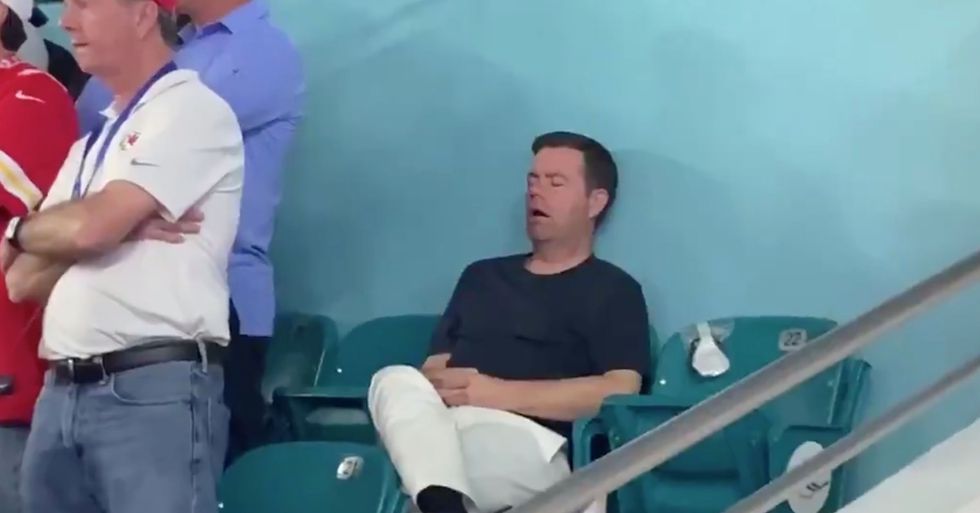 Man Goes Viral After Falling Asleep During the Super Bowl

The biggest night in the sporting calendar arrived once again last night.

But amidst all of the excitement and celebrations, one man fell asleep during the game and he has gone viral.

Complete with celebrity-studded halftime shows, eye-wateringly expensive ad slots, and of course, some great football to go along with it - there's no doubt the Super Bowl is one of the biggest sporting events of the year.

Let's start off with the star-studded half time show...

And last night, the world tuned in to watch the highly-anticipated Super Bowl LIV...

Shakira and JLo were the headliners of this year's show...

And the show marked the first time the music icons have ever performed on stage together.

But of course, amidst the star-studded ads and long-awaited musical offerings, this a game of football...

And only one team can come out victorious.

Twenty-four-year-old quarterback Patrick Mahomes became the youngest player ever to win both the NFL season Most Valuable Player and the Super Bowl MVP award as well.

And our country, along with the rest of the world, came together to congratulate the team and celebrate their victory.

But it seems that the game wasn't exciting enough for everyone...

This revelation comes after a man was caught sleeping in the stands during the first quarter of the game.

Karisa Maxwell was sat a few seats away from the snoozing man...

Karisa is the deputy editor and producer at Sporting News, and she did the only thing she felt was appropriate by filming him on her phone.

The unknown man was shamelessly filmed snoring in his seat...

And after the video was uploaded to Twitter, he has gone completely viral.

And this was all within the actual day itself.

People were overjoyed with the video...

And many were astounded at how the man stayed so soundly asleep during the racket of the Super Bowl.

There were a lot of questions...

And many people were simply puzzled over the fact that the man was sleeping away his very expensive Super Bowl ticket.

But there was an update...

News travels fast, and it turns out that his friend had gotten wind of the viral video by the time he woke up. All we can say is... wow.

Things were about to get even better...

So, I realize everyone was expecting an update on the sleeping man. Following halftime, I hesitantly walked up to… https://t.co/JaWUnNGUdY
— Karisa Maxwell (@Karisa Maxwell)1580742280.0

It turns out that the sleeping man wasn't at all impressed with being filmed, and he irritably declined an interview when Karisa approached him later on in the game.

Watch the full video for yourselves here...

Somehow, this man is sleeping through the #SuperBowl. We’re still only in the first quarter. https://t.co/erK0gfpqvQ
— Karisa Maxwell (@Karisa Maxwell)1580688402.0

And let's face it, he was probably annoyed because he had missed most of the game!