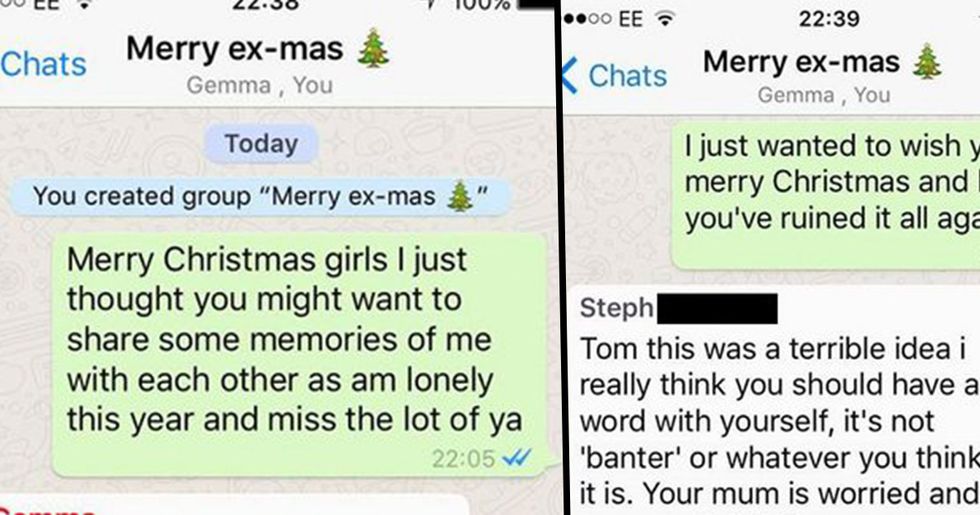 What makes your Christmas merry? For most people, it's some combination of family or friends, good food, and presents. But for one guy, it was a WhatsApp chat group with all of his ex-girlfriends.

Sounds terrifying, right? And the reception to this strange chat group was definitely less than jolly. After all, being in the same place (virtual or otherwise) as more than one ex is usually something people avoid like the plague. So why did this guy think it was a good idea?

Keep scrolling to find out how the whole chat group debacle unfolded. Plus, this little story has an ending that will probably surprise you.

How do you handle exes?

For most people, the answer is to avoid them. Or, for a lucky few, it's to remain friends. But one guy did neither.

Instead, he set up a WhatsApp group...and added all of his exes to it.

And the reason behind it was apparently his feeling lonely. Yikes.

He wanted to spread Christmas cheer.

Of course, the question is: did his ex-girlfriends want his brand of holiday cheer?

I'll let them answer that question:

YOU'RE TEARING ME APART, LISA! Yeah, no. They definitely didn't approve of this.

Bella is angry and ready to fight, Gemma is watching with disdain, and Lisa just doesn't even want to deal with any of it.

Most people would read the mood.

Because that chat group is the very definition of a hostile environment.

But this guy was determined, for some reason.

Hey, we can't complain. Then we wouldn't have all these funny texts to read!

A fifth player enters the ring.

But it's because she feels the need to set the record straight!

It's the battle of clarifications.

It's lucky for this guy that Gemma just seems amused by the whole situation while everyone else (including him) is duking it out.

Dang it, Bella! Can't you see this was supposed to be a jolly little chat group?

And also, Steph with that dose of reality.

Should he maybe have realized this was a terrible idea from the start?Sure. But at least someone said it eventually.

But never mind that.

It's Christmas! And, believe it or not, this guy is about to experience a veritable Christmas miracle.

Somehow, some way, Tom still got the girl. Well, a girl.

But not every interaction with an ex ends so positively.

And Instagram account textsfromyourex documents the terrible, hilarious conversations between exes. Get ready for some texting cringe!

Aw, come on! Who else was disappointed that neither tacked "ya filthy animal" on to their Merry Christmas?

This attempt at friendship didn't go as well as Tom's.

Honestly, is this really so hard to figure out?

When you text your ex so that you can mooch off of them:

Pro tip: don't keep using your ex's Hulu account after the breakup. And yes, that also applies to Netflix.

This is just sad. And gross.

They're not even trying anymore, are they? Of course it's a no!

A picture is worth a thousand words.

Nothing was said, and yet we all understand what that person is feeling. Loud and clear!

They say to wait a bit before texting, play a little hard to get, but taking 3 years to text someone after the first date is definitely too much.

I suspect we will aways have questions about these extremely strange texts.

Now this is a comeback.

Sounds like the guy is gonna need some ice for that burn.

Does this guy know what 'engaged' means?

Because in most cases it implies a commitment to long-term monogamy. But go off, I guess.

Meanwhile, this person may not even know they broke up.

You'd think that being broken up would be an obvious reason for lack of communication.

Problem-solving at its finest.

Wouldn't it be great if that response left the guy going, "hey, why didn't I think of that?"

Turning down a booty call:

Sometimes being a terrible person kinda throws a wrench in the relationship, ya know?

I'm gonna stop you right there.

What does it say that about their relationship that one person didn't even let the other finish their thought?

Forget texting - what about Venmo?

When you demand financial compensation for emotional damages. It may not hold up in court, but you can always try!

What even is this 3am text?

Can you imagine how long the time between communication must have been if she's been married for three years? WOW.

The life cycle of a relationship:

Well, that ended quickly. What a rollercoaster!