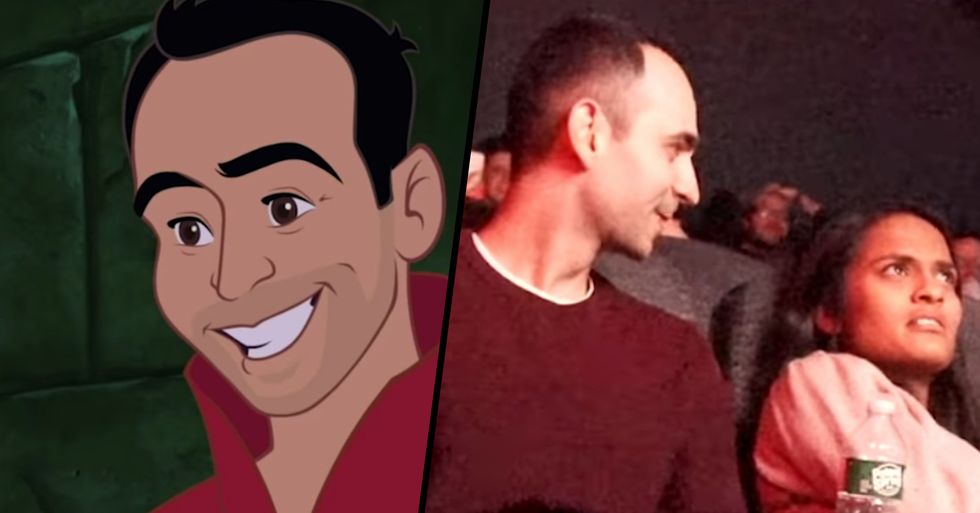 Elaborate proposals have become a part of our tradition now. From flash mobs all the way to romantic dinner dates, we've seen so many creative ideas brought to life. But just when you think you've seen it all, someone manages to come up with something beyond imagination.

Keep scrolling to see the video of how one man edited his fiance's favorite Disney film in order to create her very own fairytale... I can guarantee, this one will make you cry.

Who doesn't want to find their "happily ever after?"

I mean, the idea of finding your other half has been part of society for as long as time even existed.

It stems all the way back to the Greek era.

Have you heard of Plato's Other Half? No? Well, I bet you can figure out what the overall meaning behind it is just from the name of the theory.

"Each of us, then, is a 'matching half' of a human whole, because each was sliced like a flatfish, two out of one, and each of us is always seeking the half that matches him. That's why a man who is split from the double sort (which used to be called 'androgynous') runs after women." But you can take your fancy really.

However, this story is especially for Disney lovers.

We all grew up watching the classics where Disney princesses managed to find their Knight in Shining Armor, right? Well, this video is the real deal.

And it's gone viral!

Everyone's talking about it right now.

The reaction has been the same for every girl.

I bet it was difficult typing up their reactions because of the tears blurring their vision.

And every guy is worried about how they can step up their game.

Get your thinking caps on, boys!

This one girl got her perfect fairytale...

And her soon-to-be-husband executed everything perfectly.

A film director with a plan to woo the girl of his dreams.

He took her to watch a showing of her favorite Disney film.

But little did she know what he had up his sleeve. Lee had spent the past 6 months with Kayla Coombs in order to get the video clip perfect.

So the mission to propose started a while back...

But the day they went to the movie theatre, the nerves really kicked in.

They sat down and the film started...

Lee knew what was coming, but his girlfriend, Sthuthi David was as clueless as ever. She thought they were here to just watch Sleeping Beauty.

As the film got to the crucial scene, Sthuthi noticed something was a little off.

The prince had arrived to give Aurora the kiss of life, but weirdly enough, the animated characters didn't look the same anymore.

As you can see, she looked confused...

"This is not the original one... Wait a minute!"

At one point she even expresses her confusion to her soon-to-be-husband but soon, her confusion turned into surprise as she realized the animation resembled her and her boyfriend.

And after that, it all started to make sense...

As the prince on the screen kissed the princess, she woke up and smiled at him. He then reached into his pocket and pulled out a ring...

But this is probably the best part...

The animation turns towards the audience watching and throws the box towards Lee who stands up to catch it.

He turns towards Sthuthi and gets down on his knee.

She's so surprised that she doesn't even realize that the audience around her is made up of her friends and family who Lee invited so that they could be there to share the special moment.

It was truly perfect!

And of course, Sthuthi said yes! Ugh, we love a happy ending!

Here's a look at the video:

If you're in the mood to see another cute proposal idea, then keep scrolling...