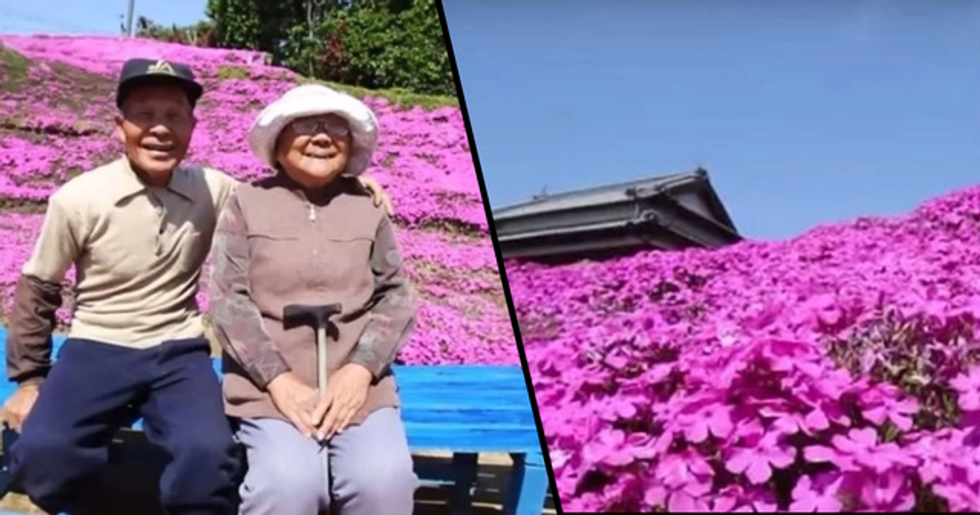 An elderly couple in Japan have put all other romantic stories to shame.

Mr. and Mrs. Kuroki have enjoyed a long and happy marriage in rural Japan, but disaster struck in more recent years when Mrs. Kuroki suddenly lost her sight due to complications from diabetes.

Keep scrolling to read more on this heartwarming story...

However, not all marriages stick strictly to their vows...

And it is quite unusual in today's day and age for a married couple to stay together longer than a decade.

Mr. and Mrs. Kuroki, both from Japan, have been happily married for sixty-three years.

They are both big lovers of the outdoors...

Shortly after their marriage in 1956, the couple moved onto a dairy farm where they raised 2 children together, and still remain to this very day.

However, in more recent years, life hasn't been so easy for the Kurokis.

After suffering from complications due to diabetes, Mrs. Kuroki tragically lost her sight.

Losing her sight took its toll on Mrs. Kuroki...

And she subsequently slipped into a deep depression, becoming withdrawn and seldom leaving the house.

Mr. Kuroki was initially at a loss at how to cheer up his wife...

But he didn't give up and eventually thought of an ingenious way to get his wife back to the outdoors.

He decided to grow a flower garden...

As he believed that the smell of the flowers would cheer up his wife, and encourage her to spend more time outside in the garden.

Mr. Kuroki has tirelessly planted thousands of flowers in their garden, all in a bid to cheer up his wife.

Slowly, Mrs. Kuroki began emerging from the house to enjoy the garden...

And now she smiles every day while she enjoys the scent from her husband's flowers.

And the Kuroki farm has even become somewhat of a tourist attraction...

As people from all over the world come to visit Mr. Kuroki's masterpiece, wanting to see and experience the love story themselves.

I don't know what is! In other romance news, keep scrolling for the story of the cutest, yet most dragged out engagement story of all time...