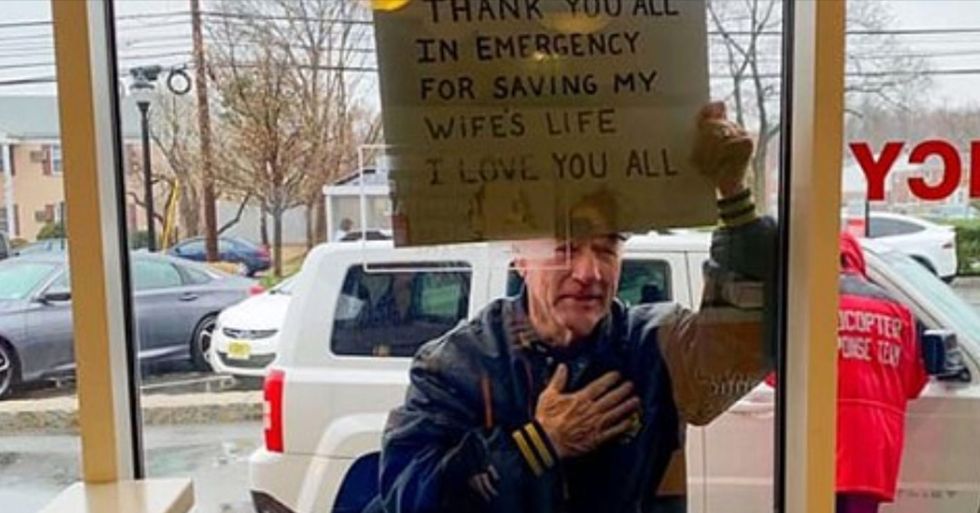 A man and his beautiful message of gratitude has gone viral this week after he stood outside of the hospital that saved his wife's life.

And, currently, there are 559,143 confirmed cases globally. A further 25,278 have tragically died from the virus.

So self-isolation has now been deemed as the most effective way of combating the virus.

And people have been urged to avoid any form of social interaction and contact as best they can.

Medical researchers have been working tirelessly to find a vaccine for the virus.

But with minimal funds and a growing number 0f patients, they have so far had no luck.

Our doctors, nurses, and carers are amongst the hardest hit in the pandemic.

Healthcare workers have been forced to work around the clock to keep up with the number of growing coronavirus cases.

But they are struggling to stay afloat.

The hours worked by those in the healthcare sector are simply inhumane, and are leaving them physically and emotionally drained.

Shocking footage has been emerging of our overworked doctors and nurses...

Who are pulling shifts as long as forty-eight-hours in the fight against COVID-19.

Any little gesture of kindness or gratitude goes a long way.

People have been doing their best to make the jobs of our doctors and nurses a little easier...

Whether it be donating money to hospitals or delivering food and drink to the exhausted members of staff - Every little helps.

We have never before been so grateful for our healthcare workers...

And, yesterday, the entire United Kingdom came together to applaud their own doctors and nurses, who have been working around the clock to care for those infected with the virus.

The gestures have been coming in all different shapes and sizes...

But there has been one in particular that stands out amongst the rest.

It happened outside of a hospital in New Jersey.

Like other hospitals across the country, Morristown Medical Center has been much busier than usual, and the nurses and doctors have been forced to work lengthy shifts in order to keep up with the influx of patients.

And one man, whose wife had been treated at the hospital, wanted to express his gratitude to the doctors and nurses.

But, with the self-isolation restrictions still in place, he had to improvise.

Because he wasn't able to go into the hospital and thank the staff himself...

He decided to handmake his own sign that read a small message of thanks to the team who had saved his wife's life.

One of the nurses captured a photo of his gesture...

Where he can be seen clutching onto his sign which reads, "Thank you all in emergency for saving my wife's life. I love you all" with a warm smile, eyes full of tears, and a hand to his heart.

It is truly the most heartwarming photograph.

Allison Swendsen, who shared the photo, wrote: "In triage the other day, I heard a knock on the window... This was what I saw - This man knew he couldn’t come in but wanted to show some gratitude - I asked through the window if I could snap a picture and he nodded, he had tears pouring down his face."

Allison was able to ask how his wife was doing...

"I peeked out the door and asked him how his wife was - He said 'great, she is going home today, you are all amazing' I don't know him, I don't know his wife, but throughout the last thirteen years as a nurse, I realized, this is why we do it- times are tough but we make a difference. I love my team."

The man is yet to be identified...

And it is unclear as to whether his wife was suffering from coronavirus. But the post quickly went viral nonetheless and has since been shared over 30,000 times.

What a beautiful moment.

A beacon of light in an otherwise dark and turbulent world - Hang in there, everybody. For more on the coronavirus pandemic, keep scrolling...