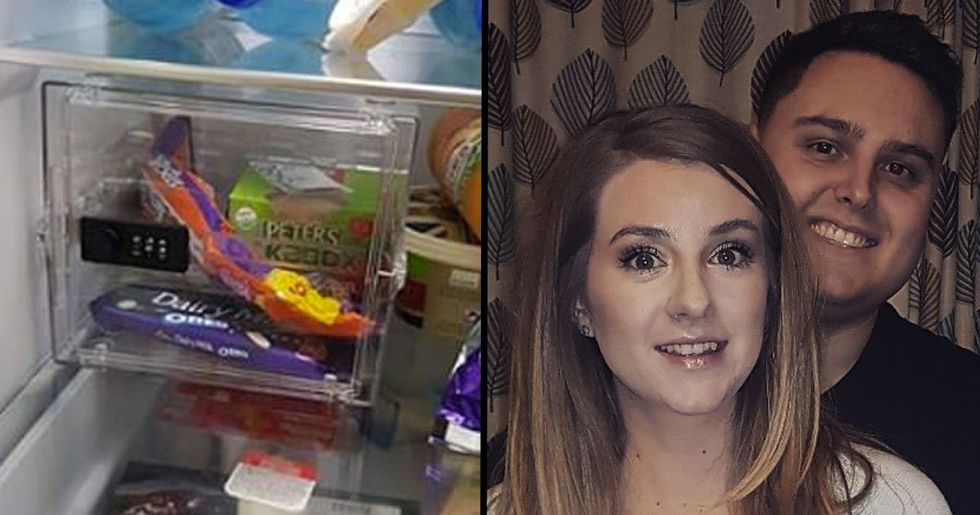 I mean, we can all understand the desire to keep a little bit of ourselves back from our respected partners. After all, space is good, right? Having your own drawers, a shelf for your books, your own mug... it's these little things that give us our "individuality", or at least a sense of it.

In reality, when ordinary people move in together there just isn't the money for separate sinks. Heck, you'll be lucky to get your own hand towel.

Unless you have the Beckhams level of success, you're just going to have to learn to share.

That's about as far as I can get in sympathizing with Dave Williams, the British dude who installed a "chocolate safe" in the fridge he shares with his fiancé.

Because frankly, I am not on his side.

Keep scrolling for this controversial story. You can decide for yourself whether you think this is perfectly acceptable behavior or not.

Sure, I think there are valid reasons to get a safe for your home.

Plenty of people get a safe box for their important documents. Like once you're an "actual adult" that's something you're supposed to do, right?

"Mom, have you seen my [insert possession here] I can't find it!"

I swear it's like some kind of parent superpower. If I ask my mom or dad where anything is, they just seem to know. From my passport to my toothbrush, my mom has always got it down. They're the kind of people that definitely have a safe for the important stuff.

Some things need to be put in a safe.

I don't have a gun... or a young kid for that matter, but if I had either of those things I'd probably get a safe.

Stacey and her partner, Dave, have a little daughter.

The young couple lives in the U.K so they probably don't have a gun, but with having a young child, safe-proofing their home was necessary.

But safety wasn't on Dave's mind when he installed this safe...

After Stacey shared the bizarre story on Facebook, the funny comments from random strangers flooded in. In the image of the couple sharing their pregnancy news, one user suggested that the expected newborn was not the only thing on Dave's mind. Frankly, I think I agree.

Stacey was shocked when she came home to discover the "chocolate safe."

Sharing her shock with the world on Facebook, the mother of one wrote, "So this is what it has come too! You buy a house together, have a child together, get engaged, are planning a wedding and doing your house up and this happens."

As if it couldn't get any worse...

Not only did Dave install this "chocolate safe" to keep his wife off "his stuff," but he filled it with all of Stacey's favorite chocs. And... in case you didn't notice, this safe is see-through so Stacey can see exactly what she's missing. Brutal.

Dave insists he was tired of Stacey eating his chocolate.

Now, I hope this isn't some weird power-play and he's the kind of dude that's like "my wife will not eat chocolate"...but when they share everything else, why can't he accept she might eat the chocolate that's in the fridge? I am one hundred percent with the Twitter user, Steph, on this one... It is so hard not to eat loads of chocolate every day.

The Twitter user, Jack Grimes makes the very valid point that White Lion bars are the best chocolate bars known to man. I could eat them for every meal, every day. Saying that I think white Snicker bars are really good too. This reminds me of the fact that my little sister actually ate the last Snickers bar from my fridge last night. But you know what I'm not gonna do?  Install goddam " chocolate safe."

I mean, I don't know if these a God-fearing people but I can't help thinking, WWJD?

I'm a bit of a lapsed Christian myself, this story has really brought out my catholic morales. I was brought up to believe that sharing meant caring. Clearly Dave was taught something else. Did he ever get taught the story of how Jesus split the loaves and bread a fish between a crowd of thousands? I'm not saying Dave has to buy thousands of choccy bars but for the price of the safe, he probably could have just bought enough choc for him and his beloved.

Dave seems to have taken lessons off Joey Tribbianni.

It's true that plenty of people watched the hit television show Friends and thought: "huh, so this is what it's like to be a functioning adult in your twenties..." Those people are fools!

Do you really want to be like this guy?

If you've ever had the pleasure of watching an episode of Friends without the overdubbed audience laughter, it's actually pretty intense. I mean, look at the above gif of Matt Le Blanc's character Joey screaming into the face of Lisa Kudrow's Phoebe. His rather aggressive assertion that he "doesn't share food" does not have the funny edge I remember from when I first watched it. Tribianni's anger doesn't seem called for at all, and he comes across as neurotic and selfish.

Does this look neurotic to you?

Maybe Dave meant it as a joke... Maybe in jest, he had "threatened" his fiancee that if she didn't stop eating "his" chocolate he'd have to put a lock on it. You can imagine it can't you? Couples all around the world probably have a similar conversation. But you know what people don't do? Go and actually buy a goddam fridge safe for their chocolate.

I mean this dude literally gave his lover the floating bit of wood that might have saved his life... And then you've got Dave, who can't even share a choccy bar!

Blake Lively has been a big advocate for the happiness of eating chocolate.

Whatever Dave's motives were for locking away the chocolate, he clearly wasn't thinking about keeping his lady happy. In an interview with French Vogue, the Gossip Girl actress stated: "I can't start my day off without a mug of hot chocolate or finishing off the day with a few squares of dark chocolate... It keeps me feeling happy." So if it's good enough for Blake, why is Stacey being shut out of chocolate happiness?

I bet Ryan Reynolds doesn't lock up his chocolate to prevent Blake from getting her hands on it.

Ryan Reynolds might look a bit dim but I bet you he knows that it would not be a smart move to start loading his fridge with safes to keep Blake Lively from getting hold of his favorite bars of chocolate. That is not how you keep a wife happy!

The safe Dave purchased was a "lockabox".

The father-of-one purchased the "lockabox" on Amazon. Going on Amazon myself to imagine how this all escalated, I noticed that the company makes some very rational suggestions of why you might need their product. Like I don't know... keeping medication away from children.

"Oh all the nice things have been locked away... guess I'll eat this apple."

I think the above image must have been what persuaded Dave to purchase the safe.  Like a consumer sucker, you can imagine him looking at this picture and thinking, "huh, if I lock away all the chocolate my fiancee will just shrug and take an apple instead."

But, Stacey was not about to let Dave get away with these antics.

Shaming her fiancé on Facebook, Stacey wrote, " Dave goes and buys a f*ck*n fridge safe because he's a *rs*h*le and doesn't want to share his chocolate with me anymore! Anyone want him? Surely this is breakup material right?! Pr*ck!" Oooh, she does not sound like a happy bunny.

I think it's safe to say that Dave is in the doghouse.

Stacey's post has now garnered over 100k comments and 50k likes. So everyone from the couple's closest friends, Dave's mom, to some random dude in Australia, now knows about his selfish act. What d'you reckon, is that punishment enough?

Some people are probably on Dave's side.

I'm sure there's some of you out there that actually think Dave is a genius and that getting a fridge safe would be really neat. So, for you guys... click this link and you can buy a safe just like the one Dave got. No judging! I'm sure you have a perfectly valid reason for wanting to keep chocolate away from your girlfriend... I'm not saying that Dave and Stacey are going to break-up over this but if you do want to read about the most devastating celebrity breakups of all time, keep scrolling...