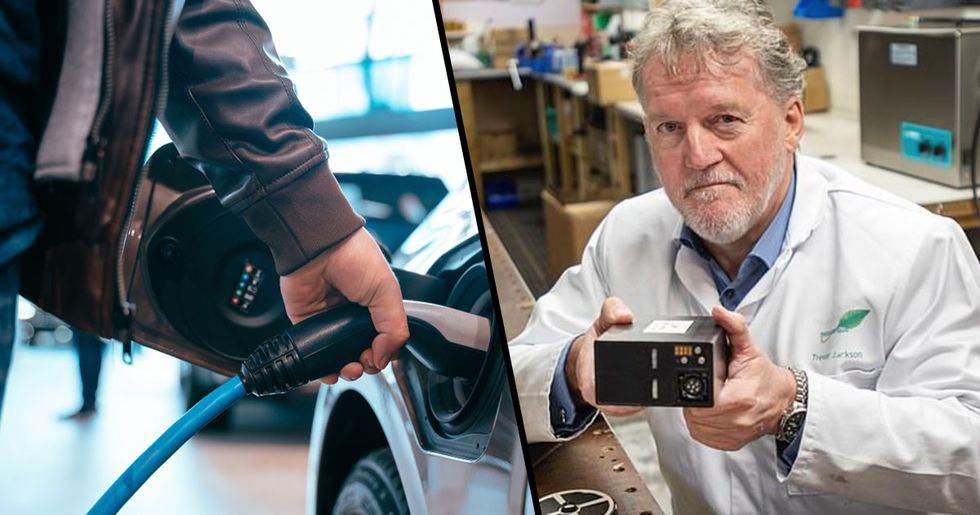 Man Invents Electric Car Battery That Can Travel 1,500 Miles Without Being Recharged

It's no secret that the climate is in crisis. But as we try to take steps to save the earth before it's too late, it seems as though we're constantly hit with bumps in the road. One massive problem we're facing is that of transport. Trying to get from A to B without burning fossil fuels seems to be necessary in order to protect our planet - but it's also something that's notoriously difficult to achieve. Until now.

One man from Devon in the UK has managed to invent a car battery that holds far more charge than any invented before. An invention that sounds like science-fiction has been proven to be effective - and it could be on the market as early as next year!

It's no secret the earth is in trouble.

The fact that we seem to be heading for a global crisis has (understandably) been dominating the news of late.

And there's one major contributor.

Trying to figure out how to solve the problem of transport while still managing to look after our earth is something that has long stumped environmentalists.

There are electric cars.

But they have been plagued with issues, needing near-constant charging, and once they break down they can't be recycled.

And solving the transport issue seemed to be one of the major issues in terms of combatting the climate crisis.

Because the latest advancement in electric car technology could solve the transport problem once and for all.

And he's the brains behind the latest innovation that many think will massively change the transport industry, forever.

He's come up with a new car battery unlike any ever seen before.

It promises to last for one thousand five hundred miles, making it far, far longer lasting than any model currently on the market.

And the industry is paying attention.

Engineering firm Austin Electric has signed a multi-million dollar deal with Jackson, and have already started putting the battery into production.

"It can help trigger the next industrial revolution. The advantages over traditional electric vehicle batteries are enormous," he said.

And they're backing the innovation.

They claim they want to release thousands of prototypes within the very next year - meaning huge environmental change could be coming way sooner than we think.

Jackson claims he has faced a lot of opposition.

He believes the automobile industry has taken a dislike to his invention and are trying to stop him at any opportunity.

And Jackson has even faced slander from critics, claiming the benefits of his invention have been over-exaggerated.

The technology has been around for a while.

It has even been reported on in the past - but trying to make the industry pay attention has been a struggle for Jackson.

But only now is the invention gaining the traction it deserves.

Jackson says," It has been a tough battle but I'm finally making progress. From every logical standpoint, this is the way to go."

He's been in the transport industry for years.

Jackson has worked for automobile giant Rolls Royce, alongside working for the British Navy before setting up his own business in 1999.

The battery is made of aluminum.

Aluminum dipped in an electrolyte can cause a chemical reaction which creates electricity.

But there's a problem with this process.

The electrolyte needed is both poisonous and caustic, meaning it couldn't be used for commercial batteries. But Jackson has discovered a better way.

He's discovered a new formula for the electrolyte which is far safer.

"I've drunk it when demonstrating it to investors, so I can attest to the fact that it's harmless," he says.

He can even use scrap aluminum for the job.

By filling an old drink can with electrolyte, he can start a propellor and keep it spinning for hours. This is essentially what the car battery does on a much bigger scale.

Jackson hopes the battery will be implanted into already existing cars.

The procedure will cost around $5,000, and should be available as early as next year. For more climate change news, keep scrolling for the story of one climate change protestor who messed with the wrong man.