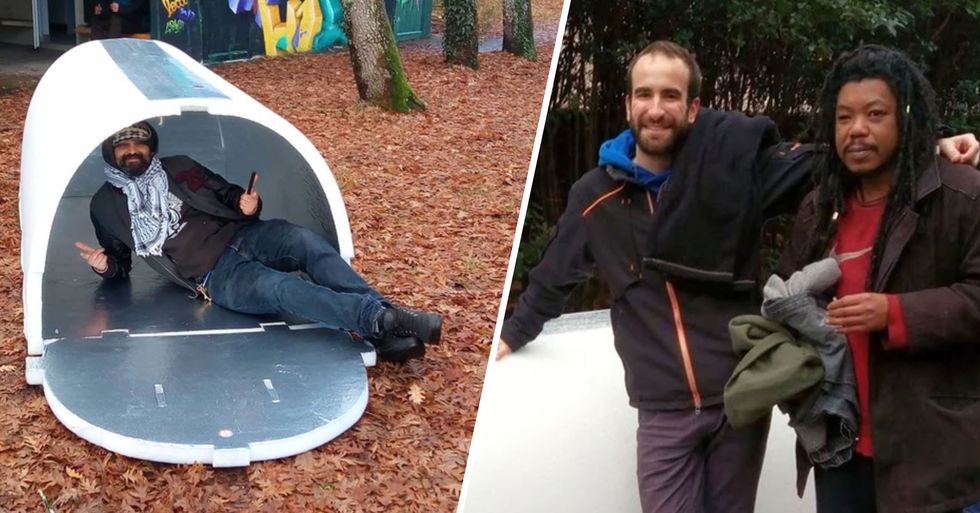 Homelessness is on the rise, even though unemployment rates are slowly declining. And the world seems to be involved in a constant debate about what we should be doing in order to help the issue. While some believe that homelessness and laziness have a direct correlation, others take a more empathetic approach, understanding the fact that some people may just not be as fortunate as us.

No one wants to be homeless.

But there are many people who want to help the homeless, and some have come with more creative ways to do this...

And don't even get us started on owning your own home.

Judging by the rate of inflation, the younger generation won't be able to own their own home in their lifetime.

According to the U.S. Department of Housing and Urban Development's Annual Homeless Assessment Report, in 2018, on a given night, there were over 553,000 homeless people in the United States. And that was only on that one night.

Countries around the globe are divided on how to deal with the issue effectively.

However, these reports also disclose that twenty percent of the world's population lacks adequate housing.

And it's easy to brand them as lazy or idle, but when the current job sector is already overflowing with candidates, it becomes a more difficult task trying to get on the ladder.

But, sometimes, all that the homeless need is a chance.

Recently, The Independent revealed that food giant, Pret a Manger, was planning to give jobs to the homeless.

The project was established so that homeless people could afford their own property...

And this property would also be provided by the company. According to the news outlet, this is what they aimed to do: "As well as being given jobs in Pret stores nearby, they will also receive advice on how to get a bank account, save for a deposit and develop their wider literacy and computer skills."

Rather than marginalizing the homeless, Little Rock has taken it upon themselves to give the homeless jobs cleaning up the streets of the city.

The pay was 9.25 dollars per hour, which is more than minimum wage!

The "Bridge to Work" project started all the way back in April 2019...

It was initially only supposed to last for six months, but now the mayor, Frank Scott Jr, has decided to extend that period because he was so impressed by the results.

The scheme was funded by the Canvas Community Church.

They spent 80,000 dollars on making sure that they give a chance to those in society who needed it most.

But others have come up with more creative ways to help.

And it seems that one man has come up with an invention of his own to help those living on the streets.

A few years back, after working abroad, Geoffroy returned to Paris and was stunned by the number of homeless people in the city.

So, he decided to take action.

After realizing how hard it is to find somewhere to stay for the night, Geoffrey racked his brains for a solution that would help those who have no choice but to sleep on the streets.

That's when he had his lightbulb moment.

Geoffrey managed to come up with a shelter that was made from light, inexpensive, and warm materials.

The shelter was created with Georffery's own money...

As well as a huge crowdfunding campaign that raised a whopping $20,000.

The insulated shelter is portable and waterproof, with the inside reaching over 50°F higher than the outside temperature.

It's important to note that Geoffery recognizes that the Iglou is far from a solution to the homeless crisis...

But they'll provide a temporary solution that'll certainly make many people's lives on the streets that little bit easier.

Geoffery has big plans for the future.

And wants to create hundreds, if not thousands of the Iglous as well as making improvements to the design such as adding wheels. If you want to support the igloo shelter project, you can visit the official site or the Facebook group. This isn't the only way that people are trying to help the homeless. Keep scrolling to learn about how one car park was transformed into a safe haven...