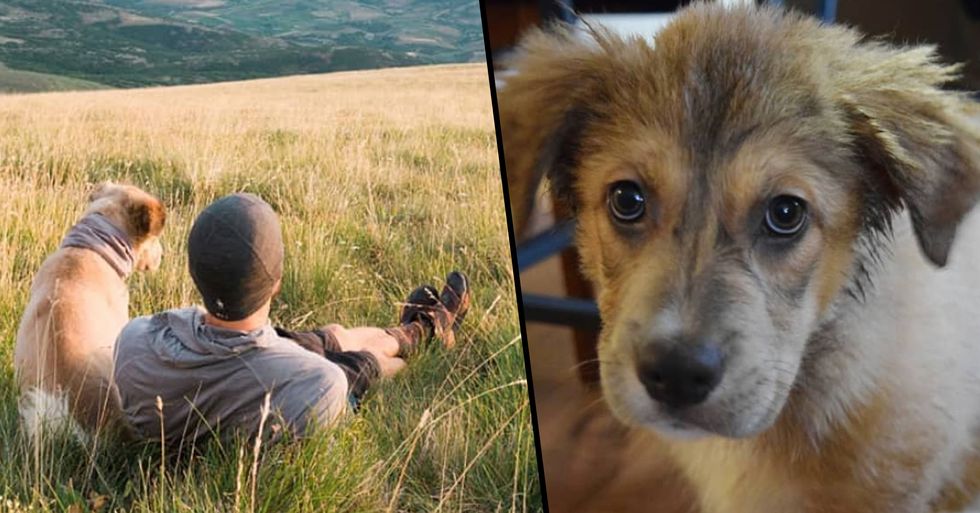 A man who has been on a 4-year adventure walking around the world has been accompanied by a stray dog for the entire journey, and it is truly heartwarming.

Keep scrolling to learn their story...

A dog is  a man's best friend.

Once you have a dog, they're always by your side.

Many people say that they are the most loyal companion to have.

A friend for the elderly to help prevent loneliness...

A service dog to help those who are visually impaired.

Or just a family pooch...

Dogs help people in so many ways.

Having a dog is actually beneficial to our health...

Studies have proven that owning a dog improves fitness, overall health, and mental health. Now, who wouldn't want that?

It is equally as beneficial to dogs being in a family home...

And a dog is at its happiest when surrounded by its own little pack. But sadly, this isn't a reality for all dogs.

There are way too many stray dogs out living on the street...

And this is no life for a dog.

And that's all thanks to Tom Turchich.

Tom began traveling alone back in 2015 following the loss of a close friend...

He vowed to walk across the entire world from his home in New Jersey, and he has completed a hell of a lot since.

And he has since walked 16,500 miles across thirty-seven countries in 6 continents. Incredible.

But back in 2015 when he was passing through Austin, Texas...

He came across a stray dog who took an instant liking to him. He decided to name her Savannah, and she has followed him on his journey ever since.

The pair have become inseparable...

Their relationship wasn't always strong, however.

Tom said in an interview, "The relationship between Savannah and I has evolved over the years. When I adopted her in Austin, Texas, I actually didn't feel much towards her."

Tom wasn't thinking of the long term when he took on Savannah...

"I was hoping she would provide some protection, but after crossing Mexico together, which was a whirlwind for me and basically where Savannah grew up, I realized how much she meant to me," he explained.

Savannah has been with Tom through every step of the way.

"Now, after having walked for four years together, having faced nearly every challenge imaginable, my feelings for Savannah have evolved beyond even love and admiration, what I feel for her now is more akin to pride and respect."

The pair have experienced so much together.

"I have a deep sense of respect for her because I've been right there with through it all. The challenges Sav and I face vary country to country," he explained. "In places like Costa Rica, it was adjusting to the sweltering heat and humidity in the jungle, whereas next year crossing Kazakhstan the challenge will be carefully planning that we have enough water and food crossing the desert between towns."

Tom and Savannah aren't too far from reaching their original goal...

But thanks to the global pandemic, their plans have come to an abrupt halt.

They are currently held up in Azerbaijan as they trek across Asia.

"I thought I had things timed out pretty well that I could reach the capital of Mongolia before winter set in there, but with the month delay that's seeming unlikely," Tom explained. "Either way I'll push as far east as I can this year, heading into Kazakhstan, Uzbekistan, Kyrgyzstan, Kazakhstan again then Mongolia."

Home time is on the horizon...

"After that, we'll walk Australia then return home for a 6-month walk across the US from California to my home in NJ."

We wish Tom and Savannah the best of luck with the rest of their travels!

Make sure to keep scrolling to read about the 80-year-old man who has built a "dog train" to take stray dogs on adventures...