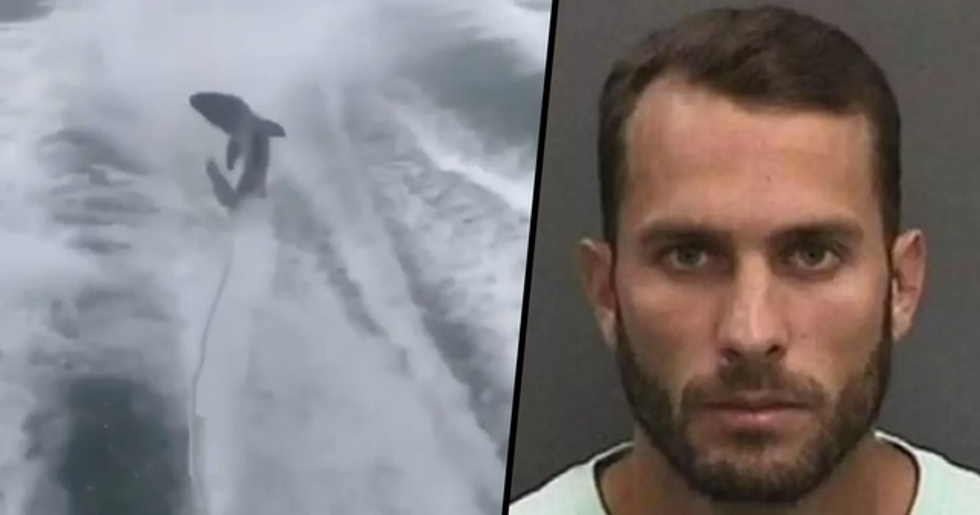 In the most recent update on why humanity is completely doomed, a man has been filmed torturing a shark by dragging it along behind a boat until it was killed. I don't want to be a part of this race, anymore.

Robert Benac III, from Florida, was filmed back in July 2017 when he tied a shark by its tail to the back of a boat and proceeded to drag the innocent creature at alarmingly high speeds until it was eventually torn to shreds by the force of the water.

The video quickly went viral, disgusting and outraging people all over the world. And, now, people are even more outraged after finding out that Benac has been sentenced only 10 days in jail. 10 days.

Keep scrolling to read the full story, and to hear about the rest of his underwhelming punishment.

It's common knowledge now that shark populations have been declining steadily around the world for decades. It feels like nearly every week, shocking new reports and figures are coming in about the worrying fate of the ocean-dwelling creatures.

And, like most of the devastating effects on our planet, we are to thank for it.

Millions of sharks have been hunted and slaughtered over the years, and it's all down to our somewhat irrational fear of the creatures. We humans have long had the misconception that sharks are blood-thirsty killing machines, with many of us believing that they will devour anyone who dares swim in their waters at the first chance.

But this couldn't be further from the truth.

Sharks are actually peaceful creatures that very rarely attack humans... And, even less frequently, eat us. Considering that sharks evolved millions of years before humans ever walked the Earth (or swam in the oceans…), we are not a part of their typical diet, with them preferring to hunt sea lions, seals, smaller whales, and turtles.

Though they can still pack in a big bite...

Sharks have only been known to attack humans when they have confused us for prey such as seals or other large fish, or are simply curious.

To put it simply, sharks aren't the main danger here.

Statistics show that there were only thirty-two confirmed cases of shark attacks in the United States last year and only one fatality.

The 1975 blockbuster, Jaws, spurred the negative stigma around sharks.

Following the release of the movie, a shark-hunting frenzy began, with people mercilessly killing the unfortunate creatures after watching their dramatized version on the big screen.

And as a result of this new-found terror, millions of innocent sharks have been hunted and killed.

Though sharks killed only 4 people, humans killed about 100 million sharks last year. Most are killed by commercial fishermen for their fins and flesh.

Both recreational and commercial shark fishing is legal here in the U.S.

Sharks are hunted for their meat, their fins, their skin, and various different oils. They are also used for their cartilage, as it is believed various medicines and treatments can be made from it - Though there is yet to be any scientific evidence to support this belief.

Though shark hunting is devastating to see...

Professional shark fishers argue that they kill the creatures in the most humane ways possible.

However, this isn't always the case.

Sadly, there are some people out there who relish in the pain and suffering of innocent animals.

One man went viral a couple of years ago for his disgusting treatment of a shark he was hunting.

Robert Benac III, thirty, of Bradenton, and the son of Manattee County Commissioner Betsy Benac, was filmed in July 2017 torturing an innocent shark, which subsequently died a long and painful death.

Benac is clearly no stranger to animal cruelty...

In a post on Instagram, Benac has previously been seen forcing beer into the mouth of a recently-caught Atlantic Goliath Grouper. Disgusting,

And the footage of their captured shark is even more horrifying.

In the clip, in which you can hear the men laughing in the background, the shark is seen being dragged behind the boat at high speeds while violently hitting the waves.

You can see the full clip here.

Though be warned: The video contains scenes of animal cruelty and suffering which many may find upsetting.

The video sparked an online outcry.

Other anglers and animal rights activists alike were disgusted by the video, and even Florida Governor Rick Scott spoke out after it was posted on Instagram.

"It's sick. It's just today's society," he told the DailyMail.

3 men were subsequently arrested after the video went viral.

Benac, along with the ship's captain, Michael Wenzel, twenty-two, and Spencer Heintz, twenty-four, was arrested, though charges were dropped against Heintz after a lack of evidence against him.

However, the other 2 men were charged with animal cruelty.

They were fined $2,500 and ordered to perform 250 hours of community service at an animal shelter.

Benac was also stripped of his fishing license for 3 years in the settlement with the Florida Fish & Conservation Commission and other prosecuting agencies reports the Bradenton Herald.

But their jail sentences are simply laughable.

The pair have each been ordered to serve 10 days in jail. 10. Days. And they only need to be served over weekends too, just to make their sentences that little bit easier. The slack sentencing even prompted a number of protesters to arrive at the state attorney's office with a petition calling on harsher sentences for the men.

Benac accepted the deal just as he was about to go to trial on Thursday on a more severe felony charge of aggravated cruelty to animals...

And even his family don't think justice has been served.

Benac's father, also Robert, when reached out for a comment on his son's punishment, said that Benac was already serving his jail time.

"He'll be out Sunday evening," his father said, adding he was "disappointed" about his son's punishment. "This is not justice. Let's leave it at that."

Animal cruelty is no laughing matter.

And sentences for the disgusting individuals who harm animals and fish for fun need to be much longer and much harsher. One person who has been extremely vocal about his views on these type of people is Hawaiian actor, Jason Momoa. The much-loved celebrity recently spoke out about a disgusting video of fishermen cutting sharks fins off for fun, then throwing the bodies back into the water. Keep reading to hear his moving and emotional speech, which also comes with a brutal warning for the fishermen...