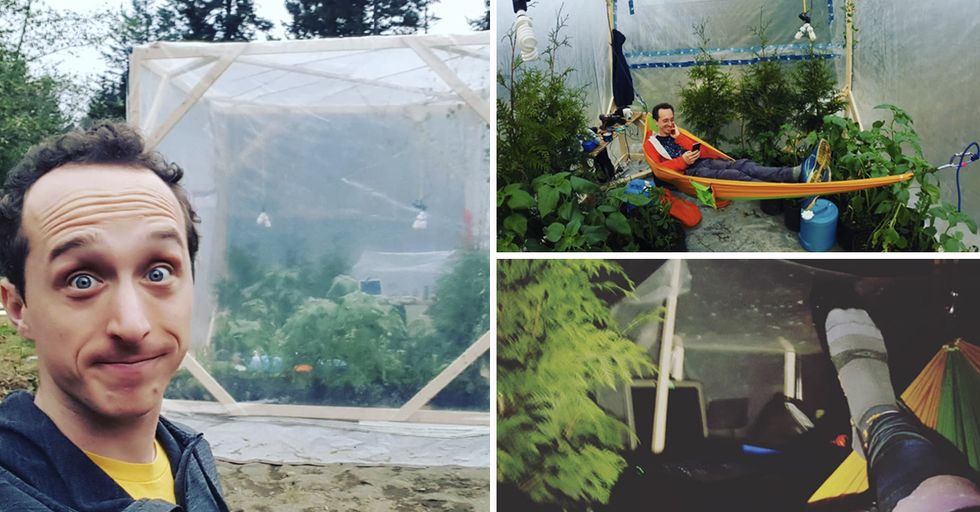 Have you ever wondered what it would be like to live in a man-made jar for three days? No, you haven't? Oh, well I guess it's just this guy then.

Kurtis Baute, a Canadian "whimsical scientist" wants to inform others about climate change and its potentially dangerous effects on our world. He put his life on the line by sealing himself inside a homemade greenhouse to see how long he could survive off of the oxygen provided by his new roommates (a whole lot of plants). This dangerous experiment

The responses that the young scientists received on Twitter were all over the place: is this guy crazy? Does he just really love plants? How does he use the restroom in the jar? Don't worry folks, we are about to learn a lot about our friend Kurtis, and even more about climate change. Science is pretty cool, and a little dangerous.

Who is this guy, this mad genius? Kurtis Baute is a Canadian YouTuber who loves science, the outdoors and cycling. He also has his Masters Degree in Environmental Science, so he's not just some crazy guy who loves plants.

The Next Bill Nye

Here is one of Kurtis' most viewed videos on his YouTube Channel. He's creative, intelligent, funny and a little crazy. But what good scientist isn't? Kurtis has some Bill Nye-like characteristics; he makes science interesting for common people like you and me.

He's also kind and doesn't push his agenda on others or people who disagree with his opinions. Kurtis is a nice guy, with good intentions and a huge obsession with science. He wants others to know more about science so they can care about what's going on in the world around them. We like Kurtis.

How it all started

At the end of August, Kurtis announced on his Instagram that he had a crazy idea: he was going to build a biodome, or a jar-like structure, that he planned on sealing himself inside of.

One user commented on Kurtis' actions, saying "This would be an embarrassing way to die bro. Just saying," along with other ignorant responses. Don't listen to the haters, Kurtis!

Okay, I've settled on a launch date for #KurtisInAJar: October 24th. Why? Because thats what works with the paramedic.
— Kurtis Baute (@Kurtis Baute)1539309707.0

Kurtis said in another video that he had been thinking about doing this experiment for about a year. Just recently he started tweeting about his big plan but finally chose a date. A lot of planning was involved, but a big factor was making sure he was safe. Yes, he did have to have a paramedic on site. This experiment could go bad, fast.

Kurtis also uploaded a video on his YouTube channel in order to explain his idea and show how he was building his jar.

"I think that people need to understand how the environment works on a deeper level," Kurtis said in his vlog, "and I think that if I can encapsulate a micro earth, a tiny little sample of that environment, maybe some people will get excited about it and learn some things about it."

His end goal? "If all goes well, the plants are going to produce oxygen that I can breathe," Kurtis predicted. "I'm going to breathe out carbon dioxide that they are going to take in and use to grow, and hopefully, we both survive." Optimism is key.

So how big is this jar that Kurtis will be living in for three days? It's about 1,000 cubic feet total.

If you don't know how small that is, then you need to watch his Youtube videos. Believe me, it's pretty, flipping tiny. If you are afraid of small places, you might not want to try this at home.

Some people thought he was crazy or this might be too dangerous, but Kurtis didn't care. "I think the environment is super important," Kurtis said in one of his YouTube videos, "and I'm willing to put a lot of myself on the line for that."

Prepped and pumped up

Kurtis predicted as much as he could about what he was getting into, regarding temperatures and possible outcomes of his jar experiment. P.S. 30 degrees Celsius is about 86 degrees Fahrenheit. Remember, Kurtis lives in Canada. It's a little different up north.

Kurtis was counting down the days until his experiment would go live, and he even started his own hashtag to keep others following along: #KurtisInAJar

Yes, Kurtis even thought of the necessities. He set up WiFi in his jar so he could live tweet, vlog and do a couple of podcast interviews. He thought of everything. Maybe living in a jar wouldn't be so bad, if you had WiFi or Netflix.

For all those doubters and haters, Kurtis was ready to show them up by sealing himself in.

You can't do a crazy experiment without Facebook notifying you to reflect on your past and remind you of where you came from, even if that means showing you a super embarrassing photo you were trying to forget from years ago.

You never know what could happen, so he had to handle his most personal and prized possessions: his rock collection, his robotic cactus and of course, his telescope. Again, we love Kurtis.

Kurtis spent his first night in the jar and slept in a hammock. Not sure if that's comfortable but I guess there isn't enough room for a bed.

Kurtis' updates included his sleeping patterns but mostly focused on the carbon dioxide levels and his blood oxygen percentage. A normal reading for blood oxygen is anywhere between 95 to 100% according to Healthline. So far, so good.

Kurtis points out that this experiment isn't much different, in regards to air quality, of how people live around the world. He thinks everyone deserves clean air, but not everyone on this planet has it.

Kurtis gets straight to business by declaring that climate change is real and that we are to blame, but so many people are either misinformed or entirely uneducated on the subject.

He goes into a lengthy thread on Twitter giving us some tips about how to slow climate change and how we can make a difference right now.

His tips included eating less meat, driving less and simply starting more conversations about climate change. "Let's be real," Kurtis tweeted, "and encourage each other to do better."

@DominicWalliman The question is: will I make it to three days? I really don't know. CO2 levels might wipe me out by then. Sound familiar?
— Kurtis Baute (@Kurtis Baute)1540333319.0

As he sits in his jar, he knows it is dangerous and can get dicey if levels start to change for the worse.

Some of his Twitter followers were quite worried about this experiment because of the health factors. Kurtis is at risk of getting carbon dioxide poisoning, which can lead to serious tissue damage or even death. The concern is justified since Kurtis' life is at risk.

If Kurtis doesn't closely watch the oxygen meter, he could be in danger, and his followers know it.

In case of emergency

Kurtis reassures the people by telling them he has his emergency plans all set, with alarms, sensors and a paramedic. Just in case.

Living on the edge

Anyone else feeling a little anxious? Our guy Kurtis feels pretty chill about the fact that he could get seriously hurt if he stays in too long, but I guess he knows what's he's doing, and we have to trust him.

Some followers were pretty curious about where he used the restroom when it was time to go. A very valid question if you ask me.

There you have it, folks. Jar life isn't as glamorous as you may think.

The jar did get a little foggy, and the weather conditions had an impact on what went on inside the jar.

"Seeing how much the CO2 levels are rising in here just from my breath alone is INSANE," Kurtis said in another tweet. As CO2 levels rise, so does the risk of Kurtis getting carbon dioxide poisoning.

Kurtis kept a close eye on all levels inside his jar. The oxygen levels fluctuated frequently, but he always knew if it was going to be too dangerous for him to continue his experiment.

With the cloudy weather not allowing much sunlight into the jar, it was causing implications to Kurtis' living conditions and to the overall experiment. Kurtis knew if this kept up, he wouldn't last much longer.

Unfortunately, the CO2 levels got too high, and Kurtis was forced to end the experiment after 14 hours total in the jar. He had all of us holding our breath.

All safe. My goal here was/is to engage people about #climatechange, and seeing the response on twitter I feel like… https://t.co/Baf02TEMtj
— Kurtis Baute (@Kurtis Baute)1540417133.0

We can all breathe a little easier

Many were relieved to hear that he was okay, even if the experiment didn't go exactly as planned. People are also looking forward to the video Kurtis is promising to release soon including inside footage and his conclusions about what he learned. He tweeted that it would be uploaded on his Youtube channel soon.

People took to heart what Kurtis said during his experiment. This whole earth in a jar experiment had people talking, watching and adjusting their lifestyle habits in order to contribute to the cause.

Now you know the story of a man who put the Earth in a jar, lived inside of it and survived to tell the tale. This is a great story to share with any science geek or for those people who don't think climate change is real. Spread the knowledge with your friends!