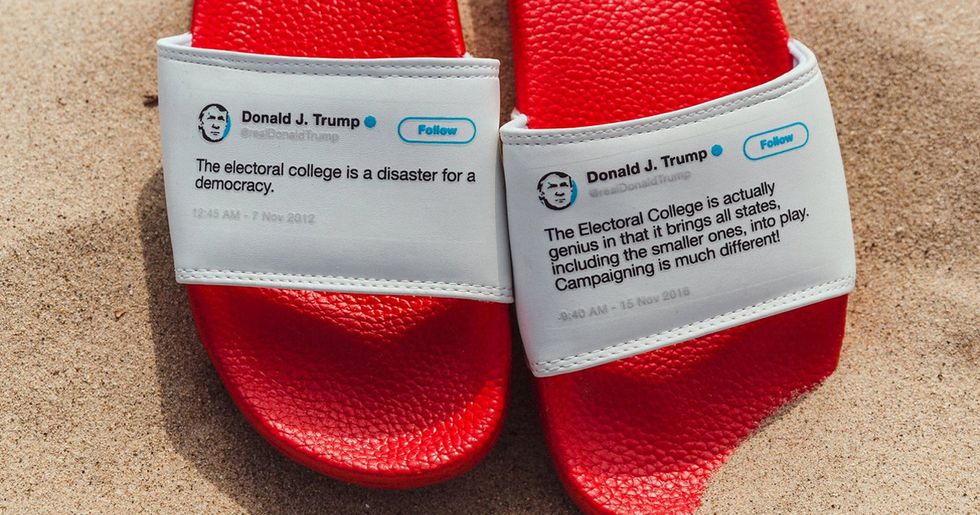 This Guy Made Flip Flops Out of Trump's Conflicting Tweets

All presidents have their flaws. For instance, Trump isn't exactly known for keeping his word. In fact, some people may say he is a world-famous flip-flopper.

You know who would definitely say that? The person who made flips-flops with Trump's tweets on them. And it kind of seems like a lot of people agreed with him, considering the shoes sold out pretty much immediately. (And once you see them, you'll probably agree it's not because they are extremely fashion-forward. They're basically just plain old rubber flip-flops. And not even really cute plain rubber flip-flops.)

So, why did these plain rubber flip-flops sell at the rate of a highly coveted Tickle Me Elmo circa 1996 or the extremely rare Peanut the Blue Elephant Beanie Baby, also circa 1996? Well, once you take a look at what is printed across these flip-flops, you'll get it.

Sometimes a product comes into our lives that people need so desperately, they are willing to pay whatever the price.

Just like me and seltzer water. Look, I know it's just regular water with bubbles, but I can and will give you $3.50 for a can of it if need be.

A man from LA has successfully tapped into this market.

With a product that he thought up on the fly.

Sam Morrison is an art director from LA.

But his latest project has been the most popular one, yet.

He noticed that a lot of what the president said was contradictory.

Morrison had the brilliant idea to take the President's contradicting tweets and make them into literal flip-flops.

Morrison dug deep into Trump's Twitter account to find tweets that were directly in contrast with each other.

Doing the Lord's work, truly! Who wants to dig that deep into Trump's Twitter?

He selected three sets of tweets and then handcrafted flip-flops featuring them.

Some people pointed out they are not technically flip-flops but slides, but like, you get the point.

They sold out basically right away.

Morrison only made 1000 pairs, mostly because he did them all by hand.

The flip-flops were kind of pricey.

At $30 a pair, they aren't priced like your average shower-shoe. But they were more like a one-of-a-kind piece of art than a product.

The flip-flops also had a catchy slogan.

"Going back on your word, one step at a time."

The shoes come in three designs.

One highlighted two different tweets about the Electoral College.

So which one is it, Donald?

When he wasn't president, Trump thought the Electoral College was a disaster. But somehow, when it helped him get elected, it was good? Weird that he'd change his mind that way!

The next set of flops highlighted two tweets about the media.

In one, Trump claims the media is dishonest unless they disclose sources. In another, he claims an anonymous source told him Obama's birth certificate was fake.

So, what he's saying is, we shouldn't trust his anonymous source?

To be fair, he probably didn't think someone would make flip-flops out of these.

The last pair talk about Syria.

He just can't make up his mind!

Unfortunately, if you love these flip-flops, you're out of luck.

Morrison says he doesn't plan on making any more.

It was a time-consuming task for him.

And he mostly did it for fun.

He even sent each package out by hand.

He spent no money marketing them.

They basically just sold themselves.

Not only did they sell out, his product sold out in under a month.

People are still commenting on his Instagram asking him to bring them back.

Looking on the bright side.

Sadly, you can't get the flip-flops anymore.

But, if you are in the market for funny Trump products, there is no shortage of that.

How about this Trump toilet brush?

Or you could get this terrifying sequin pillow of Trump's face.

But why would you? Also on Etsy.

Turn the sequins back the other way for the love of all that is holy!

You could buy this Trump-scented candle.

Or even a Trump reusable menstrual pad.

If you so desire, you can get this on Etsy.

Or you could have this cotton candy of Trump's hair.

Not exactly sure if this is pro-Trump or anti-Trump, but who doesn't want cotton candy?

So yeah, you can't have the flip-flops.

But at least there are options.