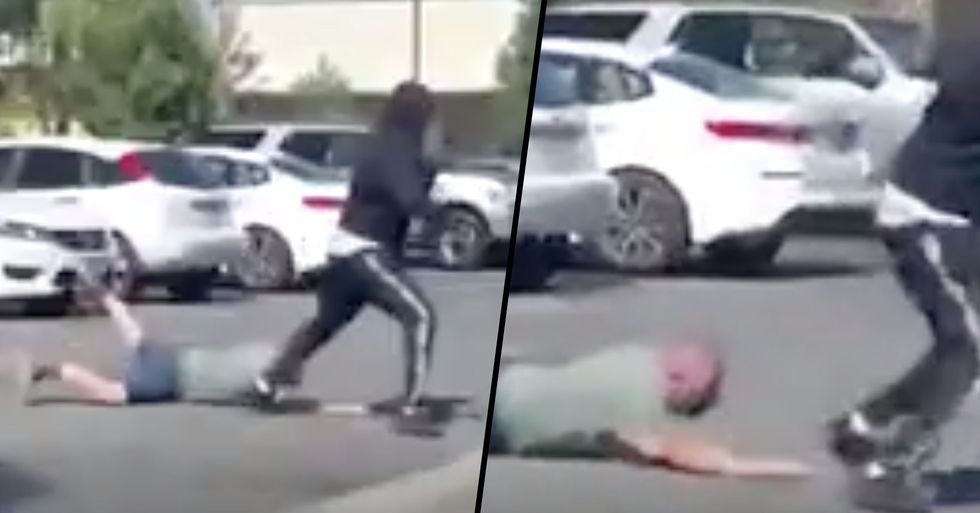 A man has been left penniless after he was robbed of his six-figure life savings just seconds after withdrawing from his bank.

The whole thing was caught on camera, and it's a shocking watch...

We all know how it feels to invest money into something.

It can take weeks or even months of saving every dollar you can in order to finally purchase whatever it is that you need.

Saving money is no easy feat, either.

It requires discipline, let's be honest.

It can take a long time to get to your goal.

Which is why it feels so rewarding when you finally get there, no matter the amount you've saved.

A story that's both shocking and heartbreaking has emerged this week.

Footage surfaced of the horrifying moment a man is mugged, seconds after withdrawing his life savings from his bank.

And made the trip to Chase Bank in Huntington Park, California, to withdraw the money he had made.

But, what should have been a happy moment...

Quickly turned into a nightmare when he left the bank.

Just seconds after walking out of his bank...

Before he could even get to his car, Francisco was brutally attacked.

He was forced to the ground by the thief in the parking lot...

Video footage from the scene shows the thief, who is dressed in all black, attacking him.

Francisco tried his best to cling onto the bag with the money in.

"And when he was being beaten he was doing his best to try and retain the bag that he brought with him," Francisco's lawyer, Nathan Soleimani explained. "He was literally fighting for his life savings."

The thief had been watching Francisco before striking...

"He was parked as closely as possible to the bank, knowing he was going to withdraw a large amount of cash," Soleimani said.

The video shows the suspect running away from the scene.

With Francisco left lying on the floor.

His injuries could have been much worse.

"Thank God he’s alive. His family is grateful he got out of it with just the injuries that he has," Soleimani said.

Footage from a newscast shows his arm in a sling as well as a serious of painful-looking bruises and scrapes.

The footage is an utterly shocking sight.

We can't imagine what he must be going through right now.

After the story reached social media, people have been warning others about withdrawing this kind of money.

And if you do, to have a police escort.

According to Soleimani, investigators are looking into surveillance video from the bank.

The FBI is also now involved in the case and a representative from Chase Bank said they are working with law enforcement.

Francisco has lost a huge sum of money.

In total, the thief stole $200,000 worth of life savings from Francisco.

Watch the shocking footage below:

Anyone with information related to the incident is being urged to call the Huntington Park Police Department. Footage also recently surfaced of the horrifying moment a reporter was mugged at knifepoint. Scroll on to read more and to watch the clip for yourself...