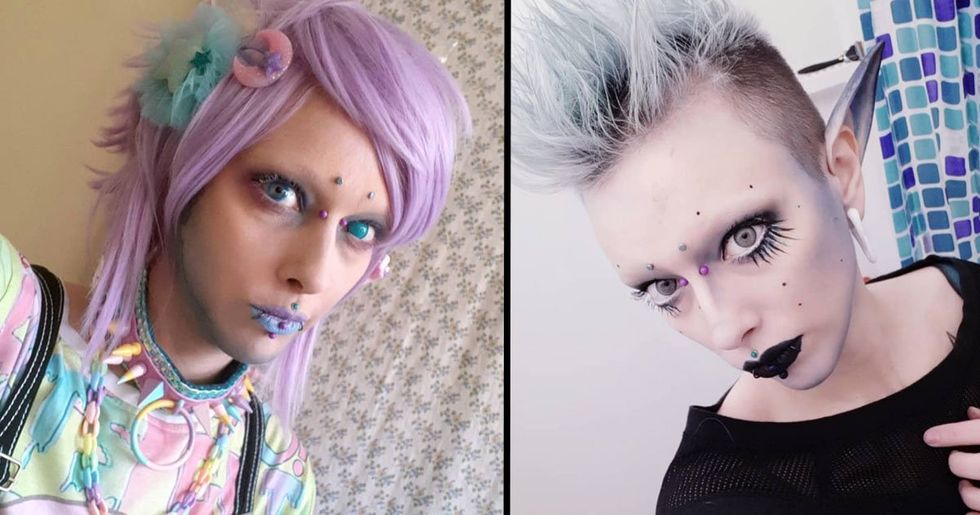 As gender stereotypes loosen up, it seems the concept itself is also getting redefined.

We have finally accepted that some people are not of the sex they were born with. Some don't have gender at all.

But it seems time has come to expand the gender umbrella.

After all, there are people who see themselves as aliens. For the most part of his life, Jareth Nebula was a female. At 29, he came out as a transsexual man. But unhappy with his new identity either, he realized that he has no gender at all. Instead, he's an alien.

Then there are people who believe they possess more elf characteristics than human. In fact, Kimberel Eventide sees herself not just as an elf, but a Pleiadian starseed too. She owns a wide collection of fake elf ears, dresses accordingly, and teaches others how to find their true elf selves.

According to Mirror, Jareth was born a woman, then transitioned to a man at 29. However, today he doesn't feel like he belongs on this planet at all.

Jareth never felt like himself. Not when he was a woman, not even when a man.

In fact, he believes he is an agender alien. To express his true identity, Jareth has had his nipples removed and regularly shaves his eyebrows.

Jareth gave himself the first name in honor of David Bowie's character in Labyrinth, and the surname that represents an outer-space cloud.

He's already tattooed seventy-eight stars on his body and is planning to increase this number to 333 because "three has always been [his] lucky number."

Jareth wants people to accept him for who he really is and prefers to be called "thing" or "it."

"After coming out as transgender and believing I had finally found myself, I realised I was wrong – I wasn’t male or female, or even human," Jareth remembers.

"I don’t think or feel like humans. I can’t really explain it to others – I’m simply otherworldly."

He adds, "I didn’t feel comfortable as either gender or even anything in between."

"I know I’m stuck in a human form and that’s how I’m perceived by others – but to me, I’m an alien with no gender."

Being diagnosed with Ehlers-Danlos syndrome only confirmed Jareth wasn't a regular human.

EDS is a long-term condition that causes the skin to be especially stretchy and joints more mobile.

People are born with the condition. However, Jareth hadn't been diagnosed until he turned twenty-six.

His doctors nicknamed him "Mr. Elastic."

Aside from the stretchy skin and hyper-mobile joints, EDS also causes intense chronic pain. One benefit of the condition is that Jareth looks much younger than he is because he's "wrinkle-free."

"The condition means I can pop my joints out on purpose, which was a fun party trick when I was a kid," he says.

"Now I realise why I could do that. My pain in my joints got worse as I got older and I would find it harder to move day to day."

"I get to a chiropractor once every two weeks and see a physical therapist once a week, as well as smoking medicinal marijuana for the pain – but there is currently no cure for EDS."

He also says it was at the time of the diagnosis that he realized he'd always felt completely different from other humans.

Even if he was a "hyper-feminine" female model in his teens.

At 29, Jareth came out as a man. He started dressing in more masculine clothes, taking testosterone injections, and eventually had his breast surgically removed.

Since he still didn't feel like he finally found his true identity, he continued to do research into alternative genders.

"I thought being a trans man would solve all of my issues and inner battles with finding out who I was," Jareth said. "But I wasn’t as happy as I expected to be."

"I felt like I was trying to fit into someone else’s box. I didn’t want to be constrained – that’s when I discovered what agender was."

"I’d always been obsessed with aliens, too, and what it means to be extraterrestrial, so the idea of being an agender alien fit perfectly as an identity for me."

An agender person does not identify with any one gender.

Agender people also don't want to look like males or females, however, they're happy to be called "he."

"I don’t have nipples, as I had them removed during my top trans surgery. I shave off my eyebrows and have lip, septum and nose bridge piercings."

Jareth is very happy with his new identity. Unfortunately, not everyone accepts that.

His family was very understanding of his transition from female to male.

However, they do not support him identifying as an alien.

"My family still see me as a trans man, because they don’t understand what agender or alien really means," Jareth said.

"I have online friends who support me but offline is harder. Not everyone understands – but that’s okay. I don’t expect them to get it, I only want acceptance."

Jareth has also received a lot of hate online.

"People treat me like a freak because I’m an alien, but it’s a completely valid thing to call yourself."

"Who is anyone to tell you who you can or can’t be? If someone wants to identify as anything, even an animal, let them."

"I feel sorry for people who attack me online. I think they lack empathy and just want to target me, so I deal with it pretty well by brushing it off." "I’m happy with who I am and will continue to become more alien-like every day."

Jareth isn’t the only one who’s breaking gender stereotypes.

Kimberel Eventide, 36, is from Illinois and identifies as an elf rather than a human. To express her true identity, Mirror says, she wears fake pointy elf ears and clothing inspired by Lord of the Rings.

Kimberel also sees herself as a “Pleiadian starseed – a person who has past memories and connections to other lives on other planets."

Before coming out as an elf, she had been a spiritual teacher for 8 years.

What's her everyday routine? "I dress as a High Elf as much as I can in velvet, silk, ornate detailed, or nature inspired clothing," Kimberel says.

"I have about five different types of elf ears and cuffs I wear, plus my own ears have a slight point to them so I don't always wear my ears."

Her friends and family were very supportive of her decision. Especially her husband. Kimberel says he's the Aragorn to her Arwen.

Although he identifies as a regular human and doesn't fully understand Kimberel's choice, he fully supports her.

Kimberel believes in "Oneness and that we are all from the Prime Source of the whole Universe that is the Universal Mind."

"But I think what really describes me best on earth now in this physical body is that I am a Pleiadian starseed."

"I am also known as an Otherkin, a person who identifies with something else besides being just a human."

"As many of you can already tell, our perceptions of being human is changing and expanding to include different genders, identities, and now Otherkins."

"I want humanity to grow up organically and move forwards into a brighter age of experience that lives peacefully with nature and has advanced technology for all to experience."

"This is my major mission, to guide humanity into the higher dimensions of both perception and experience."

"My friends are supportive of me as they all knew this is who I always was deep down inside."

"My personal journey has been a very exciting one and difficult at the same time."

"I have always wanted to help humans reach a higher potential within," she adds.

I guess, when you think about it, you can't really blame Kimberel and Jareth for not feeling like they belong to the human population.

Considering what’s happening in the world at the moment, what humans are doing to other humans, it makes sense that some of us feel misplaced.