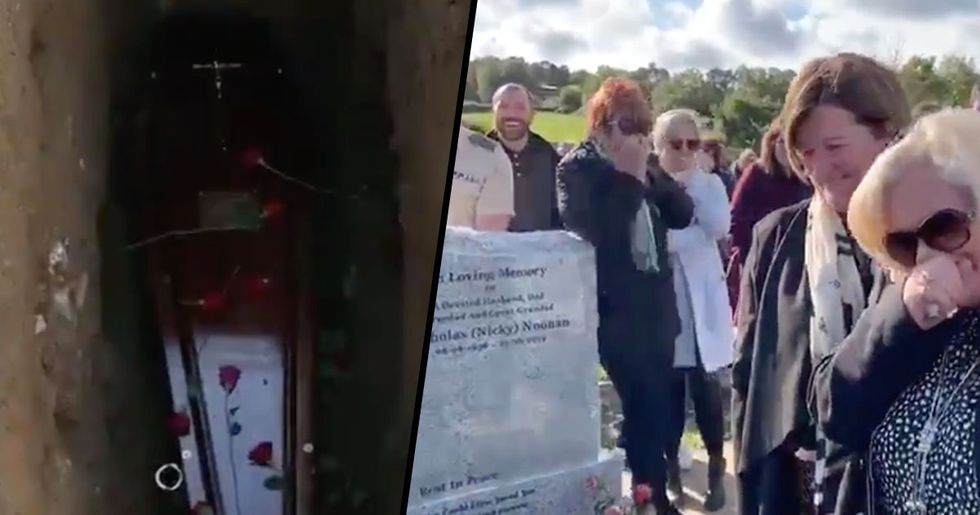 We all think about our funerals at some point or another. It sounds like a pretty morbid thing to do, doesn't it? But, for some reason, we all do it.  Maybe there's something comforting in thinking about how your funeral would pan out, perhaps it helps us accept death? I'm not too sure what the psychology behind it is, but I am aware most people have a song that they would like to be played - heck, some people probably have whole playlists prepared.

One dying man from Ireland gave his funeral some real thought. Not wanting his family and friends to be glum, he came up with a novel way to make everyone laugh.

A message from beyond the grave turned everyone's frowns upside down.

Continue scrolling to find out how, even in death, one joker managed to have everyone in hysterics.

For many, the burial is the hardest part.

Sitting in church, singing, reading verses, and hearing people talk fondly of the deceased can be comforting. There's no way to dance around the death at the burial site. Once the deceased is lowered into the ground, the reality of the situation hits home.

We can all joke about dying...

And we can tease about what we would want at our funeral, but, realistically, most people don't get to plan out their funeral.

Sure, we can make requests...

But that's not to say that anyone will take them seriously. I guess you can only hope that those closest to you know you well enough to get it right.

Tweeting this so I remember my mum has requested David guetta ft Kelly rowland as her funeral song
— keira (@keira)1570737510.0

We can also make requests and get someone to note them down in a bid to keep them from forgetting.

In reality, your funeral isn't about you...

It's about the people you leave behind. Really, it doesn't really matter what song you would have wanted to play or what clothes you would have wanted to be buried in... because, you know, you're dead (sorry). I guess the best you can hope for at your funeral is that everyone left behind is doing alright. I sure wouldn't anyone all torn up at my funeral.

After battling ill health, the husband and father from Dublin, Ireland, became aware that his days were numbered.

Some people want tears at their funeral.

In some countries, you can even hire "professional mourners" to come to your funeral and cry.

To die with mystery...

Forget dying with dignity, surely it would be cooler to die with a bit of mystery, no?

Mr. Bradley was not preoccupied with his favorite songs.

He wanted to ensure that his children, his grandchildren, his friends, and, most importantly, his wife would be able to crack a smile.

Shay's wife cried happy tears after she heard the recording that had been planned into the burial service.

Laughter is the best medicine.

Chose my mums funeral song today with my stepdad, we chose bat out of hell by meatloaf. Mum would be looking down pissing her pants ❤️
— gerry cleave (@gerry cleave)1570478888.0

When you lose a loved one, it can feel as though you will never have a good day again. Laughter isn't easy when you're mourning a loss, but, as Shay Bradley proved, laughter really can make everyone feel better.

Some people have quite specific requests when it comes to their funerals.

If someone doesn't play the titanic song badly on a recorder at my funeral then I'm not even gonna bother dying
— toadette (@toadette)1570488794.0

I honestly for the life of me can't say what I'd want at mine. I don't think I could pull off a recording like Shay's, coming from me it would just seem weird. And as for the funeral song, I don't know. I guess I'd want everyone to be well-fed? I'd request lots of potato chips, of all variety.

It's not as though we can speak at our own funerals...

Or maybe you can... Shay Bradley sure proved that there is a way to make your voice heard from beyond the grave.

Shay wasn't going to die without his affairs in order...

Not only did he want to ensure that everyone was looked after once he was gone, but Shay also wanted to ensure that his funeral went off without a hitch... that is, of course, other than the one he planned.

No one knew what was going to happen...

As the family stood around Shay's graveside, the priest's sermon was interrupted.  Suddenly, as though out of nowhere, the deceased's voice was heard from the pit.

The crowd of mourners couldn't help but laugh.

Shay had planned to have a voice recording play from inside his coffin after it had been put into the ground.

Shay made the recording before he died. Once it began to play, the mourners couldn't believe that they were hearing one of his wisecracks again.

"Always by your side."

Although Shay's recording was a joke meant to incite laughter amongst the mourners, it's clear that it also came from the heart. In his own way, it seemed as though Shay wanted his family and friends to know that he was still there, by their sides... making them laugh.

A friend of the family, Ciarán, shared Shay's final prank on Twitter. The post has since gone viral and been watched by over 150k.

Putting the fun into funeral...

Shay's plan to make his family laugh certainly paid off and it seems that his novel idea has moved people across the world. R.I.P. Shay, you will clearly be missed. Inspired to plan your funeral? Continue scrolling to discover the glitter coffin that might be just up your street.