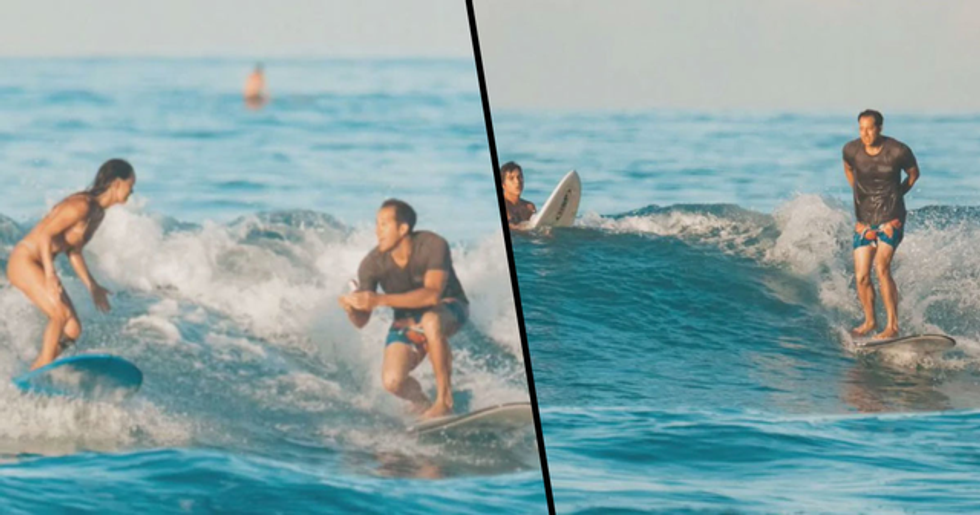 Long gone are the days of romantic, candle-lit proposals in a fancy restaurant - Wacky and outrageous marriage proposals are in, and they're here to stay.

Since the rise of the internet (and mainly social media...), couples seem to be in some sort of unspoken competition to outdo each other with their methods of proposing. And one Honolulu couple may have just topped this contest... By proposing while catching waves on their surfboards.

The loved-up and incredibly brave man, might I add, managed to wobble down onto one knee while surfing with his girlfriend. However, as she said yes, his hand wobbled and... Yep, you guessed it. The ring flew out straight into the ocean.

But all was not as it seemed. There's an incredible twist to this romantic tale that makes it that extra bit special. Keep scrolling for more...

Lauren Ohie and her boyfriend, Christopher Garth have one major thing in common...

Their mutual love of the water sport was what originally brought them together.

Lauren and Chris used to regularly surf in the same spot at Queen's Beach in Waikiki, Hawaii.

They began to recognize one another while out catching waves...

It was on this beach where Chris first asked Lauren, who's a holistic mental health therapist by day, out for a date.

After several dates at the beach, the pair clicked, and have been inseparable ever since.

The professional surfer has opened up about her past on her Instagram account and has spoken about the abusive and unhealthy relationships she's suffered at the hands of. "I’ve been through the unfortunate reality of being in verbally, psychologically, and physically abusive relationships in the past and with partners who felt the need to control who I was and how I presented myself to THEIR world because of their egos."

But her life changed when she met Chris.

She has publicly discussed how Chris changed her life for the better. "The best part is that they allowed me to manifest the kind of partner I wanted by my side. [Chris] is my biggest cheerleader and is constantly challenging me to be my best AND supports me and holds me at my worst."

Since they met in the water...

Surfing has become the couple's favorite and shared hobby, and the ocean is an extremely sentimental place for the pair.

So what better way for Christopher to pop the question...

Then by doing it while out catching waves together?

Though proposing while balancing on a surfboard will always be a risky move...

I can't even stand up on a stationary surfboard, nevermind get down on one knee and propose while it's moving.

I mean, he's completed this move before...

So surely getting down on one knee shouldn't be too much of a challenge, right?

Chris decided to take on the challenge.

He planned to pop the question while the pair were out surfing at Queen's Beach, back where they first met.

And, luckily for the couple...

There were several photographers out on the nearby beach to catch their special moment.

It was a highly organized operation...

And, somehow, Chris managed to wobble down onto one knee while riding the wave just behind Lauren.

But when she turned around, she was met with a wonderful sight.

Though Lauren admits that she initially thought the whole thing was a joke...

She was quick to realise that Chris was not messing around. Writing about the experience on her Instagram, she wrote: "I turn back to make sure he was on the wave with me and he was on one knee with a ring box and screamed out 'Lauren, I love you! Will you marry me?!'"

However, as Lauren excitedly said yes...

The thing that every man dreads actually happened... Chris wobbled, and the ring was knocked clean out his hand.

Straight into the ocean.

It's not even worth thinking about, is it?

Because Chris was prepared and had actually taken out a spare ring for the initial proposal... The actual ring was waiting for them back on the beach.

And Lauren was able to accept her actual engagement ring back on dry land.

And she couldn't be happier. Writing on her Instagram, Lauren gushed: "Of course I am beside myself that I get to spend the rest of my life with this man that I LOVE from the depths of my entire being, is a bigger feminist than I am, and makes me laugh every day and reminds me how simple and beautiful life is."

You can see a selection of snapshots of the special proposal here...

And Lauren continued: "Christopher Garth, I love you and am so grateful the stars aligned and our ancestors that came before us so beautifully orchestrated this for us! Here’s to a lifetime of laughter and keeping things simple and authentic!" For more crazy proposals, keep scrolling...