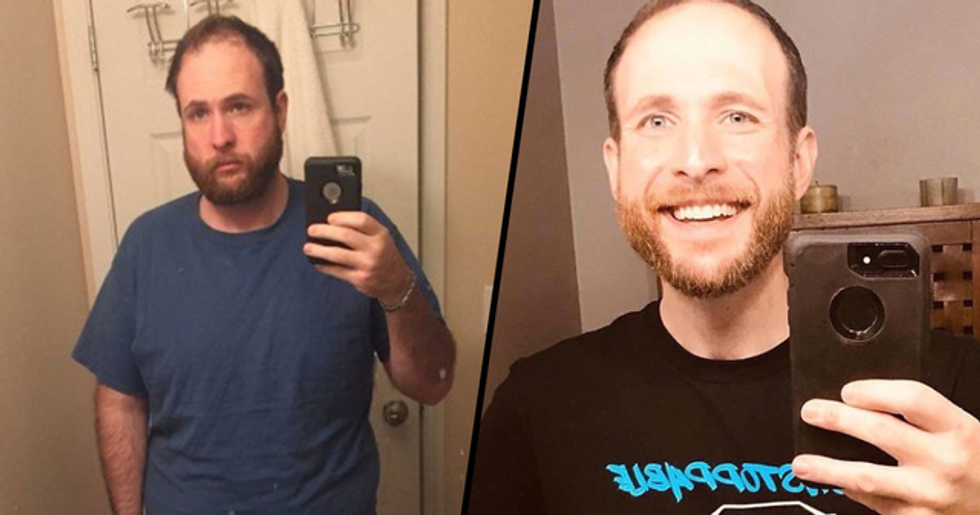 For many of us, alcohol is the perfect relaxing treat after a hard day. But for others, it can become a huge problem and lead to some really scary times. But one man's story of hope, after a dark descent into alcoholism, has gone viral this week.

The selfies he shared during his journey to sobriety really depict the massive changes he's made in his life. And people can't get enough of his inspiring tale - with many offering congratulations alongside the beginnings of their own sobriety journeys.

For many of us, having a drink is a regular part of life.

A cool beer on a summer day or a glass of wine on a Friday night can be the perfect way to unwind.

In fact, alcohol sort of permeates our culture.

The number of social activities that revolve around drinking means it's pretty much a permanent presence in our lives.

But for some people, alcohol can become a huge problem.

It is, after all, a mind-altering and potentially addictive substance - and for some, drinking can quickly become a slippery slope.

Alcoholism can be a terrifying disease.

Many who suffer from addiction issues have a long and difficult road ahead of them to recovery.

But for those struggling, there's help out there.

Alongside incredible organizations like Alcoholics Anonymous, something that can really help those in need is inspiring tales of other survivors. And one such story has gone viral this week.

This is thirty-seven-year-old engineer, Kenny D.

And he shared his inspiring sobriety journey. "I took a picture of myself the day I got my first sobriety coin, 24 hours sober. I felt so ill and I looked so bad, I wanted to remember it so I wouldn’t forget," he told Bored Panda.

"I thought my look had changed drastically so I took another selfie. I liked showing my family and friends the side-by-side of 24 hours and 30 days to show the change." Seeing this immediate difference, Kenny was inspired.

He decided to take a new picture every time he got a coin.

"Of course, [people] were skeptical because I had spent the last several years terrorizing my family and friends while I was drunk. So I kept them to myself mostly for the first year, but I always took a selfie every time I got a coin."

"I started drinking in college."

"But it didn’t become a real problem until about 10 years ago. I began drinking often and always to excess. I discovered at one point that I could not control the amount I drank once I had taken the first drink. I could not drink without getting drunk. So I decided to quit."

"I would last a few days, a few weeks, a few months, one time for a year. Always with relapses in between."

"By 2016, I had gotten to the point that I would get drunk every day. I drank 12–24 drinks a day and I was blacking out 3–4 times a week. I knew I had a problem but I didn’t know what to do. I used to stand in the bathroom and look at myself in the mirror and wish I wasn’t a drunk. I would wonder how I got this way. Sometimes I was just indifferent to whether I lived or died. I just wanted it to be over and I didn’t care how."

Kenny decided to reach out to ask for help.

"A friend of mine had gotten sober a year before and I did the only thing I could think to do. I reached out for help. I texted her and told her I had a problem and I needed help. The next morning, she picked me up and drove me to my first 12-step meeting and I’ve been sober ever since."

"On my one-year anniversary, I took my picture and posted a side by side on Reddit and called it the Progression of Sobriety."

"I thought it would just be something uplifting for people to see, I had no idea I would get the kind of response that I did. The post was flooded with comments from people asking me about alcoholism and how I stopped drinking. Asking how they can stop or how to help their own friends or family stop. And a ton of good positive kudos and congrats for my transformation. So after the first year, I felt like I’d make it a bit of a tradition to post my progress on my Sobriety birthday on November 2. I also keep with the tradition of taking it in my bathroom just for continuity. Year 2 was last year and this year was year 3."

He's spoken openly about how difficult his journey has been.

"My greatest challenge was the working of the 12 steps. 12 step recovery is a complete overhaul of your life. It is a fact-finding and fact-facing process. It caused me to face how I felt about other people and to clean up the mess I had made in my life while I was drinking. All I wanted to do was to stop drinking and to get my life back. I had no idea that I would get a whole new life that was full of more joy, happiness, and freedom than I could have possibly imagined."

But quitting alcohol has been about way more than just not drinking.

"The biggest difference between myself now and 3 years ago is that today I live my life by a set of spiritual principles. From morning to night, I run all of my decisions through a sort of spiritual filter. I do my best to not be resentful or spiteful or angry, though I am human and I have a tendency to forget sometimes. I’m not a saint. If I have a problem that I can’t tackle with stuff in my normal spiritual toolkit, I get on the phone to my sponsor or another alcoholic-in-recovery."

And he wants his story to inspire others.

"There is always somebody around to help, I just have to reach out. The most difficult part about living with such success in sobriety for me is avoiding what they call ‘resting on your laurels.’ Getting complacent and going back to my old way of doing things. I get over it by going to lots of meetings as often as I can, working with other alcoholics, and practicing the spiritual principles in all of my affairs."

"In my personal life, I’ve become an avid reader, I love to learn new things and read nonfiction and biographies. I’ve recently begun painting and that has opened up a whole new part of my brain that I didn’t know existed."

Alongside feeling better, he's noticed a physical change, too.

"As you can see from the pictures, I’ve lost 75 pounds (34 kilograms) since I got sober. I eat much cleaner and I exercise now. My favorite form of exercise is DDP Yoga. Awesome program and it completely changed my whole perspective on exercise and healthy living. 3 years into sobriety, every day is an awesome day and I can’t wait to experience the next awesome thing or meet the next awesome person whom I can learn something from."

People are loving the incredible pictures.

Many have congratulated Kenny on so dramatically turning his life around.

Many noticed one thing in particular.

At every milestone, it seems as though Kenny was smiling wider and wider.

And that wasn't the only improvement.

Alongside Kenny looking happier and healthier, Kenny's given his bathroom a makeover, too. It's amazing what you can achieve when you put drinking out of your mind.

Many have taken inspiration from Kenny's pictures.

For those struggling with addiction, the idea of finding happiness without substances is incredible.

But the biggest difference people noticed?

The look in Kenny's eyes. It really does speak volumes about the massive change he's undergone.

The pictures Kenny shared have encouraged others to embark on their own journey to sobriety.

Kenny has been offering moral support.

He's been replying to comments from others on his original Reddit thread to help encourage others to make a change.

But the thing most people have noticed?

The way the light returns to Kenny's eyes over the 3 years. It's beautiful to see. Curious for more amazing before and after addiction pics? Keep on scrolling.