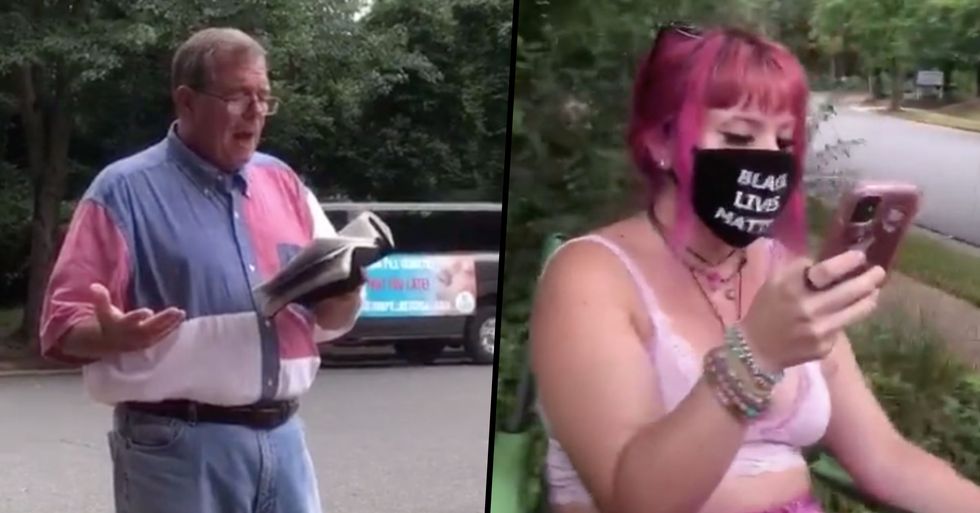 The world was knocked off its feet when Cardi B and Megan Thee Stallion released "WAP" and to say it divided people would be an understatement.

Now using the lyrics, one woman decided to go head to head with a Bible reader at a pro-choice protest and the video is beyond hilarious.

"WAP" has really divided the world.

I'm here to spill all the tea about Cardi B's new tune including how it's suddenly become the new song of praise for some feminists.

How do I even explain what "WAP" is about to you?

The Bronx rapper is well known for her brash behavior and her overly sexualized image, but her most recent single has certainly taken things to a whole new level.

And as you can imagine, the single is everything that we would have expected from Cardi B.

The word "explicit" doesn't quite cover it...

"WAP" (which stands for something that we aren't even going to go into right now) is all kinds of hip-hop badness that fans have fallen head over heels for.

The track was confirmed as being the new U.S number one on the HOT 100 by Billboard this week, earning Cardi her fourth U.S number-one single and Megan her second.

But the thing that people are talking about is "WAP"'s music video.

Set in a strange, wonky-looking house clad with wild animal deco, Cardi and Megan are seen strutting their stuff in glamorous dresses and lingerie whilst serving some fierce looks... but they aren't alone.

Even Kylie Jenner made the cut for God knows what reason...

Which then lead to a petition being launched to get the reality star removed from the video. We have so many questions!

Whoever choreographed the video had a vivid imagination...

And the dance moves thrown leave very little to the imagination, to say the least!

Fans had a lot to say about the video...

WAP is not a track you want to listen to with your family...

Especially not with your grandmother!

A vast majority feel that WAP is totally inappropriate.

@Nitrozv20 @DailyCaller Not saying she needs to be cancelled, we're just saying tis a garbage song and her message… https://t.co/crHhhtblUp
— Helepolis (@Helepolis)1597799090.0

The fact that millions of young people are being influenced by this track is extremely unsettling.

This thread I wrote about why the new Cardi B WAP song & video is terrible for our youth has been seen by millions… https://t.co/sr9GZLxVJX
— Robby Starbuck (@Robby Starbuck)1597687096.0

And many feel that the track is "disgusting" rather than "empowering", as it has been labeled in the past.

Tucker Carlson even branded the track as "garbage."

He pondered what tracks like "WAP" are doing to the younger generation and how those who are rich and famous pushing this culture onto young people "should be ashamed of themselves."

But not everyone was so cruel about it.

This user had some pretty wise words for those that are "crying" over the song.

Some even compared it to other "vulgar" songs...

That's not a sight I ever want to see again.

She claims that the rapper "owns her sexuality." We're totally here for that.

What a twist. These people are probably the same kind of watching "WAP" in their spare time.

Cardi's music should be aimed at adults only.

But it sadly seems that the younger generation has been latching on to her every word and move all thanks to social media.

The dance moves from "WAP" are now trending on TikTok and other social media platforms...

And even though the majority of those dancing to the track are adults, younger TikTokers have been getting involved.

People are seeing it as a challenge...

And it isn't hard to see why! Are those dance moves even humanly possible?!

The answer is yes, but should not be attempted unless you've stretched beforehand.

But obviously, a lot of people are still considering whether this song should be removed from some platforms, but there's no point now since almost every single person in the world has seen it.

But it seems as though the lyrics of the song are pretty versatile.

Yesterday, during a pro-choice protest, a woman named Alex decided to use the suggestive lyrics of "WAP" in order to drown out a man who was reading the Bible in front of them.

I never thought these two iconic scriptures would ever go head-to-head.

And I bet you're dying to find out who came out on top right?

Well, watch the video for yourselves...

If you want to read about why Cardi B got herself into some trouble recently, then keep scrolling...