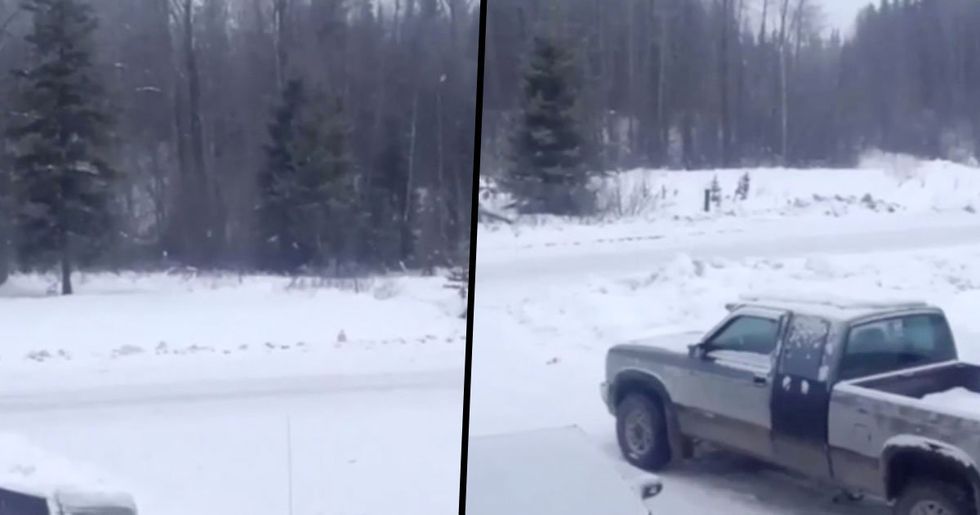 Most of us will never know what's hidden out there in the barren woodland, but there are a few brave few who have ventured close enough to get a good guess. Footage from a deserted forest in British Columbia has recently gone viral for the horrendously creepy noise that comes from it... We're talking seriously blood-curdling, spine-tinglingly spooky here, folks.

Many people have offered wild guesses as to what the noise could be... But there has so far been no solid explanation.

Keep scrolling for the full story, and to take a listen to the creepy noise yourself...

Have you ever wondered what lays out there in the remote woodland?

Are there aliens? Are there crazed serial killers on the run from the police? Or is it all just a figment of our imaginations?

Horror films have built us up to expect the worst...

And, as a result, it means that most of us aren't brave enough to venture into these remote areas of the world.

Because who wants to stumble upon ghosts and aliens?!

But some are more curious than others...

These people want to discover just what kind of creatures are hiding out in the most remote areas of our Earth.

A man, who is yet to be identified, filmed an area of snow-covered woodland close to where he lives.

And his footage has been seriously freaking people out.

The man filmed the area of remote woodland in Witset, Moricetown, at around 8:15 am.

The video itself is creepy enough without any noise...

Deathly silent, the air seemingly frozen... It looks like the start of a classic horror film, doesn't it?

A noise comes from the depths of the forest.

The noise is enough to send anyone's blood cold.

And the man filming can be heard saying, "Is anyone else hearing this too? Scary s***."

What on Earth could it be?

Well, whatever it is, it doesn't sound very happy or very friendly.

Some people weren't too spooked...

One Facebook user commented, "It's just the wind, calm down."

And while some took it all very seriously...

It's an extremely scary noise, okay?!

Others were quick to crack the jokes.

Maybe this is solid proof that Big Foot is real after all?

One guy had some owning up to do...

"It was my daily shame cry, didn't know anyone could hear. Sorry, everyone."

And some could relate to the noise a little more than others...

"It's me hitting my 30s and trying to get out of bed in the morning."

And some simply blamed the lego.

"I apologize for disturbing you, that was me, I stepped on a lego." Okay, this one could be a valid explanation.

Still not convinced by these expert theories, however?

You can watch the video for yourself here.

Though, in my own expert opinion...

It simply sounds like a pack of wolves. Or werewolves. It's your call.

We may never know the truth...

Or maybe we've just been watching too many horror movies? If you don't think this is creepy enough, keep scrolling to read about someone's terrifying experience in a haunted house...