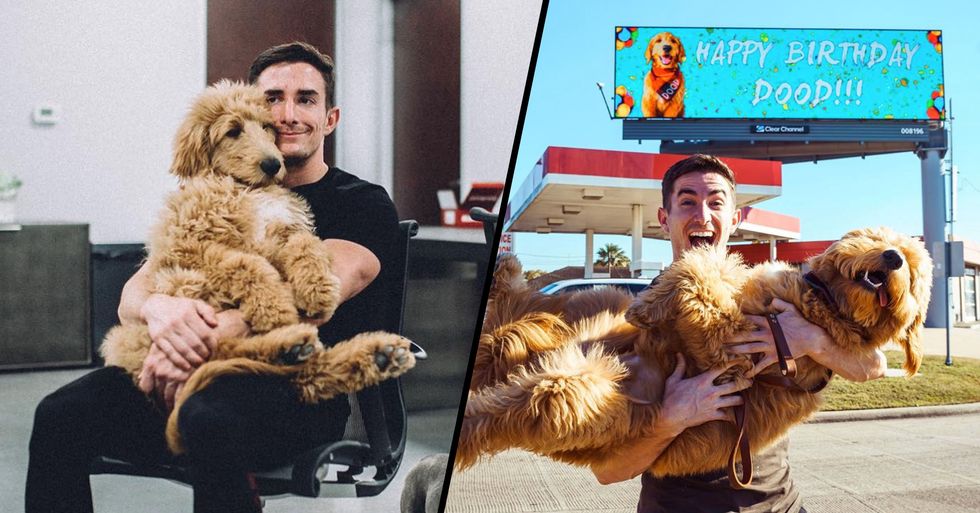 Man Rents Billboard so Everyone Will Know It's His Dog's Birthday

Birthdays are a time when we can be a bit extra.

People go a bit over the top on presents or parties or surprises. But how over the top would you go for your dog's birthday?

Would you pay and rent a billboard just to let everyone know that it's your dog's birthday? Because one guy has.

And he takes the medal for the most extra owner of the year.

Keep reading to see what he did.

Pets are our little furry friends, arent they?

We love them like we love other members of our family.

Because they feel like an extra family member, especially if you've grown up with them.

But, honestly, how far would you go for celebrating their birthday?

Perhaps buy them a new toy.

Or even a pupcake.

But would you rent a billboard for your dog so that everyone would know that it's his birthday?

Because we can't imagine that many people would.

Apart from one man, Maxx Chewning, a thirty-year-old YouTuber from the US.

Chewning knew that he wanted to do something big for his furry friend Dood's birthday and thought this would be perfect.

The video documents the day of his dog's birthday.

The vlog starts with Chewning waking up, with Dood sat at the side of him on the bed.

The pair then started their day by going for a walk.

And followed it by going to get a puppuccino.

Having began his YouTube career back in 2011, Chewning shares everything from fitness tips to days in his life.

And after enjoying their little coffee date.

It was time to reveals the big surprise to Dood.

Maxx drove him and Dood to where the surprise was.

And filmed the reveal of the billboard.

Unsurprisingly, the billboard was a first for the digital billboard company.

As they admitted they had never had a request like that before.

Despite the big surprise, it didn't receive much of a reaction from Dood.

And had a picture of Dood at the side with confetti in the background.

It was safe to say that Maxx enjoyed the billboard more than Dood.

The pair then continued with their day, where Dood was given birthday cake to add to celebrations.

Which he seemed to enjoy a lot.

If you want to watch Dood's birthday, you can check out the video here.

There's a super sweet montage at the end, showcasing the times the friends have had together over the past year.

The day can't have come cheap though.

Especially to say the dollars have been spent on his pooch.

In the video, Maxx explained why he spent so much money: “I don’t even have a girlfriend so I’m not spending any money on that, so why don’t I spend it all on my dog?"

Speaking to Bored Panda Maxx explained why he brought Dood, he said: “After living in Virginia my entire life (29 years), I picked up my businesses and moved halfway across the country to pursue bigger and better things in Texas,"

“I knew that with this new chapter in my life, I was ready to get a best friend right as I turned 30 years old."

I looked online for a breeder in Texas and found one with 1 Goldendoodle left in a litter of 6 boys," he added.

“Dood was waiting for me to arrive and as soon as I walked in and saw him, I knew he was perfect."

And you can see why.

How could anyone not love Dood.

Judging by the 128,000 views and the various comments on the video it seems Maxx's subscribers also feel the same way.

Whilst some people had bad things to say, it was only a minority. The majority of comments loved the relationship between Maxx and Dood.

One subscriber wanted the same love, commenting "I just want someone to love me the way Maxx loves Dood".

And many others also felt the same way as they added "don't we all."

Another subscriber said "May this serve as an inspiration to every dog owner out there. This is heartwarming."

We will have to see how many people decide to take inspiration from the video.

May it will be the next big pet trend.

Will you be renting a billboard for your pets next birthday?