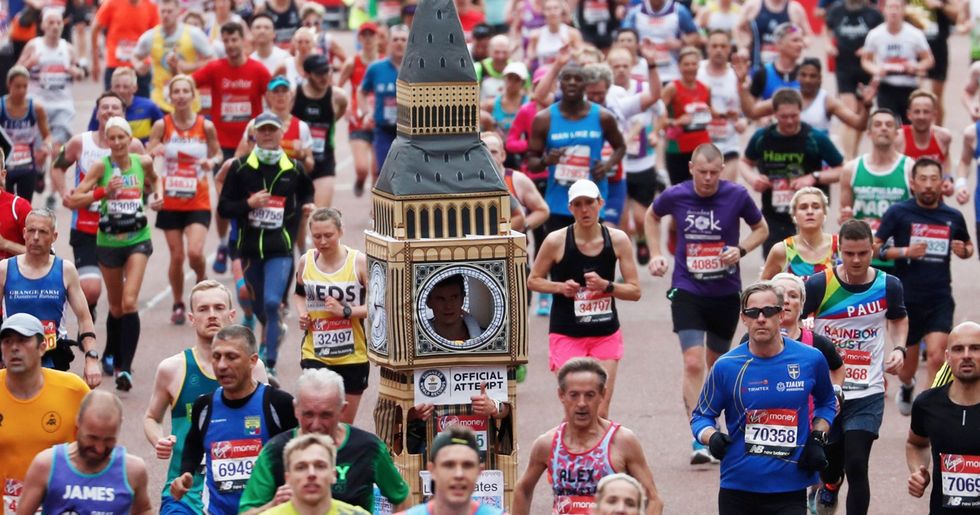 For those that do run marathons, it's a lifestyle choice that they get very hyped about. I mean, if I had the courage and strength to run a marathon, you better believe I would be talking about it nonstop and bragging to all my friends.

One man, already entirely courageous ran a marathon along with a lot of other brave people. But he didn't just run the 26.2 miles, he did it in a costume. A very over the top costume.

Luke Bates, a man from London, dressed as Big Ben, the famous architectural clock in the heart of London. He ran the entire length of it as a giant clock and man did he kill it. People laughed, but it was all for a good cause. As if running a marathon isn't already hard enough, he went above and beyond to make the rest of us feel embarrassed that we can't even run in a circle.

Running is not for the faint of heart.

For those who run as their main source of exercise, it shows an insane amount of dedication and commitment. And it might mean you are insane because running is straight up exhausting.

It's hard to understand the mind of a runner.

If you aren't into running, it seems nearly impossible to empathize with people who are runners. I have so many questions for people who love to run... Mostly, why?

It's not something you really do for fun.

People who are running aren't always having the best of times because they might be in pain from what they are putting their body through.

But runners are going to run anyways.

My running form could be described as “drunk woman slowly being chased by no one”
— Katie Dippold (@Katie Dippold)1302721464.0

Not everyone is great at it, or thoroughly enjoys it, but at least anyone can try it if they feel so inclined.

But a marathon is an entirely different game.

It's kind of hard to believe people run marathons on purpose, but for some reason they do.

This counts for something.

It was worth the effort! I really do support carb-loading.

Training is already so daunting.

It seems like a task for only the strongest minds and bodies and it takes dedication and perseverance to prepare your body for the whopping 26.2 miles it's about to run.

So how can we make running less torturous?

You could do a color run.

People throw colored powder on you while you run so it feels a little more magical. It's hard to feel entirely miserable running a marathon when you and all your friends look like a rainbow threw up on you!

You could also do a Bubble run!

They basically run in circles while a giant bubble machine spews out suds on the runners, then you get to play in the bubbles once it ends! I might actually sign up for something like that. Keyword: might.

Or the Disney Marathon!

The Walt Disney World Marathon sounds magical. Runners canter around the happiest place on earth, sometimes dressed as their favorite Disney characters. Some people get pretty competitive with it, but for the most part, it's for fun.

Or you could be chased around by zombies.

There's nothing like the fear of zombies eating your brain to really kick it into high gear. Run For Your Lives is a zombie-themed 5K that all of our doomsday prep friends will absolutely excel in.

So there are ways to have fun while running.

You can spice up the mundane routine of running with creative themes so it makes it much less painful for your body and your mind as you run.

But this guy took it to another level.

Lukas Bates signed up to run the Virgin Money London Marathon 2019 for the fifth time in his life, this time for a good cause and with a great idea.

We've got a lot of runners.

The 39th annual London Marathon brought over 42,000 runners who showed strength and resilience as they all gathered to demolish the 26.2 miles set before them.

Lukas really stepped his game up!

Lukas now goes by Ben, Big Ben that is. Lukas dressed as the famous Big Ben clock in London and sported the awesome outfit for the entire race.

This is not something you see every day.

You almost have to look twice because your eyes might not believe what they are seeing.

He was out to break records.

Lukas was trying to break the Guinness World Record for the fastest marathon dressed as a landmark, which is a very specific record to break.

Not many people could run in this thing looking this happy!

There were some complications.

Big Ben didn't take into consideration how much wind there would be, and time went backward for a minute. His costume didn't stand a chance against the strong winds, but luckily, he pushed through.

He also struggled to cross the finish line.

Just as Lukas was about to cross the finish line, Ben got in the way. His costume was a little too tall to get under the arch over the last stretch.

But he had some help.

@Nell_McAndrew This is the hilarious moment Big Ben (worn by runner Lukas Bates) had some issues getting over the f… https://t.co/Pf40yexHa5
— Evening Standard (@Evening Standard)1556468785.0

People saw the struggle and tried to tip him in just the right direction to get him to officially cross the finish line.

The officials knew this guy needed a hand.

Normally, officials aren't allowed to help runners in any way, but this was an exception!

His legs are tired, his back is tired and his shoulders are tired from carrying that costume - but Kent runner Luka… https://t.co/LQ2ozpnNgO
— KentLive (@KentLive)1556539586.0

He knew it was going to be a difficult run, but took on the challenge head-on. “It’s going to be very hard to break the record with the costume I’ve chosen," Lukas said in an interview. "I could have made it smaller and easier to carry, but I want it to be a real challenge."

It brought a lot of smiles and laughs.

To those watching and those running, seeing Big Ben put forth his best effort brought a lot of joy and encouragement.

What he did was very impressive.

It would be discouraging if a clock tower beat you in a marathon, but everyone runs at their own pace!

His final time was amazing.

He finished the marathon in 3 hours and 54 minutes. It probably would have been shorter if not for the wind and the stupid finish line arch getting in the way.

But it didn't break the record.

Unfortunately, the record was not broken despite the hope and dedication of Lukas.

But it was about more than the record.

Lukas wanted to run to raise money for Dementia and Alzheimer's awareness, as both of these diseases have affected him personally. Both of his grandmothers have been diagnosed with Alzheimer's, one of whom passed away last year.

He raised a great amount of money.

He raised over £6,300, which is about $8,100, all of which went to the Dementia Revolution, a campaign invested in Dementia research.

Every great story ends with some drama.

After the marathon, Lukas headed to a pub to celebrate his run, when someone stole the Big Ben costume.

The thief is on the loose.

They are still on the lookout for the giant missing clock, and the hope is that once it's found it will be auctioned off to donate more money to the Dementia Revolution.

But we've got a good search party.

A local runner's club posted on their Facebook page to spread the word about the missing costume and many people expressed serious concern about the stolen item.

Hopefully, the costume will be found and Big Ben will stand true and tall!

With a story like this, it's hard not to imagine that it will have a happy ending. Sharing this amazing story with your friends and keep an eye out for a giant Big Ben costume!