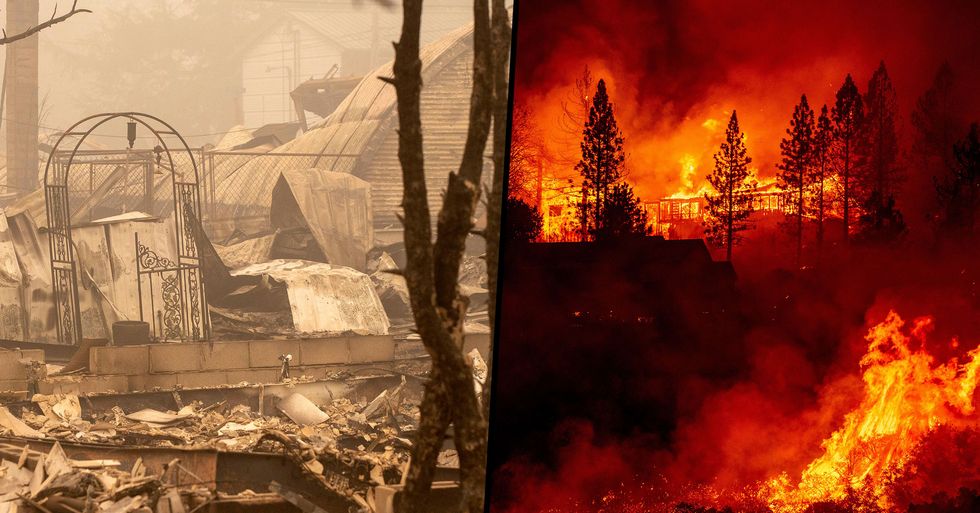 A man who was desperately searching for his wife after losing her in the Oregon wildfires asked a severely burned woman for help... until he realized that it was actually his wife he was speaking to.

Keep on reading for this devastating story and how the family has been completely torn apart...

Thousands of residents have been evacuated...

Understandably, people have been left incredibly alarmed by the shocking sights...

The El Dorado Fire, which has grown to more than 10,000 acres, was ignited when a family used a “pyrotechnic device" for a flamboyant gender reveal party. Over six-hundred firefighters were called to tackle the blaze which became so bad that it could even be seen from satellites in space.

California Governor, Gavin Newsom, was forced on Sunday to declare a state of emergency in 5 counties.

So many lives are now at risk...

And according to sources, twenty-nine people have now died as a result of these deadly fires.

Thousands of people have been left homeless while desperately searching for their missing loved ones...

And the recent story of a man searching for his wife has broken hearts all around the world.

Chris Tofte, who is from Salem in Oregon, experienced the worst possible thing from the wildfires last week.

On Tuesday, Chris went out to go and get a generator when the power went out in the family home in Marion County. His wife, Angela, and their thirteen-year-old son, Wyatt, awoke shortly afterward when their house was suddenly engulfed in flames - prompting them to flee with their dog and 3 cats.

Wyatt was separated from his mom when she was desperately trying to load the family car.

He ran into a nearby vehicle with his dog to try and shield himself from the fast-spreading fire, but devastatingly, Wyatt and his dog died from the conditions. It took a painful 2 days to find his body.

It's utterly painful to even think about.

The devastated family told CNN the body of "kind-hearted" Wyatt was found in a car with his pet dog Duke on his lap.

"After a long search for Wyatt, he was found in a car with his dog on his lap, but unfortunately, was not able to escape the fire," a family statement said.

Wyatt's grandmother and Angela's mother, Peggy, also died in a nearby vehicle...

And for quite some time, Angela herself was missing - leaving Chris in total an utter turmoil.

Chris desperately took to the burnt-out roads to search for his family...

And when he was driving in the early hours of Tuesday last week, he came across a horribly-burnt figure staggering in the middle of the road.

The person was totally unrecognizable.

Speaking to the Statesman Journal, Chris recalled how the person was wearing underwear and he explained that her bare feet were severely burned. Her hair and mouth were also completely black.

He stopped to help her into his car...

And when he explained to the severely-injured person that he was looking for his wife, she turned to him and said, "I am your wife."

The burnt person staggering along the road was Angela all along, who was desperately searching for her mom and Wyatt.

Angela was transported first to Salem Hospital, then to the Legacy Emanuel Hospital Burn Center in Portland, where she remains in critical condition.

We cannot imagine what Chris and his family must be going through right now.

A GoFundMe page was set up for Chris to try and help ease the pain slightly. "The couple's home and possessions are gone. The medical costs from Angie's physical injuries will be enormous, plus the funeral expenses for Peggy and Wyatt. Chris and Angie's life will never be the same. While no amount of money can bring back Peggy and Wyatt, our family would be incredibly grateful for any help you can provide. This fund will help Chris and Angie deal with the extreme financial devastation this event has caused," the page reads.

Rest in Peace, Peggy and Wyatt.

Our deepest condolences go out to Chris, Angela, and their family during this awful time, and we hope that Angela makes a recovery soon.