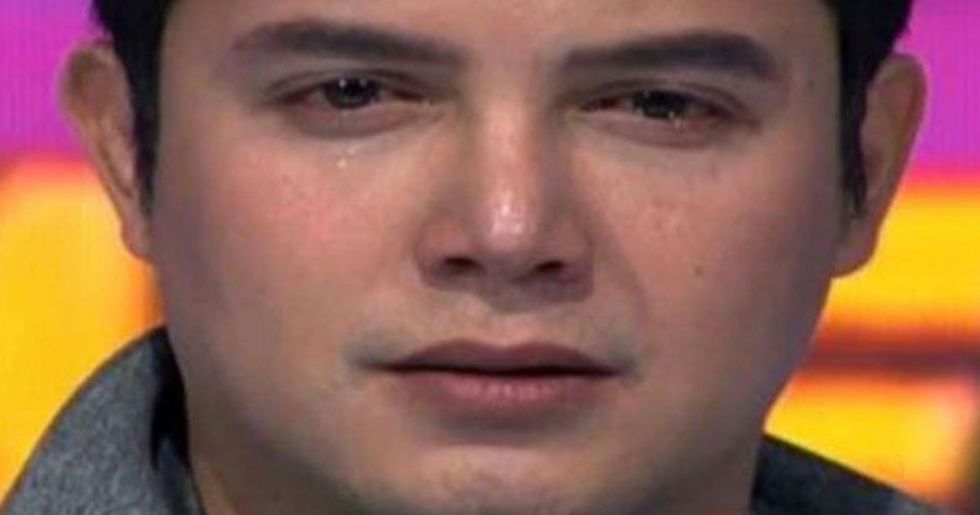 There's been a time in all of our lives when we've thought "I could do that." I'm not talking about poaching an egg or doing cross-fit, I mean those things that people get commended for.

Everyone wants acclaim, to be told that they're better or even the best at something, which is probably why, globally, we are all enticed by The Guinness World Records. Personally, it's been a long time since I've wondered about getting into the record books. That being said, I do still enjoy reading about the weird and wonderful things that people do to get into the sacred books.

Actor, Paolo Ballesteros, has made headlines this week for his unofficial entry into the World Records. I had never heard of the Filipino actor until I learned about his triumph, but upon learning about this dude, honestly, I can't think of anyone more deserving of the title.

Continue scrolling to read about Ballestero and to watch his impressive world record attempt.

I've also thrown in some other weird and wonderful official world record winners. I think it's safe to say that there's some that I could definitely attempt to beat.

*Calls work:* "Sorry I can't come in today, there are World Records I need to beat!"

via: The Guiness World Records.

If you can't manage eating a load of hamburgers...

Do you have a secret strength?

Kevin Shelley from the United States proved just how strong his head was when he managed to smash an impressive forty-six wooden toilet seats in one minute. What a guy!

How strong are your thighs?

I guess that's a bit of a strange thing to ask... I mean, we've only just met, after all! I only bring it up because Ukranian woman, Olga Liashchuk, proved hers are really strong when she made her World Record title. Olga managed to crush three watermelons in 14.65 seconds using only her thighs. I mean, I can't help but thinking what a waste of watermelon! But, eh, well done, Olga.

Every time I attempt to use chopsticks, I'll have mastered them by the end of the meal. The trouble is my technique never sticks and next time around, I'm stuck furiously trying to keep slippery noodles from falling back into the bowl. The World Record for the most M&Ms/smarties eaten with chopsticks whilst blindfolded is not one I will be attempting. But that's not to say that you shouldn't give it a go. The current champ is New Yorker, Ashrita Furman, who managed to get twenty M&Ms into his mouth using chopsticks whilst blindfolded.

Here's one for the Christmas fans amongst you.

Now, I don't know if you've noticed but, nowadays, stores start stocking chocolate advent calenders in as early as 4th July so there are no excuses not to be practicing this one! American dude, Kevin Strahle, is the current record holder for the fastest time to eat all of the chocolate in an advent calendar. I know, I know, it's pretty sacrilegious to not stick to eating one on the god-given day you're supposed to... but, eh, in the name of winning! Strahle managed to open all twenty-five boxes and eat all twenty-five little chocs in 1 min 27.84 sec. Frankly, I can't even blink that fast, so good luck to anyone trying to beat that!

Today's hero is the Filipino actor, Paolo Ballesteros, who held back the urge to blink for an unprecedented period of time.

We've all had staring contests...

After maybe thirty seconds, your eyes start to dry out, they begin to tingle, to burn, and all you want to do is blink. Your eyes beg to be rehydrated and the urge not to blink becomes impossible to ignore.

I mean, some people just don't blink that much.

If you think that you don't blink that often or have trained yourself to give the ultimate long stare, then you might think you're in for a chance at beating Ballesteros' record...

Believe me, no one is going to beat Ballesteros' record.

This guy is a machine, a non-blinking machine.

Compared to Ballesteros, the rest of us are sleepy-eyed losers.

But considering how much of an upstanding guy Paolo Ballesteros is, I don't mind that he's better at not blinking than me.

The actor is an activist for LGBTQ+ rights and has been part of some of the most groundbreaking projects in support of trans rights.

Paolo Ballesteros played the leading role in the moving story of Die Beautiful. The narrative followed a group of friends as they attend the wake of Trisha, a Filipino transgender woman. The movie takes a look back at her life, detailing the triumphs and challenges she faced as a transgender woman in the Philippines. The movie achieved critical acclaim worldwide and is a real must-watch.

Ballesteros then went on to star in the TV movie, Inay. This show was about a young trans woman trying to figure out her identity in the working-class Filipino town that she was born in. It's clear that Ballesteros is passionate about grappling with the politics within the Philippines facing the rights of LGBTQ+ people.

In his own life, Ballesteros enjoys dressing in drag.

The actor frequently posts photos looking fabulous adoring the most wonderful dresses and make-up. If you're on the hunt for a new style icon, let me introduce you to Paolo Ballesteros.

Proud and inclusive, Paolo is happy to share all of his make-up secrets with his easy to access make-up tutorials.

Well, he's got loads of them, so I assume he likes them!

He has a cute boyfriend!

His boyfriend doesn't appear to be in the world of acting. In fact, according to his Insta, he's a nurse.

Paolo is also a daddy!

It's clear that Paolo Ballesteros absolutely adores his daughter, Keira, and, by the looks of it, she adores him too.

Looks as though Ballesteros' daughter is talented too!

I wonder how she would fair against her daddy in a staring contest...

Paolo Ballesteros did not blink for one hour, seventeen minutes, and three seconds. I mean, how many Ariana Grande tracks is that? Heck, that's longer than an SNL episode, that's longer than Trump's longest Twitter break. If I didn't blink for that long, I swear, my eyes would jump out of their sockets and go find the nearest pool to bathe in.

You can watch the video of Paolo not blinking here:

Try to watch it for one minute without blinking, I dare you. Continue scrolling to read about how another wonderful actor, Hugh Jackman, accidentally secured a place into the Guinness World Record books.