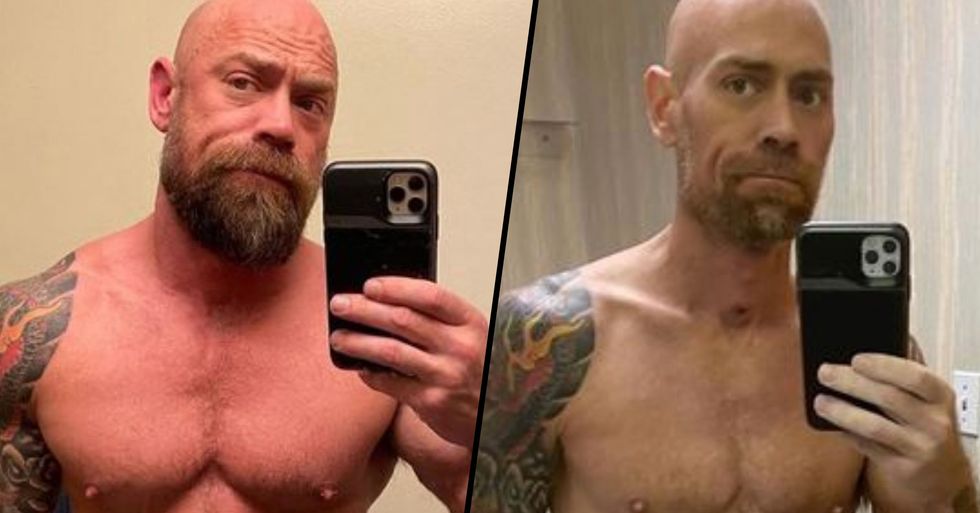 A man who recently battled the deadly coronavirus has shared some horrifying before and after photos that show the impact the virus had on his body.

This is Mike Schultz and he is a nurse who was recently infected with the deadly virus.

He decided to share before and after photos to demonstrate the impact of the virus and they are truly shocking. But firstly, let's recap a few things...

The deadly virus, that originated from Wuhan, China, has completely taken over the world...

And we are now living through one of the worst pandemics in decades.

The United States is now the worst affected country in the world...

And the amount of deaths that we have had is utterly devastating.

Even though many affected countries have now managed to keep their death toll under control and are returning to normality...

Things are far from close to being okay here in the States as the rate of infection continues to climb.

Our healthcare workers are feeling the strain...

New York came out tonight to clap for the medics on the front lines and I honestly got so emotional being part of it https://t.co/tG8cXZMzEK
— mike mytnick (@mike mytnick)1585351854.0

And we cannot thank our doctors, nurses, and carers enough for their unbelievable work during this difficult time.

But the sad reality is that healthcare workers are at the highest risk of contracting the virus...

And one nurse from San Fransico was unfortunate enough to be tested positive himself a few months ago.

And is also a body-builder, as you can see!

The forty-three-year-old works out around 6 times a week...

And he has no underlying health conditions meaning he is a very healthy individual.

In similarity to millions of others, Mike has been a key-worker working on the frontline of the pandemic.

But disaster struck back in March when the nurse started feeling unwell.

He initially felt a little bit under the weather and he didn't have a fever.

The week before, Mike and his boyfriend, Josh, had gone to Miami Beach for the Winter Party Festival, a circuit party that Hebblethwaite was working at and which drew thousands of people to the area for a week of events.

Even though Mike and the other revelers were aware of the virus spread, they continued to enjoy the festival regardless.

Speaking to BuzzFeed News, Mike said: "We knew it was out there. There were no real restrictions in place, though. No lockdowns. We just thought, 'well, we gotta wash our hands more and be wary of touching our face'."

It turns out that at least thirty-eight people who attended festival contracted the virus...

And 2 days following the festival, Mike started to feel seriously ill - his fever spiked to 103 and he started to have difficulty breathing.

Josh, who is from Boston, rushed him to the nearest hospital...

"They took him right in and didn't let me stay to say goodbye," Josh said about the terrifying experience. On his first day there, Mike was given oxygen through his nose, then via a full face mask, and then doctors started sedating him.

Within 4 days, Mike was moved to a bigger hospital...

And the nurse ended up being intubated for four and a half weeks, with Josh not being able to visit him due to hospital protocols designed to prevent infection.

And he was completely wiped of energy. "I was so weak. This was one of the most frustrating parts," he recalled, "I couldn’t hold my cellphone; it was so heavy. I couldn’t type, because my hands shook so much."

Mike was completely immobile for 4 weeks...

And even though he is now slowly on the road to recovery, Mike has been left completely shaken by the experience. "I knew what I thought going in [about the virus]. I didn’t think it was as serious as it was until after things started happening. I thought I was young enough for it not to affect me, and I know a lot of people think that."

The nurse decided to share some shocking before and after photos to drill in the message to others.

"I wanted to show everyone how badly being sedated for 6 weeks on a ventilator or intubated can be," he wrote in a harrowing Instagram post.

He was completely broken down by the virus.

"Amongst other things, COVID19 reduced my lung capacity with pneumonia. Over 8 weeks I’ve been away from family and friends... Getting stronger every day and working to increase my lung capacity. I’ll get back to where I was in healthier ways this time... maybe even do cardio," he finished by saying.

Here are the shocking photos...

And Mike's transformation truly goes to show the severity of this deadly virus.

We wish Mike a quick road to recovery!

For more on the pandemic, make sure to keep scrolling...